Joshua Brown, a witness during the Amber Guyger murder trial, was killed in a drug deal, warrants say

Brown was shot Friday night at his apartment complex on Cedar Springs Road. Officials say Brown was shot and robbed during a drug deal. 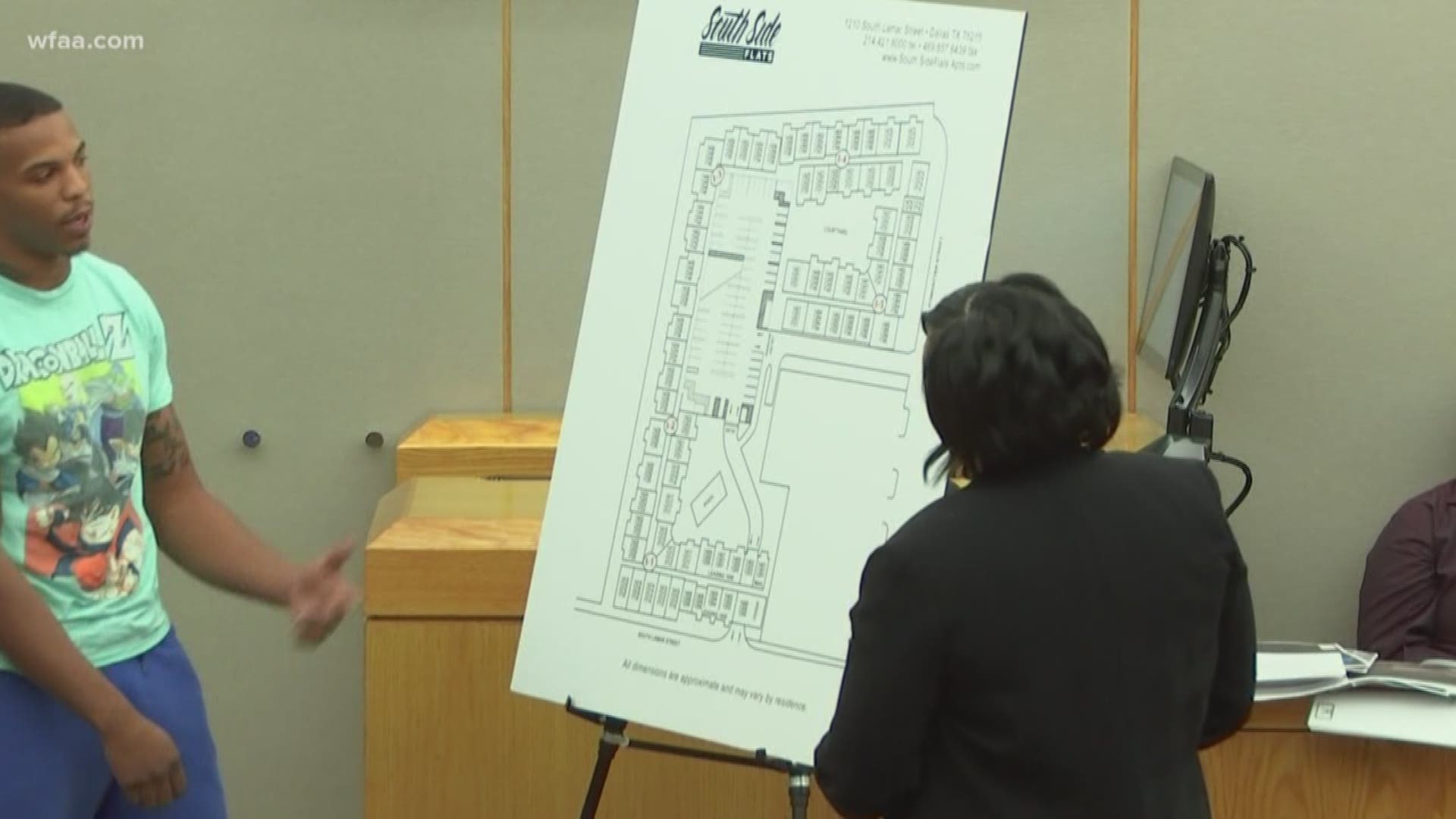 This story has been updated throughout with additional information on suspect arrests from police, arrest warrants and Dallas officials.

Police have arrested two suspects in connection with the death of Joshua Brown, who testified at the trial of former Dallas police officer Amber Guyger, officials say.

One other suspect has not been arrested yet. Police were originally searching for Michael Mitchell, 32, Thaddeous Charles Green, 22, and 20-year-old Jacquerious Mitchell.

Jacquerious Mitchell is hospitalized and already in police custody. Late Tuesday night, Michael Mitchell, 32, was arrested in Marksville, La., according to the Avoyelles Parish Sheriff's Office.

Joshua Brown was shot during a drug deal Friday night at his apartment complex on Cedar Springs Road.

Each of the three men faces a capital murder charge, police said. Authorities have issued arrest warrants for the men.

Investigators found 12 pounds of marijuana and about $4,000 in cash in Brown's apartment during a search, officials said.

And authorities have gone to two houses in Louisiana looking for the suspects, an official said.

Since news of Brown’s death broke publicly, rumors have been swirling about why he was gunned down. Many have said the Dallas Police Department was responsible for the man's slaying.

“I assure you that is simply not true,” Assistant Police Chief Avery Moore said of the rumors during a news conference Tuesday.

Dallas Mayor Eric Johnson released a statement Tuesday afternoon asking those with information on the shooting to come forward.

"I am grateful that our detectives have taken the initial steps necessary to bring closure to this case. I want to thank everyone who demonstrated patience and responsibly reserved their judgment while the Dallas Police Department gathered the facts regarding the death of Joshua Brown," Johnson said.

Brown had been shot before in November 2018 during an altercation outside a Dallas nightclub. He was one of the targets of the attack, but another man was killed in that incident.

Lee Merritt, an attorney representing the Jean family, tweeted Saturday that he had spoken with Brown’s mother and she was “devastated” by his death.

Merritt initially tweeted that Brown had been shot in the “mouth and chest.” He tweeted two hours later that where Brown was shot was in dispute and that he had heard from a witness that the wounds were to Brown’s “buttocks and side.”

Merritt also said Brown’s mother told him that Brown had “no known enemies.” He said Brown was ambushed as he was exiting his car at his apartment.

The shooting occurred around 10:35 p.m. at the Atera Apartments near the 4606 block of Cedar Springs Road, police said.

Police say when they arrived at the complex, they found a man in the parking lot with gunshot wounds. Brown was transported to the hospital where he was pronounced dead.

After Friday night’s shooting witnesses told police they heard several gunshots and saw a silver four-door sedan leaving the parking lot after the shooting. They were not able to provide a physical description of any possible suspects.

Detectives interviewed Jacquerious Mitchell in the hospital on Sunday. He said after he was shot, Green shot Brown and then took the man's gun and a black bag before fleeing, an arrest warrant says.

After the two shootings, Green told Jacquerious Mitchell to tell police that he "got robbed," the warrants.

Brown was a victim of gun violence last year.

Last November, Brown was shot and another man was killed outside the Dallas Cabaret strip club on Walnut Ridge Street in Northwest Dallas.

Kendall Deshonn Morris has been indicted on charges of murder and aggravated assault in connection with the incident. He is currently out on bond.

An arrest affidavit states that Morris and another man were at the club celebrating a birthday and encountered Brown at the strip club.

The other man wanted to fight Brown and the two men fought in the street. When Brown and his friends attempted to leave, Morris pulled a gun out of a car and handed it to another man, records show.

Nicholas Shaq'uan Diggs was killed and Brown was hit in the foot.

There is no indication that Brown’s death was connected to the prior shooting.

Brown was a witness in the murder trial of Amber Guyger, appearing on the stand on Sept. 24. He lived across the hall from Botham Jean.

The men met earlier in the day on Sept. 6, 2018, after an apartment manager knocked on Brown's door and told him about a noise complaint.

Later that night, Brown was returning home when he heard loud voices as he walked down the hall.

He said it sounded like "two people meeting each other by surprise" but couldn't make out what the voices were saying, but heard gunshots.

On Sunday, Merritt acknowledged that the 2018 shooting made Brown nervous to testify.

“He was concerned that someone would try and come finish the job,” Merritt said.

Despite his reluctance to testify, Merritt said it was his plan to ask Brown to take the witness stand again.

“When we move forward with our civil trial, he was one of the first people we planned on calling,” Merritt said. “And now is no longer available.”

Speaking about the investigation into Brown's murder, Merritt said that "there is no link to law enforcement or to the trial directly, but it’s something worth looking into."

Merritt tweeted Tuesday morning that Brown left for California before the trial began to avoid testifying. He was threatened with jail time if he didn't return, Merritt said.

Dallas police ask anyone with information to contact Detective Jacob White at 214-671-3690 or via email at jacob.white@dallascityhall.com. Please refer to case No. 202433-2019. 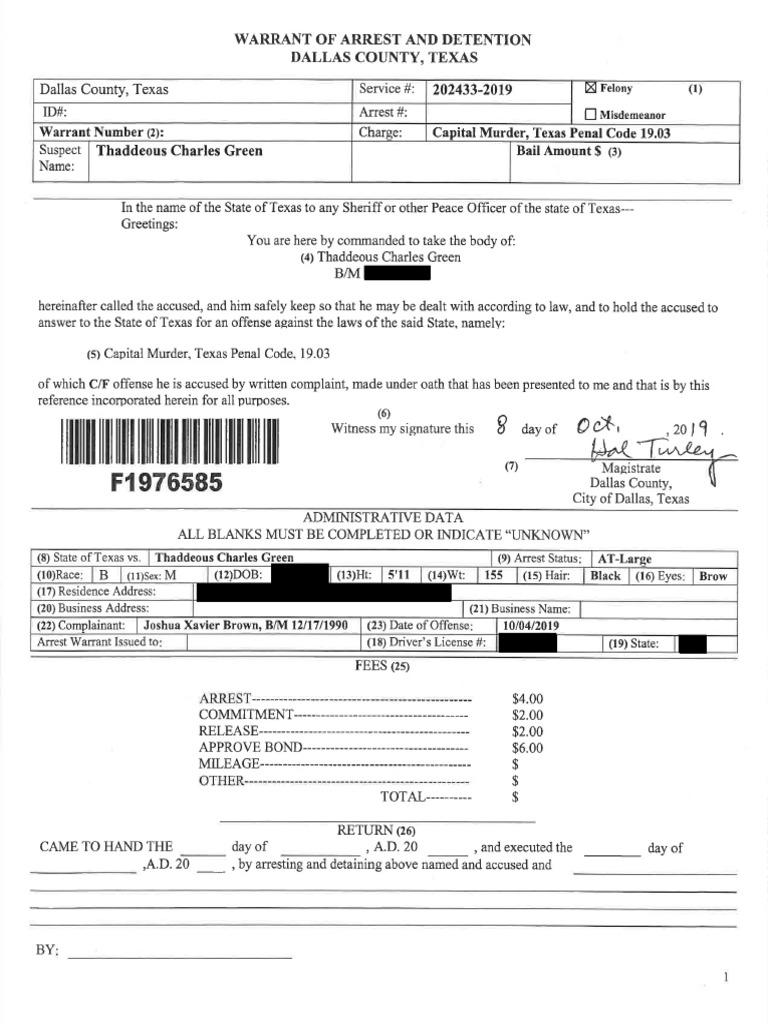