'It's about to go down': Meridian man brags about joining riot at U.S. Capitol

It's unclear whether Josiah Colt, a small business owner and former Mountain View High student, will face criminal charges in connection to the riot. 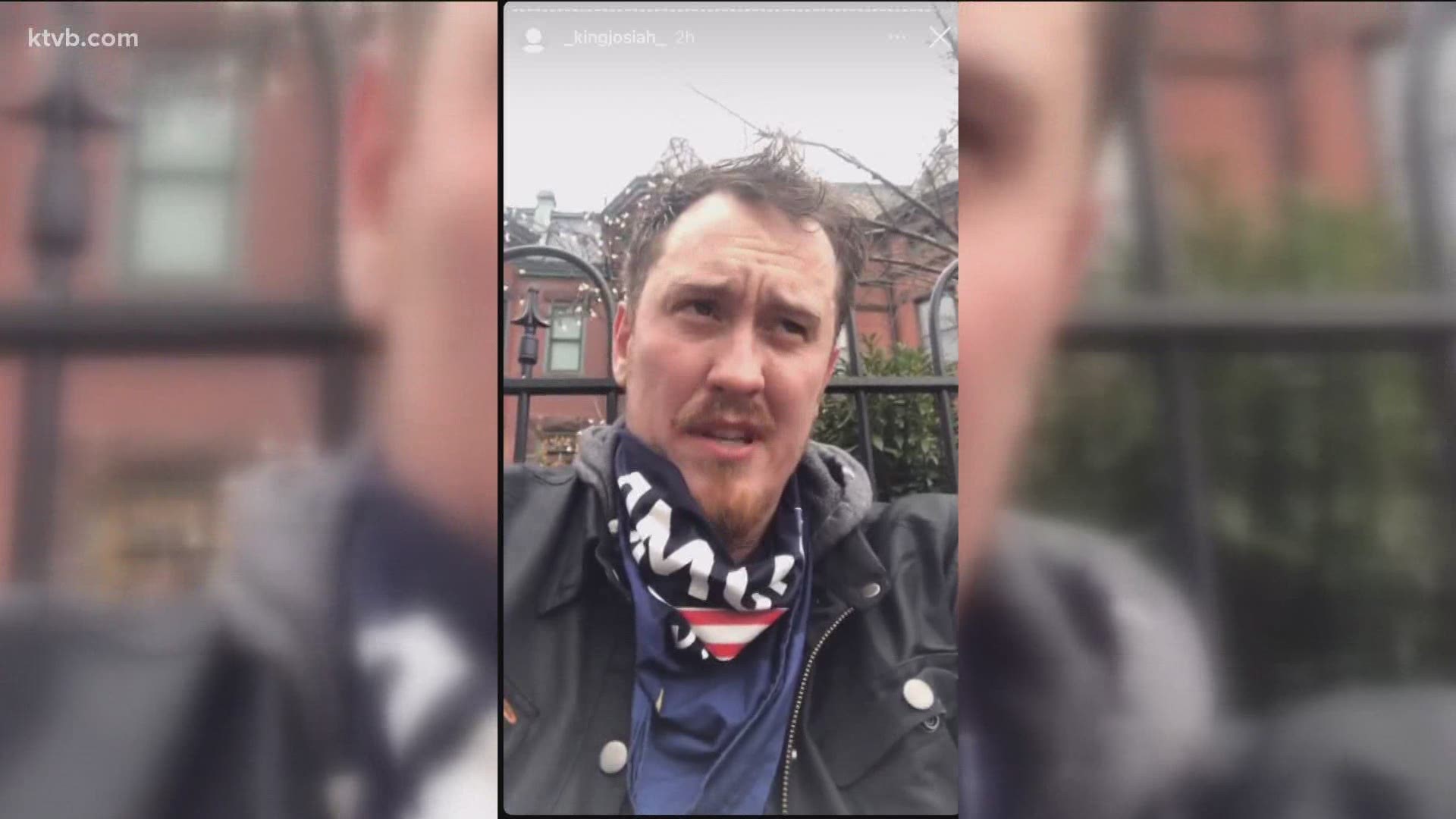 BOISE, Idaho — A Meridian man said in videos posted to social media that he was among a group of extremists who stormed the U.S. Capitol Building Wednesday. The mob fought with police officers and smashed their way into the building in a bid to halt legislators from confirming Joe Biden as the lawfully-elected next president of the United States.

It's unclear whether Josiah Colt, a small business owner and former Mountain View High School student, will face criminal charges in connection to the riot but D.C. Metro Police issued a wanted poster for him, along with about two dozen other people who broke into the Capitol.

Four people died in the clash, including a woman shot to death by Capitol Police, and several dozen were taken into custody.

Colt recorded himself in Washington D.C. the evening before the failed insurrection, walking through the district's downtown area and attending a large gathering in support of President Donald Trump, who lost his reelection bid in November by more than 7 million votes.

"We're like two blocks away from Liberty Square, and like there's a ton of police here, naturally," Colt says into his cell phone camera at one point. "It's definitely going down tomorrow."

In another video posted later that evening, Colt - wearing a helmet and Trump neckerchief - acknowledges that the planned conflict may turn violent.

"It's time to take back our freedom. It's going to be crazy tomorrow," he said. "Praying that everybody are able to prove a point without violence, but you don't know, you don't know how it's going to go down."

Later videos show the aftermath of the Meridian man's companions accidentally releasing bear spray into the van in which they were riding, and Colt wondering aloud in his hotel room whether he should bring a gun to the rally at the Capitol, even though he notes that would be illegal.

"For the camera's sake, we're definitely not going to carry," Colt says, smiling.

Speaking to his supporters Wednesday, Trump said he would “never concede” and repeated false claims that the election victory had been "stolen" from him, before encouraging the crowd to go to the Capitol building where the process of certifying the Electoral College votes was underway.

"I know that everyone here very soon will march down to the Capitol to peacefully and patriotically make your voices heard," Trump said, promising to join his supporters in the march.

Trump did not, in fact, join the crowd in walking towards the Capitol. But Colt apparently did, recording cell phone video of himself among the throng, as the building's distinct white dome rises ahead.

"We're headed to the Capitol right now, it's about to go down," he says as he walks. "It's a historic day."

As Colt predicted - but perhaps not in the way that he intended -  what happened next will make history books. Rioters overwhelmed the Capitol Police and forced their way inside by breaking windows and doors. Once inside the Capitol, the mob then proceeded to overrun the building, toppling furniture and defacing statues and walls. In the pandemonium, lawmakers were told to take cover beneath their chairs if necessary, then ultimately evacuated to safety.

A protester hangs from a balcony in the #Senate Chamber after Trump supporters breached the U.S. Capitol in Washington, DC #USCapitol #CapitolBuilding 📷: @WinMc pic.twitter.com/pzRG8DeNq1

Colt did not upload any videos taken inside the Capitol, but admitted in a video taken outside that he was among those to breach first the building, then the Senate chamber.

Huffington Post reporter Igor Bobic captured photos that appear to show Colt inside the Capitol. In one, which has been widely distributed by news organizations and on social media, a man seated in a chair on the Senate dais raises his fist. Another image, captured by a Getty images photographer Win McNamee, shows a man that appears to be Colt dangling from a ledge in the chamber.

Colt was not among those arrested at the scene, although both the FBI and Metropolitan Police have indicated that they are seeking to identify and prosecute those who participated in the riot. The chaos has been widely condemned by lawmakers, including each of the four members of Idaho's congressional delegation.

Records filed with the Idaho Secretary of State's Office shows that Colt is the owner of FunnelCraft.co, the site for which has also been taken down. The Secretary of State lists an address at a Meridian apartment complex.

Colt has little criminal history, save a resisting and obstructing conviction in 2012 and driving without privileges in 2011.

In a video uploaded not long before his account was deleted, Colt defends his actions and alludes to the photos linking him to the riot.

"I didn't hurt anybody in there, yeah I did sit in Nancy Pelosi's seat," he said. "She shouldn't be there, she doesn't represent the American people."