Tiffany Moss is accused of starving her 10-year-old stepdaughter to the weight of a toddler. 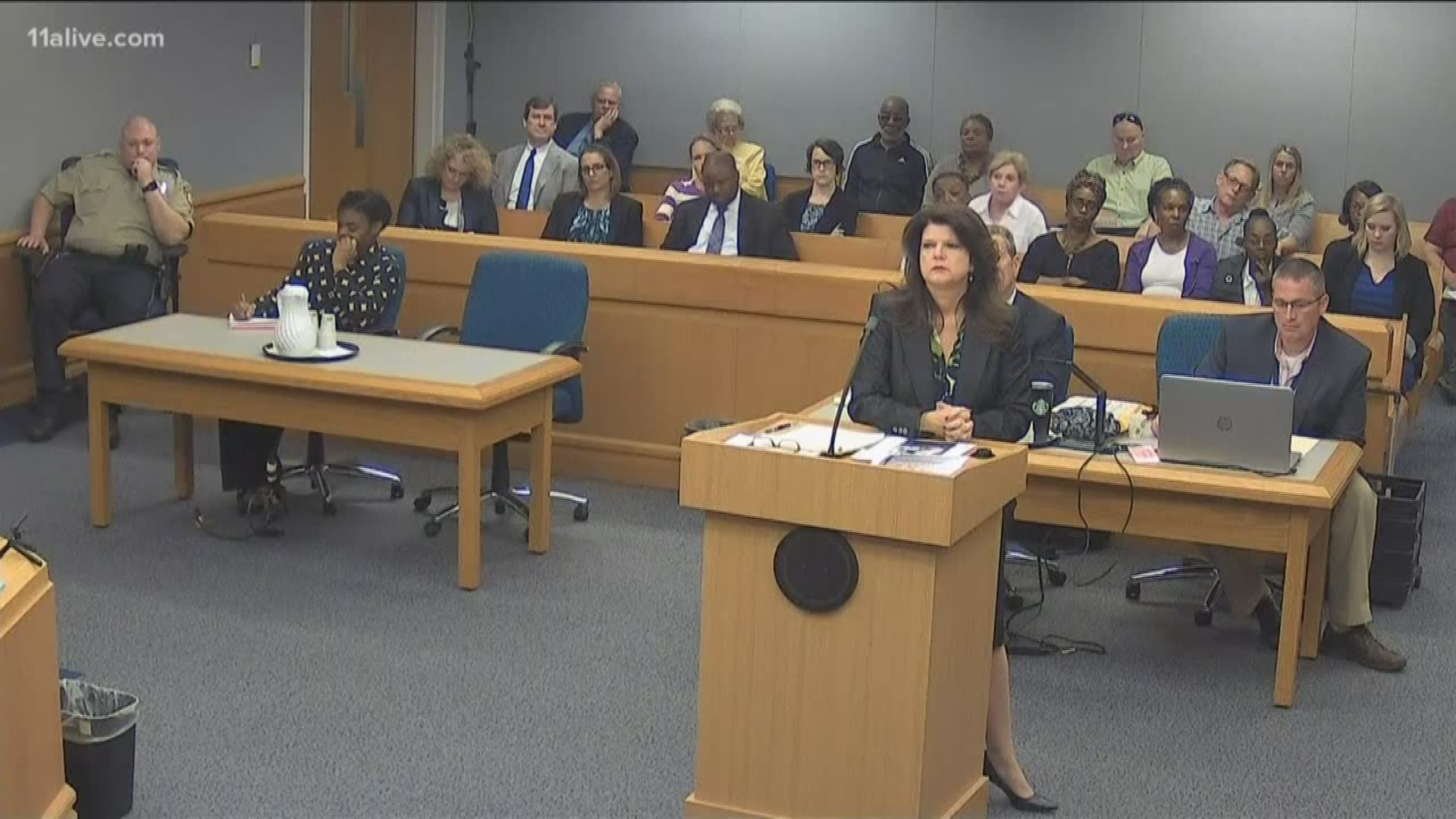 LAWRENCEVILLE, Ga. — Jurors silently cried in the jury box Friday as they viewed the pictures of Emani Moss' emaciated and burned body. It came during testimony from the final witness, the medical examiner that performed the little girl's autopsy.

“She was more or less skin and bones," testified Michelle Stauffenberg, medical examiner.

After Stauffenberg testified starvation was how Emani died, the District Attorney rested his case. Moss said she had no questions and would call no witnesses in her defense. Her fate is now in the hands of the jury.

Earlier Friday, the lead detective in the case testified in her stepmother's death penalty trial. Tiffany Moss is representing herself in the trial that's been underway in Gwinnett County all week.

Emani was 10 years old when her body was found burned and stuffed into a trash bag in an apartment complex in November 2013. She weighed just 32 pounds.

If she were living, Emani would have turned 16 on Tuesday, April 23.

Officer Colin Flynn testified Eman Moss, Emani’s father, originally told him Emani drank “a chemical” and died. The investigator testified it was apparent as soon as he saw Emani’s body that her death was not caused by accidental poisoning but, rather, by something “long term.”

MORE | Days after she died in her room, dad testifies that he tried to cremate her

At this point in questioning, Eman decided to confess. He told Officer Flynn about the plan he and his wife came up with to hide Emani’s murder: they would report Emani as a runaway who never returned home.

Text messages were also introduced Friday that were sent to Eman from Tiffany on the days surrounding  Emani’s death.

Eman listed Tiffany as ‘Sexy Wifey’ in his phone. Tiffany texted Eman to tell him she and their other children were sick with a fever one day. At this time, Emani was lying close to death in her bed, unable to move or talk.

Another text from ‘Sexy Wifey’ to Eman came a day or two after Emani died. Tiffany was apparently responding to a missed call from Eman. The text message read:

(Sexy Wifey to Eman Moss): ‘My bad, babe. On the phone with Emani’s teacher…. Emani wouldn’t even talk to her.’

At this point, Emani was already dead and her body was in the back of Eman’s truck in a trash can.

The most significant development of the morning came before the jury entered the room. One of Moss’ standby attorneys asked the judge for a meeting. District Attorney Danny Porter objected to that request, stating the lawyers were not representing Moss but were only her standby attorney.

At that point, Moss told the judge she was now working with her standby lawyers and was also requesting this meeting. The judge met with Moss and her standby attorney later Friday during a closed meeting. He said he would take no action on their request and that the case would proceed forward.

Listen to the exchange where Moss not only speaks but also smiles and laughs.

‘No questions, your honor’

This has been a fast-moving trial, primarily because the defendant has declined to question any of the witnesses. Moss repeatedly said ‘No questions, your honor’  when asked if she wanted to cross-examine the witnesses.

On Thursday Eman Moss took the stand to testify against his wife. He told the jury a story of a family mired in abuse, neglect and denial.

Eman Moss told how Tiffany Moss was convicted of abusing the little girl shortly after they were married in 2010.

“In 2010 Tiffany spanked Emani,” explained Eman Moss. “She had whips all up her back, her legs. A belt whip.”

Tiffany Moss eventually took a plea deal and was sentenced to probation. However, with her court record she could no longer work in her chosen field, early childhood education. That’s when Eman Moss said things got worse between daughter and stepmom.

“It was rough,” said Eman Moss when asked about the stepmom/daughter relationship after the conviction. “Going back to 2010 it was like a love-hate relationship.”

Eventually, the couple regained custody of Emani. The father detailed the next few years of their lives which consisted of moving from place-to-place, Tiffany giving birth to two children, and Eman’s struggle to support the growing family by working two jobs.

Under questioning from District Attorney Danny Porter, Eman Moss told how his daughter had some sort of seizure and never recovered. She eventually passed away in her own bed on Oct. 28, 2013. He learned of the death when Tiffany Moss called him at work.

When Eman came home from work that day he said his family seemed normal.

“Tristan (his son) was running around. Emma (his daughter) was in the pack and play and Tiffany was watching TV,” testified Eman Moss.

Eman Moss went on to tell how he and his wife tried to burn Emani’s body in an attempt to cover the crime. He also told how he finally called police to notify them of the little girl’s death. She was found in a trash can on a grassy area near the family’s apartment.

Eman Moss is serving life in prison without parole under a plea agreement for his role in the case. It’s the same plea agreement Tiffany Moss was offered but rejected.

If convicted and sentenced to death, Moss would be just the third woman executed in Georgia.