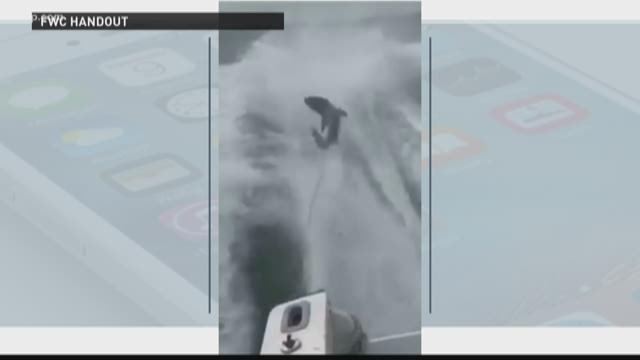 MANATEE COUNTY, Florida -- Three men are charged with animal cruelty for dragging a shark behind a boat at high speed, and no one is as pleased with the development as the man who posted the video on the internet.

FWC says comments and the laughter heard on the 10-second video plus 60,000 pages of documentation lad to the arrests of Michael Wenzel, 21, Robert Lee Benac, 28, and Spencer Heintz, 23.

One man is heard saying in the video, “Look, it’s already almost dead,” as they watch the shark bounce and skim the water.

“These three guys are doing something inhumane … (I've) never seen anything so barbaric!” said sports fisherman Mark the Shark out of Miami. The captain, who legally changed his name from Mark Quartiano, has been fishing sharks for 45 years.

“I’m glad we exposed them.”

Mark the Shark says he received the now-viral video on July 24 from Wenzel and Benac. The two had been fishing with Heintz and Nicholas Burns Easterling.

He says they probably thought he’d approve of the video.

“When I saw it, I couldn’t believe it," he said. "I was appalled. Nobody does this to any animal. What kind of human being are you?"

He posted the video on Instagram, and it went viral. So did the outrage.

The call for justice led to a 4-month-long investigation by FWC and the Hillsborough State Attorney’s Office.

Hillsborough County’s State Attorney Andrew Warren said the investigation took months because they want to make sure they could prove the charges beyond a reasonable doubt.

The probable cause affidavit states the men were fishing off Egmont Key when they caught the 6-foot-long black tip shark. FWC says several phone videos and social media postings by the men showed Wenzel shot the shark in the head once.

The men are heard laughing as Wenzel drove the speeding boat dragging the shark.

“The average fisherman doesn’t think of doing anything like that,” Mark the Shark said.

FWC says comments made by Benac, who is the son of Manatee County Commission Chairwoman Betsy Benac, and three scientists’ expert opinions prove the shark was most probably alive.

“Yank it away, yank it. It’s not the first time they’ve done something like this, let's make sure it’s the last time,” said Mark the Shark.

FWC says a previous complaint was filed against Wenzel in 2015 for alleged mistreatment of marine life was closed in January. There were no charges.

This time, Wenzel, along with Benac and Heintz, were arrested thanks in part to the evidence they shared on social media.

FWC did not charge Easterling, the fourth man on the boat. Investigators say he provided information and cooperated with investigators.

The men face up to 5 years in jail and 5 years probation.

Mark the Shark said, “I think they get jail time and be fined too.”