Student hit and killed at bus stop in Indiana

Police were able to take the driver into custody a short time after the crash. 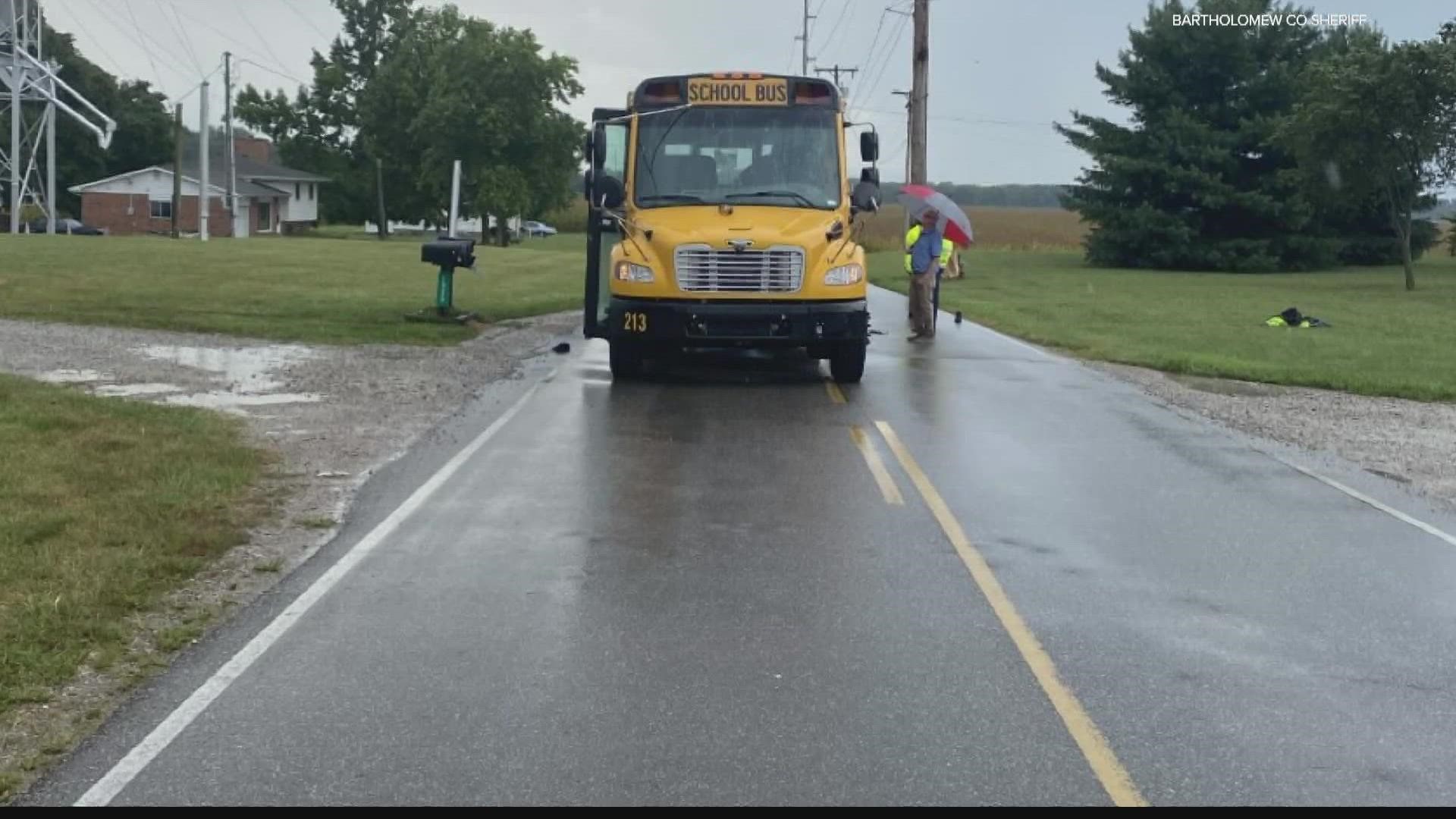 BARTHOLOMEW COUNTY, Ind. — The investigation into a Bartholomew County student killed by a hit and run driver is far from over despite an arrest in the case. Shiam Sunder Shankara Subramanian, 25, is behind bars after an eyewitness told investigators he was the one who struck a student and kept driving.

Shankara Subramanian is charged with leaving the scene of an accident resulting in death and passing school bus when arm signal is extended causing death.

It happened just before 7 a.m. on Aug. 30. Witnesses said 16-year-old Lily Streeval crossed South Gladstone Avenue to get onto her stopped school bus when a passing car didn't stop and hit her.

The car then took off. A witness to the student being hit went after the car. According to court documents, when the witness caught up with Shankara Subramanian and told him he had hit a child, Shankara Subramanian tried to drive away and got stuck while turning around in a yard.

Shankara Subramanian's white Honda civic had a shattered windshield, a dented hood and other damage. According to court documents, he told officers he had seen flashing lights and hit something on his way to work.

Streeval was rushed to the hospital but died of her injuries. She attended Columbus East High School. In many cases, school districts activate their crisis team to help grieving students and faculty members cope with tragedies like this.

It is with extreme sadness that we grieve the loss of Lily Streeval, a junior at Columbus East High School. Lily was fatally struck this morning, Monday, August 30, 2021 by a hit and run driver while attempting to board her school bus.

As was reported by the Bartholomew County Sheriff’s Office, Lily was attempting to get on a stopped school bus when she was struck by an oncoming vehicle. The driver of the vehicle fled the scene and was followed by a witness who observed the crash. The suspect was located a short time later on County Road 250 East where he was taken into custody.

Lily was transported to Columbus Regional Hospital where she was pronounced dead as a result of her injuries. Due to the ongoing investigation into the hit and run crash, we continue working with the Bartholomew County Sheriff's Office to assist in every way possible.

Dr. Roberts stated, "As a school corporation, we experienced a devastating loss this morning. Our hearts go out to Lily’s family, friends, classmates and teachers who loved and supported her. She was full of life and enjoyed attending Columbus East High School. Auto Tech had emerged as her favorite class and she was thinking about a career in this area. We will miss her greatly."

By Monday afternoon, a small flower memorial was already set up along the side of the road in memory of the teen.

Credit: WTHR
Flowers are set up along Gladstone Avenue in Columbus in memory of 16-year-old Lily Streeval, who was hit and killed by a car while she was getting on her school bus.

"This is a newer school bus involved, so it may have cameras not only on the inside of the bus but also on the outside including the extended stop arm," Lane said. "It's sad when anyone is struck and killed in a hit-and-run, but this is so sad because when it's a student, it is preventable."

Gary Saewert lives on South Gladstone Avenue, where traffic is always heavy, especially during school bus time. His wife got his attention after opening the blinds at home and seeing a lot of flashing lights.

"She said, 'Hey, get up, there is something serious happening outside,'" Saewert said. "There is always a lot of traffic out here going both ways. They were not paying attention like this one here. I don't know what was happening, it's frustrating."

A judge ordered Shankara Subramanian to surrender his passport and he is being held on a $500,000 bond.

RELATED: 1 dead in crash near Camby