Teen arrested, charged in sexual assault of woman who was followed from gym 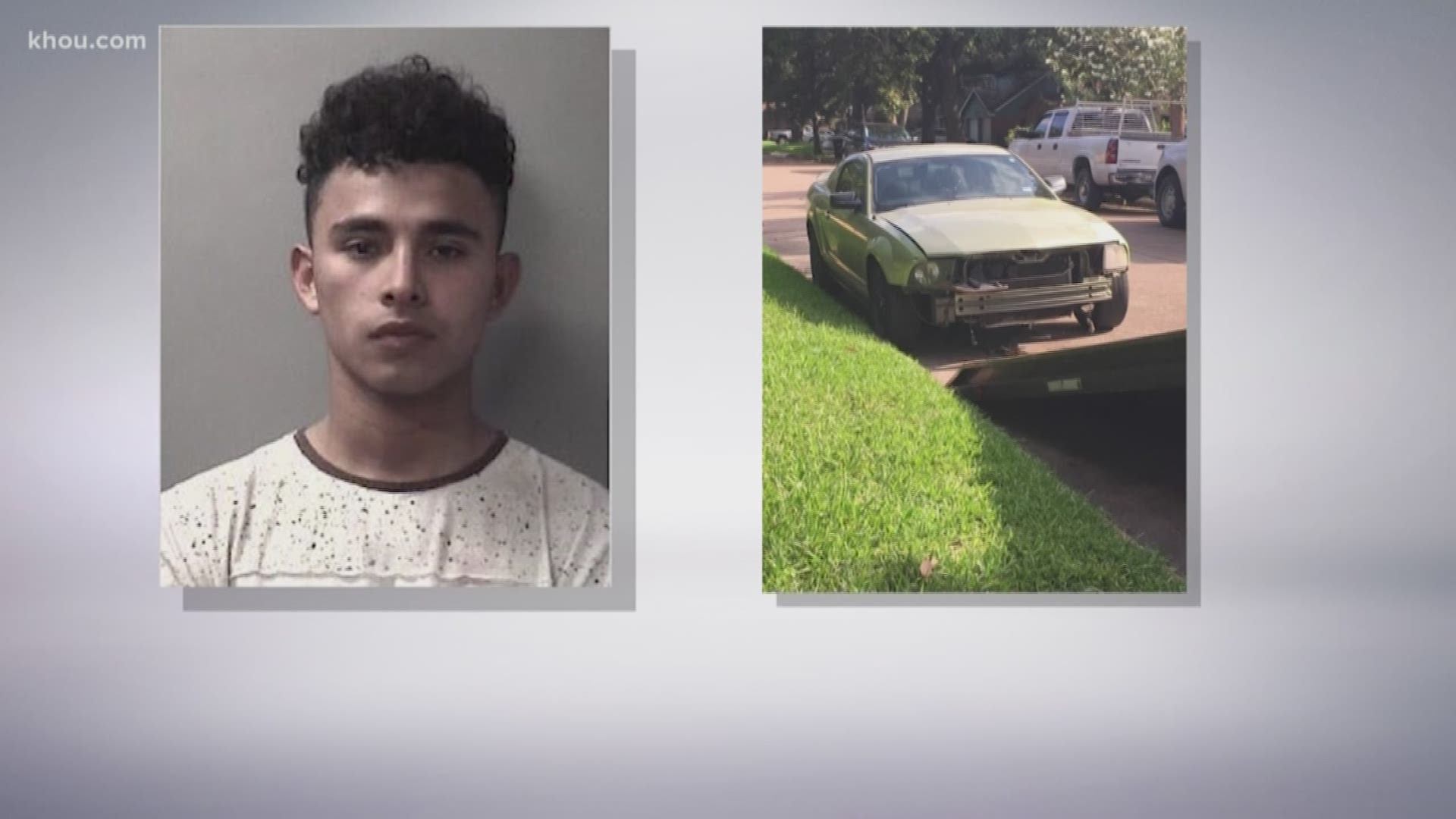 PASADENA, Texas — Police have arrested and charged a teenager in connection with at least one sexual assault where a woman was targeted as she left a Houston-area gym.

Carlos Eduardo Guevara, 18, has been charged with aggravated sexual assault and aggravated assault with a deadly weapon. He was found in the 5800 block of Alvarado in southwest Houston after a witness reported spotting the lime green Ford Mustang police had been looking for.

Guevara was arrested at his home Thursday night. Police say he lived with his father and his grandmother. The family was not aware he was behind the assaults.

During a press conference Friday morning, Pasadena police said Guevara changed the appearance of the green Mustang involved in the crimes.

Thursday evening, Guevara moved the car from his driveway to the street and then rode away on a bicycle. He was questioned and then arrested a short time later.

Guevara had sandpaper and paint swatches in his pockets when he was found, investigators said.

Guevara told detectives he went to an AutoZone to buy paint because he was afraid police were going to find the car and link it to the crimes, Detective Sebastian Mata said during the press conference.

“Throughout the interview Carlos was very upset at what he had done," Mata said. "I asked him several times if he had ever done it before. He said that he never did. He never told me as to why he did it.”

Investigators also said they found the mask he used during the assaults inside the family's home.

All three of the crimes happened late at night, around midnight, and all of the victims were women chosen at random in their early to mid-20s, investigators said.

"He would sit in the parking lot, watch them walk to their cars and then follow them," said Pasadena Police Chief Josh Bruegger.

"Our hearts and thoughts are with the victims of these horrific attacks. We would like to extend our sincere gratitude to the Pasadena law enforcement for their swift action in this case. The safety and well-being of our members and employees is our top priority, and we are grateful the suspect has been apprehended. We have confirmed that the person arrested was never a Fitness Connection employee nor member of our clubs at any time. For additional information, please contact the Pasadena Police Department.”

"I am confident this is the individual and I don't have any evidence that anyone else was involved." Chief Bruegger said.

Chief Bruegger said Guevara sent a link to a news story about the crimes to his dad on Wednesday. Guevara allegedly told his dad that it wasn't his vehicle and he wasn't involved in the assaults.

The District Attorney's Office has requested no bond be set. Missouri City Police are also planning to file charges against Guevara.

Chief Bruegger said he had no criminal history and there is no known motive at this time.

Bruegger thanked the media and the public for sharing out photos and videos of the green Mustang so quickly. He also expressed the importance of the public making anonymous tips to Crime Stoppers. He said a tip led investigators to the vehicle which led to Guevara's arrest.

"I believe this was the beginning of a serial rapist." Chief Bruegger said.

The police chief said Guevara came to the U.S. two years ago from El Salvador. He’s being held on an ICE detainer.

Guevara has an ID with Westbury High School, but it's unclear if he is a current student at the school.

Chief Bruegger is grateful for the victims who came forward.

“Obviously very traumatic psychologically, emotionally and for people to come forward it helps us to be able to catch these bad guys today so they don’t do it again," Bruegger said.

Missouri City Police are expected to file charges as well.

If found guilty, Guevara could spend the rest of his life in prison.

KHOU 11 News spoke with the teen's father on Friday before the arrest.

"It can't be him," said the teen's father. He said he's shocked and confused that his son was being questioned at all.

He said he saw his son's green Ford Mustang on the news and he asked the teen about it.

The teen said he plays soccer at night and sometimes he lets his teammates borrow the car.

The teen's father said his son moved to Texas from El Salvador two years ago and is focused on his studies and soccer.

The man says his son is 17 years old but Pasadena Police are saying the suspect is 18 years old.

The teen's green Mustang was seen in surveillance footage and is believed to be linked to all three sexual assaults. It was found in southwest Houston on Thursday.

Police say at least three women have been followed home and two of them were assaulted after leaving Houston-area gyms.

One of the women told police she was followed home after she left a Pasadena gym and was confronted by a man at gunpoint before he sexually assaulted her.

In the Pasadena incident, police said the woman was leaving Fitness Connection in the 3900 block of Spencer Highway just after midnight Tuesday when a man followed her to her home in the Mustang.

They said when the woman walked to her front door, the suspect confronted her and forced her back into her car at gunpoint.

According to police, the suspect demanded the woman drive to the 2000 block of Lamar where he sexually assaulted her before leaving the scene.

Investigators said Missouri City Police have an April 2 case almost identical to the one in Pasadena this week.

Missouri City Police said officers were flagged down just after midnight April 2 in the 15200 block of Gregory Boulevard by a woman who said a man confronted her outside her home after leaving a gym.

The woman told police the man pointed a gun at her while she was inside her car and demanded he let her inside.

Officers said the man drove the woman to the 11700 block of Willowdale Circle where she was sexually assaulted in the backseat at gunpoint.