'He writes his own rules': Man accused of killing his wife has bonded out of jail 3 times, family says

Anyone with information that could help investigators can call Houston Crime Stoppers at 713-222-TIPS. 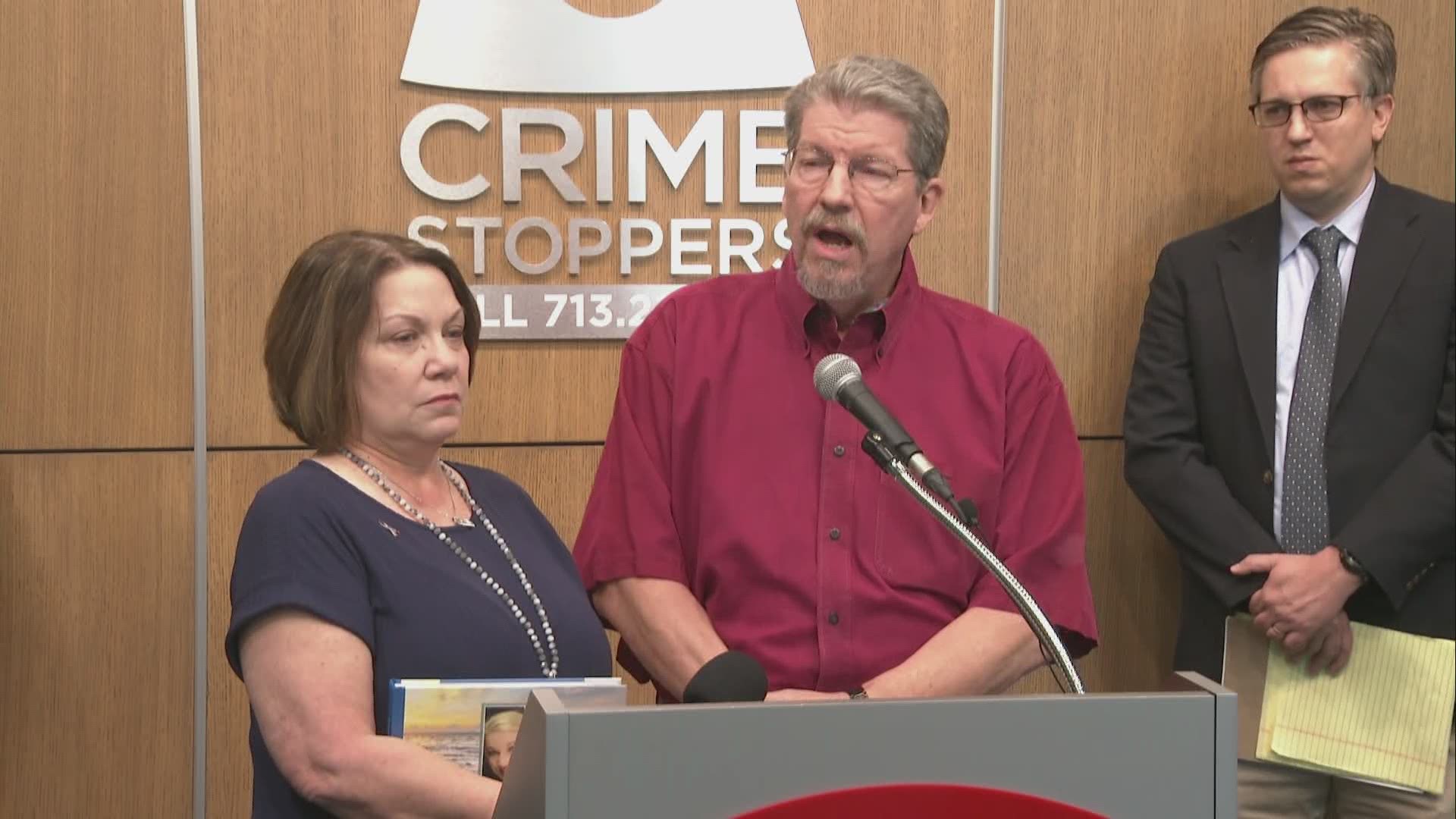 HOUSTON — The Houston-area man accused of killing his wife, bonding out of jail and later slipping off his monitoring device and disappearing is still on the run.

NOTE: The video in this story is a brief clip from a Friday news conference with the victim's family and Houston Crime Stoppers

Houston Crime Stoppers, the victim's parents and The Gulf Coast Regional Fugitive Task Force held a press conference on Friday to issue a new call for help the case, asking the public to call in any information they may have about Trent Paschal, 48.

It was Oct. 21, 2020, when La Marque Police say 30-year-old Savannah and her husband of eight years were arguing at their home. Eventually, Trent ambushed her and the victim’s mother, shooting and killing Savannah, according to police.

Now a reward is being offered for information that leads to his arrest.

He’s now accused of, while out of bond, stealing an SUV from a car salesman at knifepoint. He hasn’t been seen or heard from since April.

“We arrested him prior on the murder charge, and here we are again,” said Chase Hunt with the Galveston County Sheriff’s Office.

Hunt is also heading up the fugitive task force operation to find Paschal.

“We’ve followed up with every lead we have gotten to this point, and we need some more. We need some help from the public.  We ask y’all as a community, if we can come together. If you see something. If you know something, please reach out to us.”

Savanah’s parents Friday said the system has failed their family.

“All I can says is, this has been a nightmare for our family,” said father Michael Kinchen. “Our daughter Savanah, a beautiful intelligent vibrant young mother — and that was her favorite pastime, being a mother and raising her two children. She was working and going to school. She had finally found her niche in life, and she would have been finishing up her education and getting her final certifications this month.”

“I can only imagine what is going through the children’s mind.”

“We feel that the system has failed us,” said Kinchen. “Everybody has been working hard, doing what they can do. But the system itself, in my opinion needs to be revamped.”

The victim’s father said the suspect “writes his own rules.”

“We have had him in custody three separate times in the past six months since the murder of our daughter. And every time he has legally bonded out of the system.”

Also read: Man accused of killing his wife is located, shot by deputies

“They gave him his fair chance, put a monitor on him and said, ‘behave yourself, be a good boy’ and he has failed to do that. Now, he’s not wearing that monitor, and he’s on the lam. He’s running, and we don’t know where he is.”

After the killing last year, Paschal fled and was eventually found outside a Harris County Walmart. Investigators with the Harris County Sheriff’s Office said he refused to put down a pistol and was then was shot by deputies.

After being released from the hospital, Paschal was booked on charges of murder, aggravated assault with a deadly weapon and felon in possession of a weapon. However, he bonded out of jail.

Then in April 2021, deputies said Paschal slipped out of his GPS ankle monitor and went to USA Auto Brokers on North Shepherd Drive in Houston. During a test drive, deputies say Paschal pulled a knife on the car salesman and stole a black 2013 Chevy Tahoe SUV with black rims, chrome mirrors and chrome door handles.

A judge has since revoked Paschal’s bond, but he hasn’t been seen since.

Michael Kinchen and his wife Shirley, who was assaulted the day of the killing, are caring for their two grandchildren, who are ages 11 and 7.

Consider him armed and dangerous

Paschal is wanted for murder, unlawful possession of a firearm by a felon and aggravated assault with a deadly weapon in Galveston County. "He should be considered armed and dangerous," noted Crime Stoppers.

Anyone with information that could help investigators can call Houston Crime Stoppers at 713-222-TIPS.