Do Florida schools need to rethink how they teach Black history?

Here's why Black history matters for our future, what Florida is doing right, and how our schools can do better.
Author: Jenna Bourne (WTSP), Lauren Powell
Published: 11:55 AM EDT July 16, 2020

Florida goes further than a lot of states when it comes to Black history education, but some experts say it’s not enough.

If Dr. Bernadette Kelley could give Florida schools a letter grade on how they teach Black history, “It’d definitely be a D or an F.”

“African American students are suffering. They can’t be what they don’t see. So, if they see nothing but white males being prosperous and successful, then they are not going to see themselves like that,” said Dr. Kelley, principal investigator on the state Commissioner of Education’s African American History Task Force.

He represented Tampa in Florida’s legislature for a combined 18 years.

“I was blown away by the tremendous impact that African Americans had on the current life of everyday Floridians, especially our system of free public education, which was inspired and created by an African American by the name of Jonathan Gibbs,” said Hargrett. “Much of the history that I learned in school was whitewashed and sanitized, and bore no relationship to the actual facts that existed on the ground…History teaches us lessons of the past so we don’t make the same mistakes that were made in the past.”

In other words, you can’t understand systemic racism today if you don’t understand how racism has been woven through America’s history.

Florida has an oversight committee to help schools comply with that law, the Commissioner of Education’s African American History Task Force.

It’s made up of 12 Floridians, mostly people who work in school districts, at universities, and a couple of lawmakers.

Because of those two things alone -- the state law and task force -- Florida stands out in a good way from most other states. According to the National Council for the Social Studies in 2017, Florida is one of seven states to pass a law requiring Black history be taught in public schools and have a Black history oversight committee.

Florida has specific social studies standards that include Black history from elementary through high school. 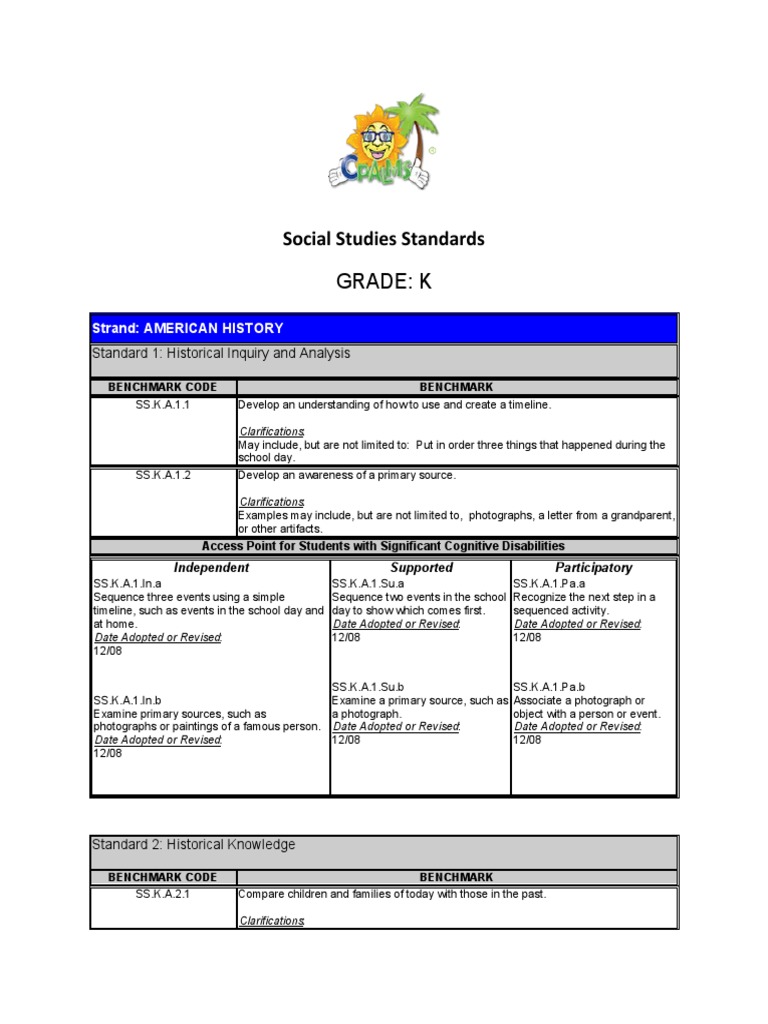 Florida Social Studies Standards and Access Points | Money | Disability
GRADE: K Standard 1: Historical Inquiry and Analysis SS.K.A.1.1 Develop an understanding of how to use and create a timeline. SS.K.A.2.1 Compare children and families of today with those in the past. Clarifications: Examples may include, but are not limited to, federal holidays and ethnic celebrations..

But those standards aren’t perfect.

While they mention slavery more than 100 times, they’ve been missing a pretty big moment in Florida Black history this whole time: The 1920 Ocoee Election Day Riots.

“It’s troubling. I didn’t hear of it and I grew up right next to Ocoee. It wasn’t until I moved to the city of Ocoee that I heard about the massacre,” said State Sen. Randolph Bracy, (D) Orlando – District 11.

On Election Day in 1920, after a Black man tried to exercise his legal right to vote, a white mob lynched an unknown number of Black people living in Ocoee and destroyed their homes.

According to the Orange County Regional History Center, it was the largest incident of voting-day violence in U.S. history.

A century later, the governor signed a bill last month that Sen. Bracy advocated for, requiring the massacre be taught in Florida schools.

“I think it charts a path on where we need to go and how we need to go forward,” said Bracy. “Florida has a dark history when it comes to racial violence against Black people. And I think it’s important that kids know that, so we never repeat our history.”

While Florida law requires students to learn about Black history, they’re not required to take any specific courses on Black history.

“Just having an African American history class as part of your curriculum can be really important for changing some of those views. I think it definitely was for me. And it made me a lot prouder of being an African American, and it allowed me to learn about my history for the very first time,” said Griggs.

It’s one thing to have a law requiring schools to teach Black history; it’s another thing to enforce it.

“I don’t think there’s a problem with the information itself or the curriculum,” said historian and former African American History Task Force member Dr. Anthony Dixon. “The problem is there’s no repercussions for not using it….We need to make some type of mandate. We need to ensure that they are teaching it and that, if they do not teach it, then there’s some repercussions thereof.”

Florida law gives each school district the final say on what instructional materials make it into the classroom.

On top of that, it’s ultimately teachers who decide how to present that material.

“You don’t want kids to feel embarrassed during the class or, you know, for someone to teach it the wrong way. Because that can also oftentimes happen when you have a teacher who’s disrespectful of African American culture and can make other African American kids feel uncomfortable,” said Griggs.

But we got a sign last month that teachers are stepping up on their own. Every year, the African American History Task Force hosts a Summer Institute to provide school districts training and tools to improve their Black history instruction.

The Summer Institute usually gets 25-40 participants.

Hill said it was the largest turnout they’ve ever had.

Now for a less exciting number: The Task Force has classified just nine of Florida’s 73 school districts as being “exemplary” in how they teach Black history.

Here in Tampa Bay, Hillsborough and Pinellas are on that list.

This year, for the first time -- 26 years after Florida passed its Black history education law – the state is coming a step closer to accountability for school districts. Districts now have to submit a report every year to the state education commissioner that describes how they taught required topics, including Black history.

Those reports must “include the specific courses in which instruction will be delivered for each grade level and a description of the materials and resources utilized to deliver instruction.”

Despite this new step, you heard Dr. Bernadette Kelley’s opinion at the beginning of this episode: She’d give Florida schools a D or an F.

“That’s right. This is the first year that there’s been some type of requirement,” said Kelley.

And 10 Investigates found, once again, noncompliance has no consequences.

The Florida Department of Education tells us 68 of the state’s 73 school districts and lab schools met the July 1 deadline to submit their reports.

We asked the state what happens to the districts who missed the deadline.

Department spokesperson Cheryl Etters said, “…we will work with any district missing the deadline to help them submit their required instruction reports.”

In other words, no penalties. No consequences.

And that could mean continuing a cycle where students are left in the dark.

RELATED: What are the origins of 'Defund the Police'?