Tampa Bay students prepare for March 14 walkout, say it won't be the last

Students across the state took a stand for more security and legislators agreed to a $400 million school security plan for more school resource officers, mental health resources, and changes to the purchase of assault weapons. 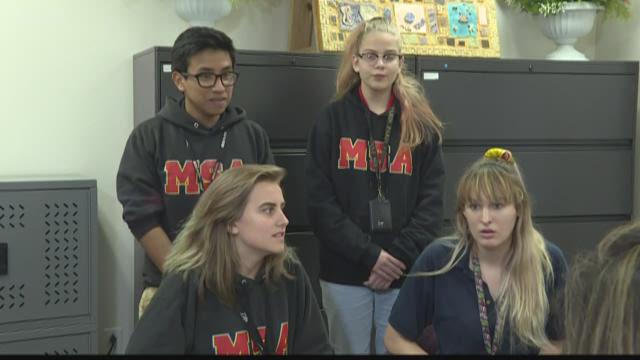 PALMETTO, Fla. -- Students across the bay area prepare for a 17-minute walkout on Wednesday, March 14.

The day marks 1 month since the Parkland school shooting when 17 people were shot and killed.

Students across the state took a stand for more security and legislators agreed to a $400 million school security plan for more school resource officers, mental health resources, and changes to the purchase of assault weapons.

Legislators raised the minimum age for buying an assault weapon to 21 and put in place a three-day waiting period.

We spoke with several students from Manatee School of the Arts in Palmetto about Wednesday’s walkout and what students have been able to accomplish.

Related: Will your child be disciplined if they participate in Walkout Wednesday?

Do you think a walkout on the one-month anniversary is essential?

“I think students have never really gotten a say, never gotten a voice before. We’ve finally stepped up and are doing something about it, that is important,” said Kaliska Wiley, a high school senior. She added, “When it’s not safe for kids to go to school… where is safe?"

“I hope they get the message we’re not teens glued to our phones and are not to be ignored. This is not a fad or trend disappear in a few months,” added Katherine Hughes, sophomore.

So you say legislators are doing something, is it enough?

“I don’t think enough is a word this scenario could cover,” answered Tess McGirr.

Tess would like more mental health resources. She said, “I’d like to see professional or someone with a degree in mental health.”

“Assault rifles need to be controlled now, we don’t have that,” said Kaliska.

All four students said they do not think teachers should be armed.

Kaliska said, “There’s more that can go wrong with that then can go right.”

Her mother is a teacher and already knows she would be a human shield to protect her students.

“A lot of shooters are students, maybe one of their students. You’re asking them to take out a student they cared about, it’s not fair to them.”

How do you feel about schools suspending students who take part in the walkout on Wednesday?

Tess said, “People, especially teenagers now have had enough, we’re not sitting down and shutting up just because you threaten me with a suspension. I’ll take the suspension you put over the officer on my campus.”

The students recognize their voices have been heard and they’re grateful for the changes legislators have made, but say more needs to be done.

Tess said, “We are striving for more. We’re not giving up.”