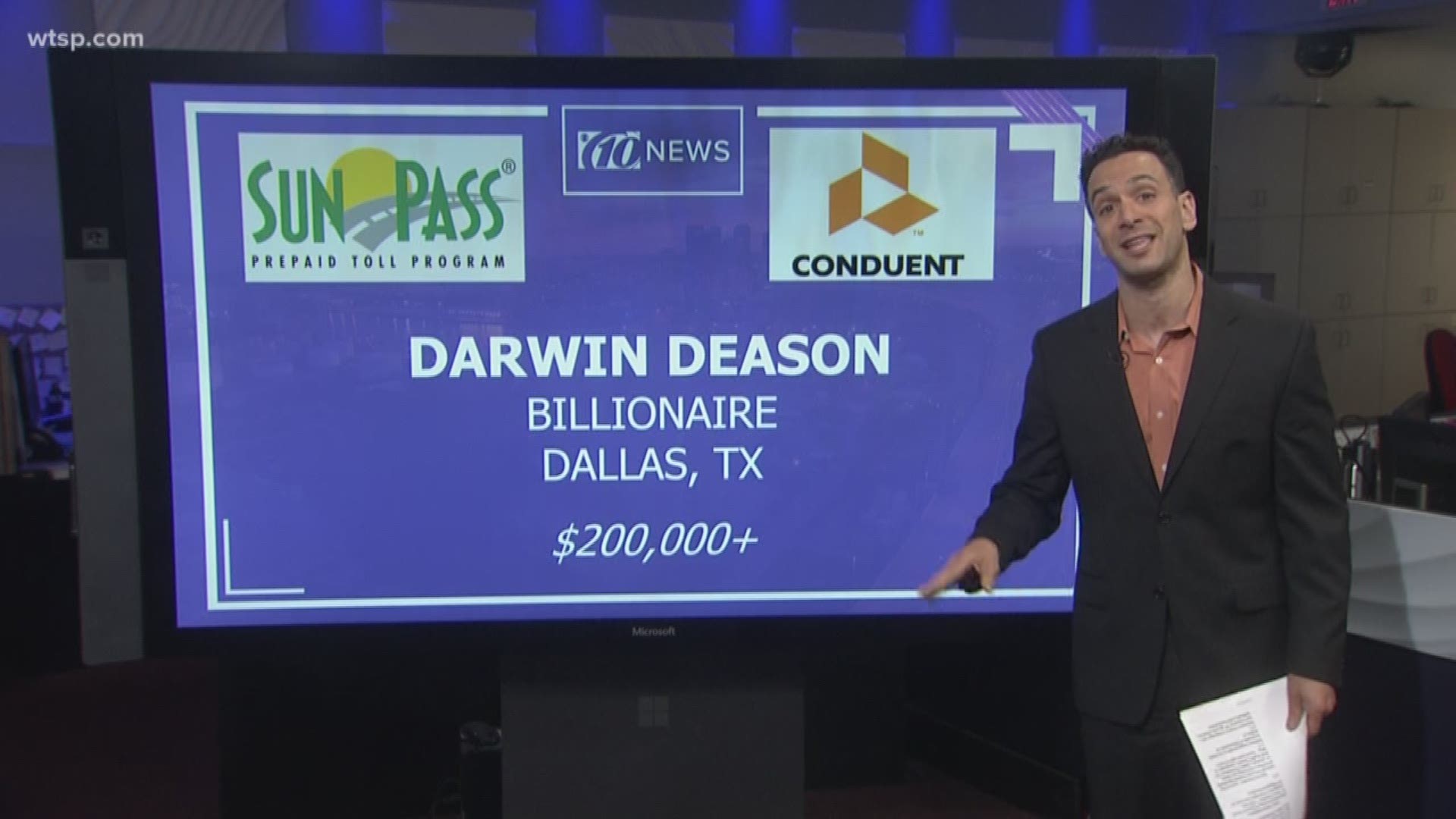 TAMPA BAY, Fla. – In the weeks leading up to Florida's SunPass system collapse -- time where the state should have recognized shortcomings in contractor Conduent's plan and pulled the plug on the failed upgrade -- Governor Rick Scott was collecting campaign checks at a Texas fundraiser co-hosted by Conduent's billionaire founder and investor Darwin Deason.

Weeks later, the state moved forward with its SunPass upgrades, which were supposed to take the system offline for just six days. But, internal failures caused massive outages for more than a month, creating billing, website, and customer service nightmares that are still plaguing Florida drivers 55 days later.

When 10Investigates first brought the issue to Gov. Scott in June, he had little to say outside of a statement that Conduent "will be held fully accountable." A month later, with problems still mounting, 10Investigates asked FDOT and the governor what penalties have been assessed to Conduent, but again, no specifics were offered.

Even though the state announced it was suspending payments on Conduent's $343 million contract, 10Investigates revealed FDOT was still paying the company on a number of other deals. The contract also grew significantly through a series of work orders after it was originally awarded as a $287 million deal in 2015.

10Investigates is reviewing Gov. Scott's extensive campaign filing to see how much he raised at his May 8 Dallas fundraiser, first reported by the Tampa Bay Times. But, with dozens of individuals on the host committee, including Deason's wife and his son, each able to donate $5,400, the fundraiser likely raised in excess of $200,000.

Scott also reported receiving $97,000 in bundled contributions last quarter by lobbyist and friend Brian Ballard, who 10Investigates revealed three weeks ago was getting paid by Conduent to influence both the Florida legislature and executive branch, which includes the governor’s office and FDOT.

Deason, 78, founded and grew data company Affiliated Computer Services, an S&P 500 company that was acquired by Xerox in 2010. At one time, Deason was reportedly the largest individual shareholder at Xerox. When Xerox spun off its data business in 2017 into a new company, Conduent, Deason received hundreds of millions of dollars in Conduent stock.

According to 2018 SEC filings, Deason owns $230 million in Conduent stock.

Requests for comment to Conduent have gone ignored. A Wednesday message to the Deason family has not yet been returned.

A spokesperson for Scott's Senate campaign sent in a statement Wednesday, "Every decision the Governor makes is in the best interest of Floridians. Any assertation otherwise is completely false."

The lawmakers called upon Governor Scott to investigate FDOT and suspend tolls for Florida drivers while the state tries to sort out its massive toll backlog and internal account problems. After 10Investigates pressed the state for more than a month for numbers detailing the backlog, FDOT announced for the first time Wednesday it has 170 million transactions yet to be processed.

Some leaders have also called on the governor to pull Conduent's performance bond, which could compensate Florida for financial losses due to company negligence. But. pulling the bond would also have a significant adverse impact on Conduent's bottom-line.

If you are a Florida driver with concerns or problems related to SunPass disruptions, contact 10Investigates’ Noah Pransky confidentially at npransky@wtsp.com. Or join the ongoing SunPass conversation on his Facebook page. And let him know who you think should be held accountable.