Employees return from Christmas break to find store cleared out, boss not answering

"This is basically what I walked into and I was like oh, wow." Monica Capen said. "Obviously there's no indication he’s coming back." 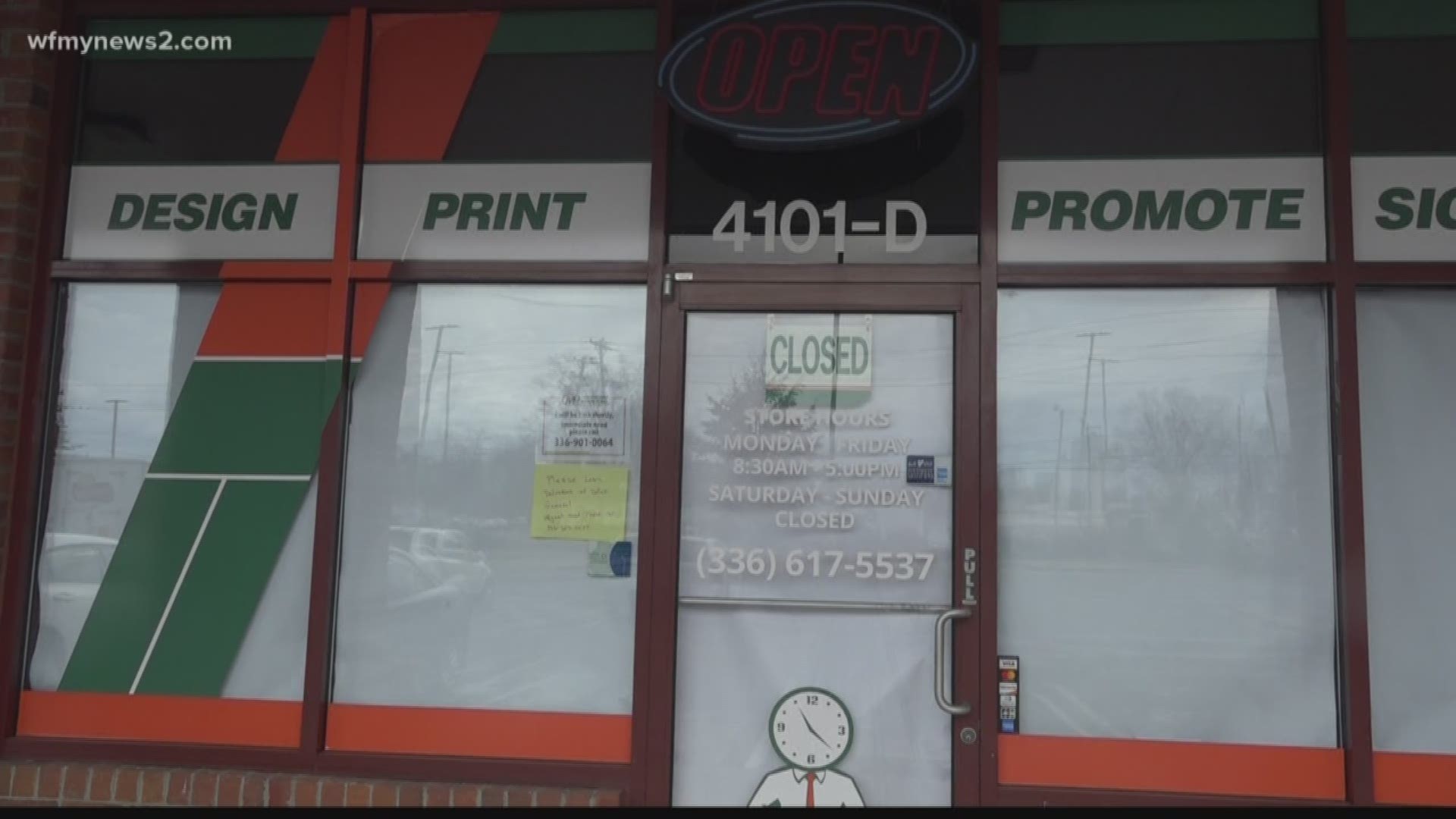 GREENSBORO, N.C. — Employees at International Minute Press in Greensboro were excited to return to work after Christmas break. But instead, got the shock of a lifetime.

"It's one of those things, your heart just drops," employee Monica Capen said.

Capen said when she left work on Friday the 20th, nothing was out of the ordinary. She said her boss told her to have a good week. But then she says he stopped answering when she asked about the work schedule following the holidays.

Then no answer, to anything.

Capen said she had a bad feeling, so she checked the International Minute Press' Burlington Road location on Friday the 27th.

White paper covered the storefront windows. There was a sign that said 'I will be back shortly,' but Capen said, that sign is almost always there.

So her gut feeling was right.

Capen has keys to the store. When she unlocked the door, Capen found the store completely cleared out.

What was left? Wrappers, hanging wires, crumbs, trash, and scraps of paper.

"This is basically what I walked into and I was like oh, wow." Capen said. "Obviously there's no indication he’s coming back, there’s no way he would be coming back for anything in here."

Capen said she deserves an explanation from her boss. She is also owed her last paycheck of around $800 dollars.

"He’s just going to close up like that? And leave somebody on Christmas no doubt!" Capen exclaimed. "The holidays, you know, it gets tough and people are spending money on kids and I have a grandson and you’re expecting that paycheck to come in."

But she says she's not the only person affected by this abrupt and unexplained closure.

"It's not just hurting me, it’s hurting customers."

Capen explained that a local church is one of the customers that will be negatively affected.

"{The church} does this thing for the children, and they had us printing and laminating things and the church paid us up until April, so yeah."

WFMY News 2 has reached out to the several numbers provided by the owner of this International Minute Press franchise, Keith Jump. The calls have gone unanswered.

There is no indication of the store's closure from the outside. Again, there is a sign on the door saying 'we'll be back shortly.' But all signs point to no return from the inside.

"You’re left with questions and no answers, so it's hard."

We reached out to the Better Business Bureau for answers. Can a person just up and leave their business, leaving employees in the dust, with no consequences?

The Better Business Bureau (BBB) said there is no law against it. A business can be open one day and closed the next.

The BBB says the board can take action against an accredited business. But International Minute Press on Burlington Road is not accredited.

Employees of this International Minute Press location are encouraged to contact the Department of Labor, and could potentially take their case to small claims court.

WFMY News 2 also reached out to the International Minute Press franchisor, for more insight on the Burlington Road location.

"To be a snake and a thief in the night? That’s pretty bad," Capen stressed.
"I want to make sure no one else has to go through what I’m going through."

90-year-old Greensboro woman finally back in her own home, more than a year after the 2018 tornado

Greensboro woman starts the New Year off right with $100,000 win