A new report published in October found a recreational hockey game back in June led to 15 people testing positive for the virus. 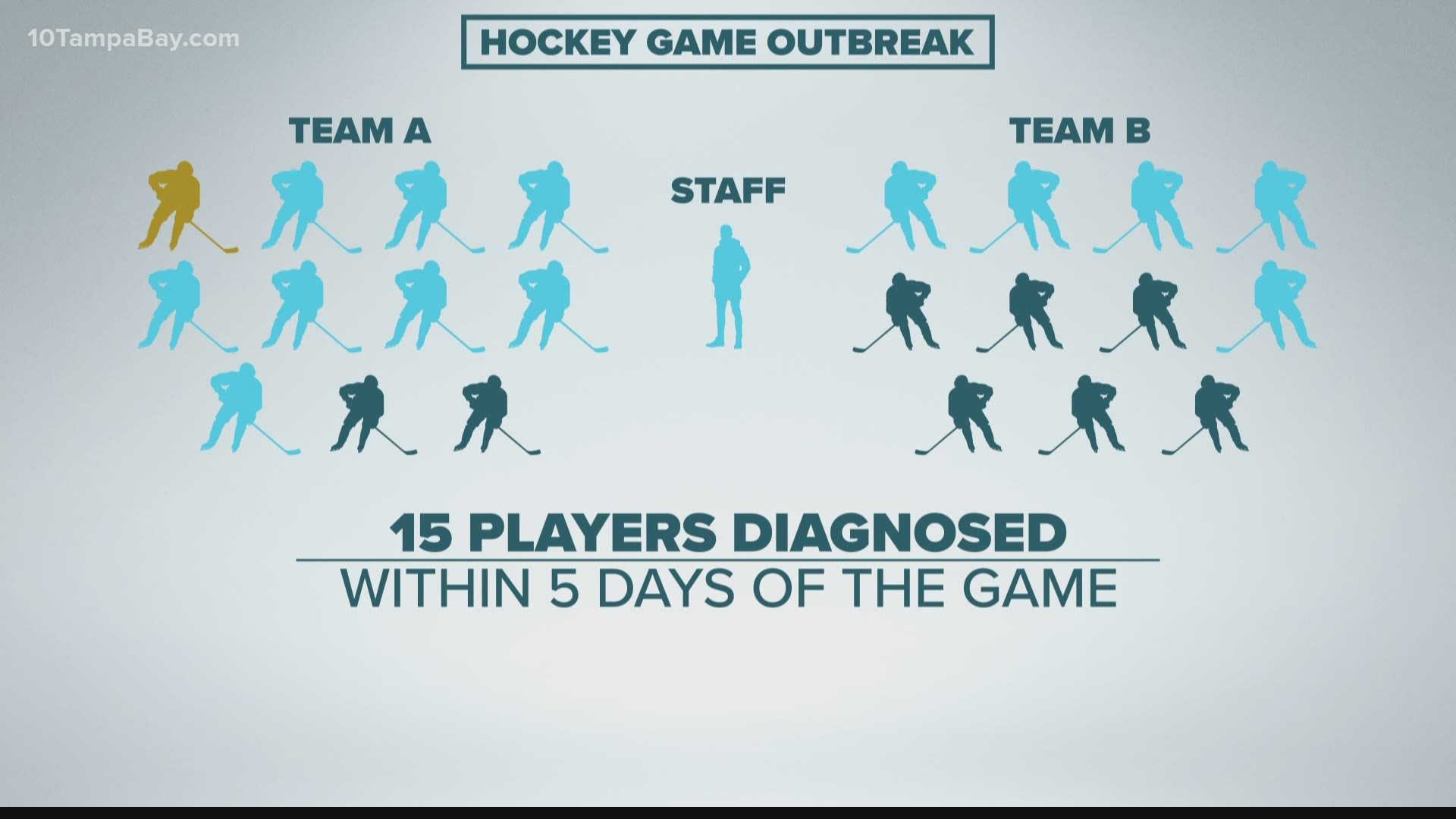 TAMPA, Fla. — During the pandemic, people have been looking for some ways to blow off some steam, but health experts have been warning exercising inside has risks.

A new report released in October by the Centers for Disease Control found a coronavirus outbreak here in the Tampa Bay area was linked to a recreational hockey game that happened earlier this year. And, the game is now being used as a CDC example of how easily the virus can spread.

Back in June, two teams, each with 11 guys, took the ice. Altogether, 15 people were diagnosed with the virus within five days of the game. The Department of Health traced the investigation through one man on Team A who was pre-symptomatic. Eight other players on his team tested positive. Then, on the opposing team, five players were diagnosed. A staff member for the ice rink also tested positive, but none of the referees on the ice experienced symptoms.

When it comes down to how the virus was transmitted, there were a couple of culprits at play. DOH investigators say while some guys were wearing face protection to keep them from getting hit by a puck, no one wore cloth masks in the locker rooms or during the game. So, they were essentially maskless, for the hour-long game and about 20 minutes before and after as well. Health investigators believe the game was well-suited to pass the virus around since it's inside, the guys were in close contact with each other and didn't have any other common exposures before the game. This game only had one person in the stands and not as many players as others.

Credit: CDC
A Florida Department of Health investigation followed how the players were infected with COVID-19.

"The indoor space and close contact between players during a hockey game increase infection risk for players and create potential for a superspreader event, especially with ongoing community COVID-19 transmission," the CDC explained. "Superspreader events, in which one infectious person infects many others, can lead to explosive growth at the beginning of an outbreak and facilitate sustained transmission later in an outbreak."

This is why the NHL played the rest of their 2019-2020 season in a bubble, limiting players' interaction outside the game. Out of more than 33,174 tests of team personnel, there were zero positive tests according to the NHL. The Lightning were in the bubble 65 days before bringing the Stanley Cup home to Tampa. And the only way fans could watch was on TV. No one was allowed inside the arena.

Credit: TEGNA
Here's a look at how much time NHL players were in the bubble while playing games in Canada to finish out the 2019-2020 season.