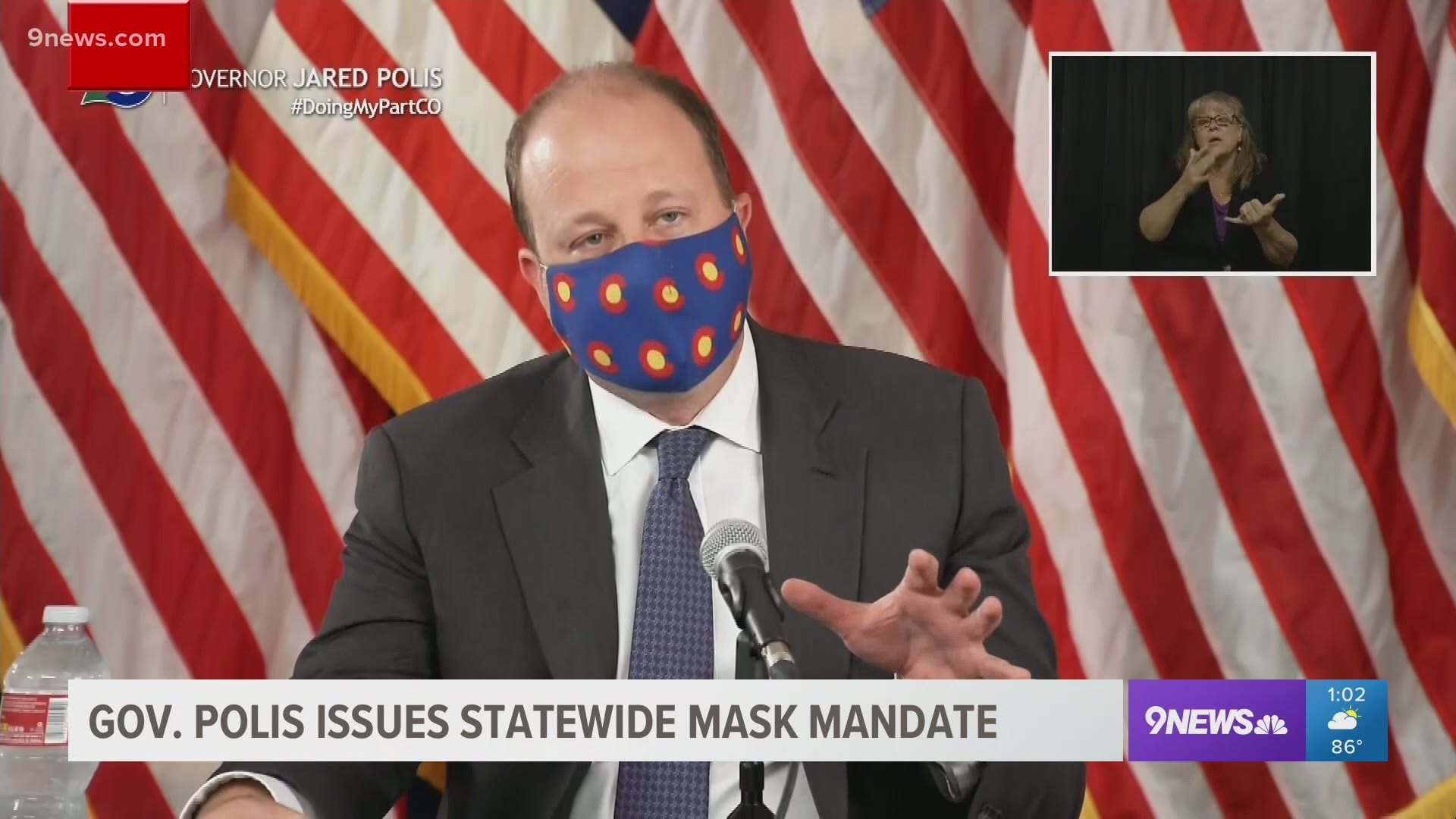 “We have a choice in Colorado: either more mask wearing and more attention to social distancing, or more damage to our economy and loss of life,” Polis said.

He made the announcement during a news conference on Thursday alongside State Epidemiologist Dr. Rachel Herlihy, Denver Mayor Michael Hancock and Aurora Mayor Mike Coffman, a Republican who had advocated that the Tri-County Health Department issue its mask order last week. 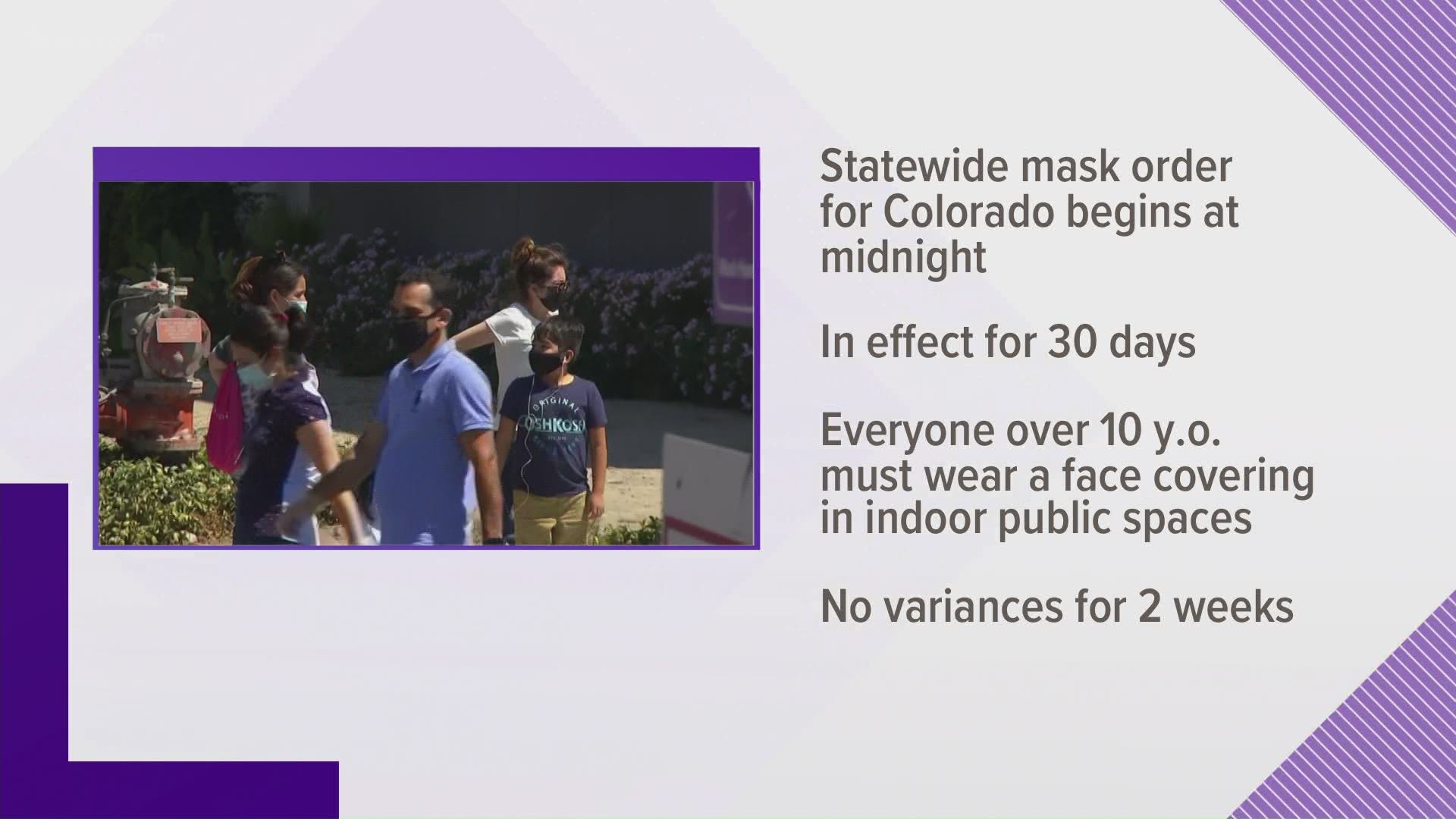 The new order applies to anyone over the age of 10. People who have medical issues or disabilities that preclude them from wearing masks are exempt from the mandate, which will last for 30 days.

As recently as Tuesday, Polis had said he was reticent to issue a statewide mask order, arguing that it would be difficult to enforce. Two days later, he said he changed his mind because of data that indicated the patchwork of largely Democratic counties in Colorado that enacted their own face covering orders saw a 15% increase in mask usage.

“As I have said throughout the crisis, we’re going to take appropriate action where we have to so we can continue to have Colorado as a positive outlier,” Polis said.

Failing to wear a mask inside a Colorado business will now be considered trespassing, the governor said. Businesses could lose their licenses for not enforcing the mask mandate.

Due to technical difficulties, 9NEWS lost part of the news conference. Watch the full version from the governor's Facebook page below:

Here are the cases where the governor's office said masks can be removed in indoor public places:

"The Governor is on a power trip and IMO his mask mandate is a clear violation of our civil liberties," Neville tweeted. "I’ve retained counsel with the intent to sue. Stay tuned..."

The Governor is on a power trip and IMO his mask mandate is a clear violation of our civil liberties. I’ve retained counsel with the intent to sue. Stay tuned...#copolitics

Following last week’s Tri-County mask mandate, numerous municipalities in its borders – including Douglas County and Brighton – announced they intended to opt out. Under the statewide order, Polis said this will not be possible.

“You need that reasonable level of safety no matter where you live,” he said. “No. 2, it affects the public health situation in our state, and three, clarity of message. People should not be inspecting a map to see where it’s safe to go to the store.”

READ THE FULL MASK ORDER BELOW.

Also due to the uptick in cases, Polis said he is suspending granting variances to counties that exempt them from parts of statewide health orders. Denver announced Wednesday that it would not seek additional variances due to the increases in COVID-19 cases within city limits.

Counties that have experienced an increase in novel coronavirus activity must present a plan to mitigate the virus’ spread in order to keep existing variances, Polis announced.

Polis said these efforts are meant to prevent the state from going into another stay-at-home order.

“The goal of what we’re announcing today is to hopefully prevent the health situation today from deteriorating to the point where it hurts our economy more,” Polis said.

During the news conference, Herlihy said part of the state’s uptick in cases could be attributed to visitors from COVID-19 hotspots like Florida, Arizona and Texas.

Polis stopped short of saying he would issue a statewide quarantine order like neighboring New Mexico, instead arguing that the mask order would hopefully prevent tourists from adding to the state’s novel coronavirus cases.

“We need to educate tourists to make sure they are subject to this when they are in their state,” Polis said.

The governor acknowledged the growing political movement against mask wearing, and said he was hopeful the mandate wouldn’t last forever and that it will be lifted if there is a cure or vaccine.

“I can’t wait until this is all over and we have a big bonfire with all these masks and we all hug each other and get together,” Polis said.

RELATED: Here are the Colorado cities, counties that have issued face mask orders