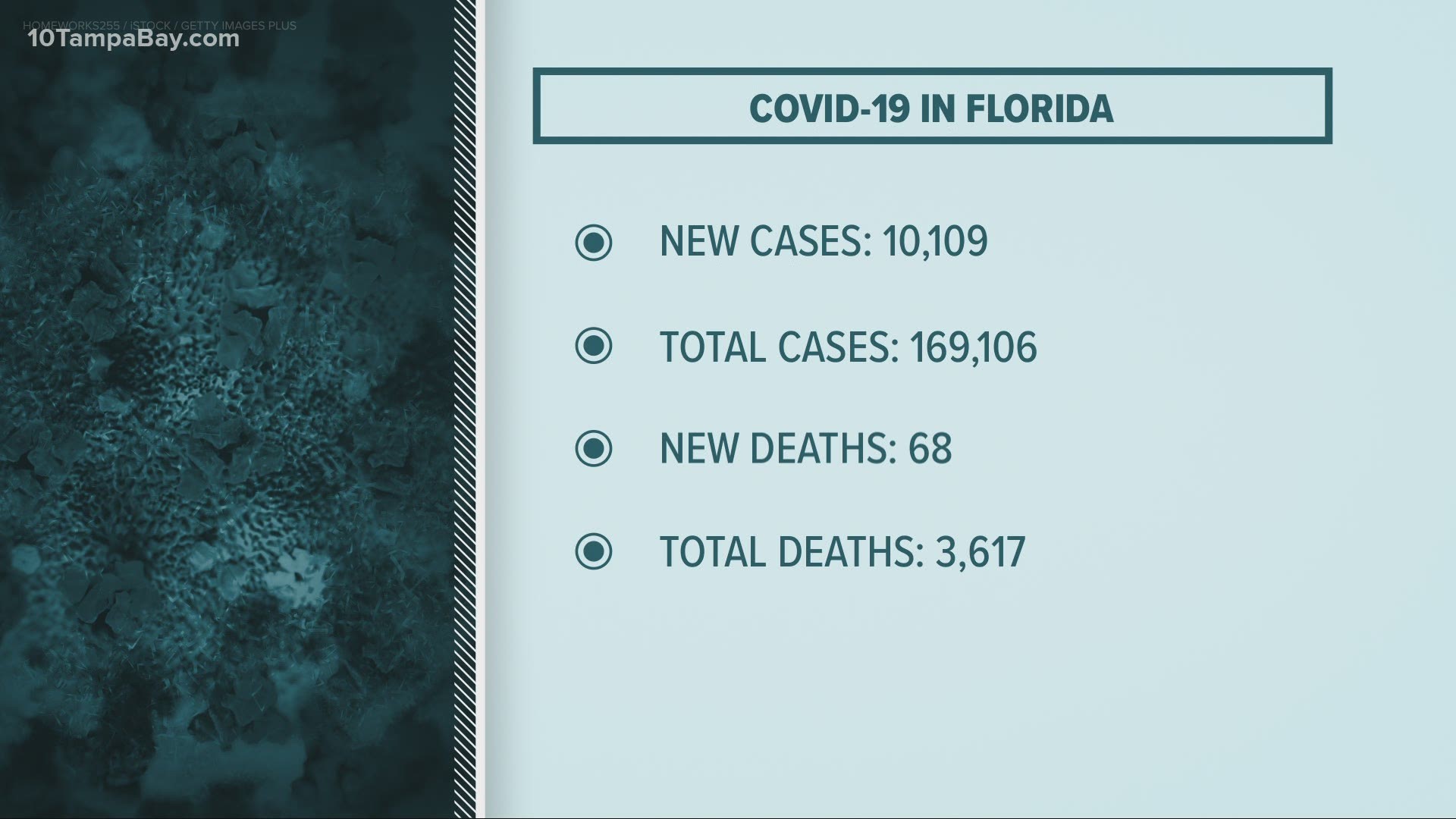 Thursday's report from the Florida Department of Health showed the state added another 10,109 new cases of COVID-19 for July 1.

That number is now the highest record for new coronavirus cases in Florida in a single day, beating June 27's record of 9,585.

Wednesday marked the ninth straight day where the number of newly reported coronavirus cases was more than 5,000. It's also the first time the state's report was higher than 10,000.

The health department said 68,821 test results were turned in Wednesday with a percent positive rate of 14.59 percent.

Though health experts have repeatedly said that a 5 percent positivity rate or lower is recommended to begin reopening, Florida has seen almost a week of percentages of more than double that.

And, the latest daily report is nearly triple that amount. The state has been in Phase Two of reopening for nearly a month.

RELATED: Vice President Pence to meet with Gov. DeSantis on Thursday in Tampa

RELATED: Where can I get tested for COVID-19 in Tampa Bay?

Gov. Ron DeSantis has reiterated in recent weeks that he doesn't plan to make any changes to the state's reopening plan or enact a statewide face mask mandate. Any face mask mandates are being left up to local leaders, DeSantis said.

"Doing things outdoors in Florida is less risky than indoors. The virus does not like sunshine, heat and humidity," DeSantis said, noting he's seen very few outbreaks of COVID-19 reported from "something like a park or a beach."

The CDC said it remains unknown whether weather and temperature affect the spread of COVID-19. The World Health Organization said exposing yourself to the sun or to temperatures higher than 77 degrees does not prevent or cure the virus.

During a news conference in Juno Beach on Tuesday, DeSantis echoed his previous statements pointing to increased testing and jumps in the number of younger people testing positive for the weeks of spikes in new cases.

DeSantis was also asked about his feelings on Texas Gov. Greg Abbott's decision to pause reopening and recommendations for residents to stay home. Florida's governor said his recommendations have been similar when it comes to social distancing.

"If I had one message to give the folk, I would say, protect the vulnerable," DeSantis said. "That's the number one mission we have."

If you're not in those groups considered vulnerable -- people 65 and up and those with health conditions -- DeSantis said to "understand this is an asymptomatic illness for a lot of young people."

DeSantis again said the state is "not going back closing things."