Monday saw a slight decrease in test results turned in, but the positivity rate rose to 14.57 percent. 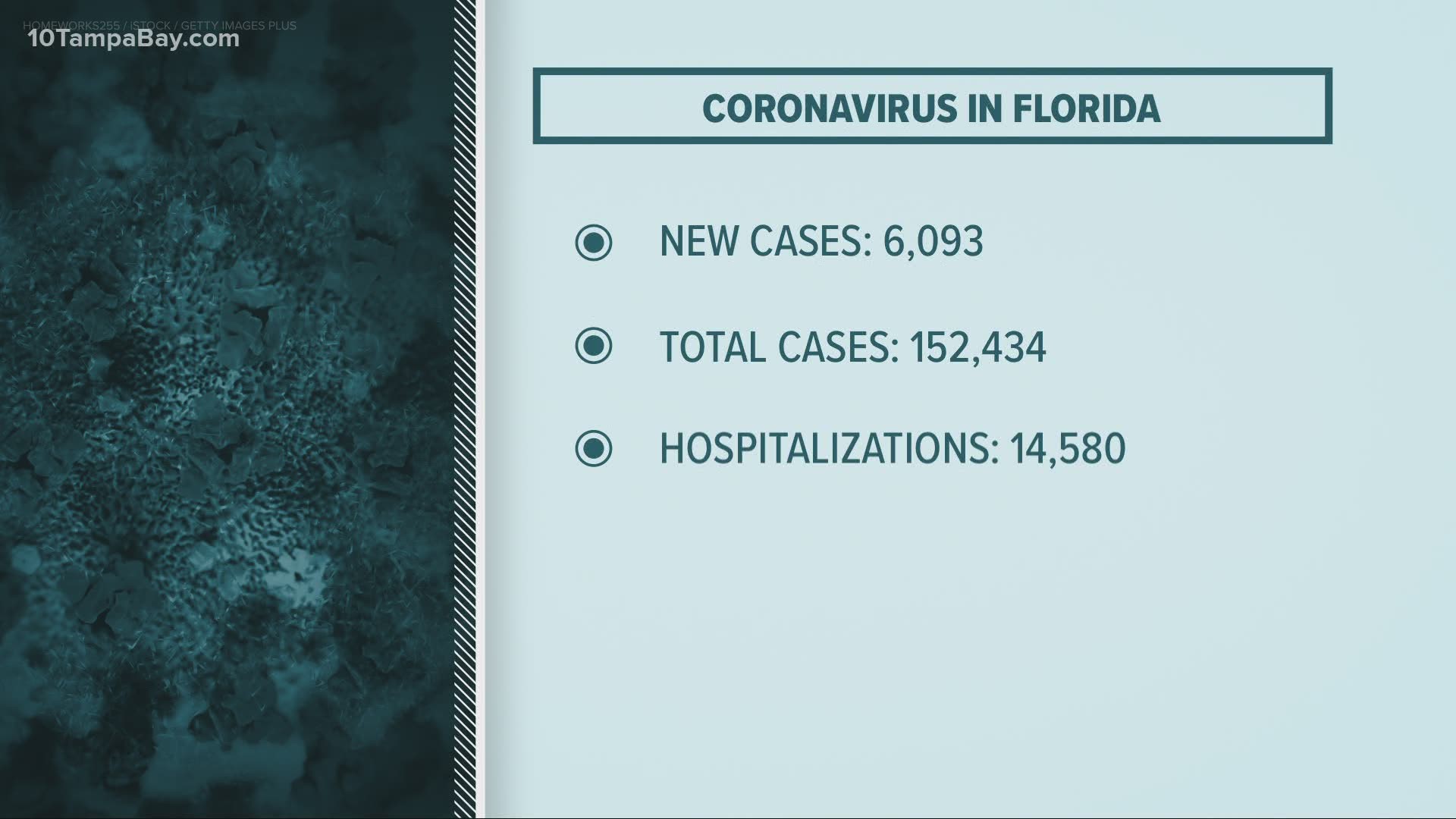 Editor's Note: The state health report was delayed on Tuesday. An earlier version of this story calculated the percent positivity rate based on the available data at roughly 17 percent. The updated information that has since been released by the state contained more test results than the county-by-county breakdown indicated. As a result, we have revised the percent positive rate down to just under 15 percent instead of 17 percent. The updated story is below.

New data from the Florida Department of Health was released on Tuesday, and it showed the state reported another 6,093 new cases of COVID-19 for June 29.

The state confirmed 58 more Florida residents had died of coronavirus, as of Monday.

The new report from the health department is an increase from the previous day's report of 5,266 new cases.

On Monday, 43,446 test results were turned in, which is a slight increase from Sunday, which saw 41,626 tests turned in.

Of all the lab test results submitted to the state on Monday 14.57 percent were positive.

RELATED: Coronavirus in Florida: State reports another 5,266 cases and a drop in testing

Health experts have repeatedly said that a 5 percent positivity rate or lower is recommended to begin reopening. Florida has seen several days of more than double that percentage. And, the latest daily report is more than triple that amount. The state has been in Phase Two of reopening since June 5.

Hospitalizations have decreased slightly from 14,651 on Monday to 14,580 in the last day.

In the Tampa Bay area, 13.32 percent of adult ICU beds were available in Hillsborough County, and 14.6 percent were open in Pinellas.

Only 12 percent of pediatric ICU beds are available in Pinellas County, while more than 51 percent are free in Hillsborough.

Amid weeks of climbing new cases numbers in Florida, Gov. Ron DeSantis has reiterated that there are no major policy changes coming to the state's reopening plan, nor is he going to enact a statewide face mask mandate.

On Monday, the city of Sarasota joined St. Petersburg, Tampa, Pinellas County and Hillsborough County in passing an order requiring people to wear face coverings in public spaces. The orders are similar across the cities and counties, but some have broader exceptions for children of certain ages.

RELATED: Tampa Bay mask mandates: Who has them, what they mean

A new model done by the Institute for Health Metrics and Evaluation predicts a widespread face mask mandate in Florida could cut the predicted number of deaths from COVID-19 in half by the fall. The IHME model from the University of Washington said nearly 8,000 lives could be saved through consistent, widespread mask-wearing in public.

And, after nearly four months of fighting the coronavirus, experts say testing sites around Florida are falling behind. Doctors at USF say ideally hundreds of thousands more people should be tested per day to get an accurate picture of where the virus is in the state.

Counties, including those in Tampa Bay, are concerned they're not testing enough and supplies and staffing will run thin.

“I think all these places having so many positive cases so quickly, we got back in the same situation that we saw earlier on in the spring, which is where we're running out of testing supplies,” Dr. Jill Roberts with the University of South Florida Public Health said.