Gov. Ron DeSantis says the declaration allows him to establish a better command structure to react to the virus. 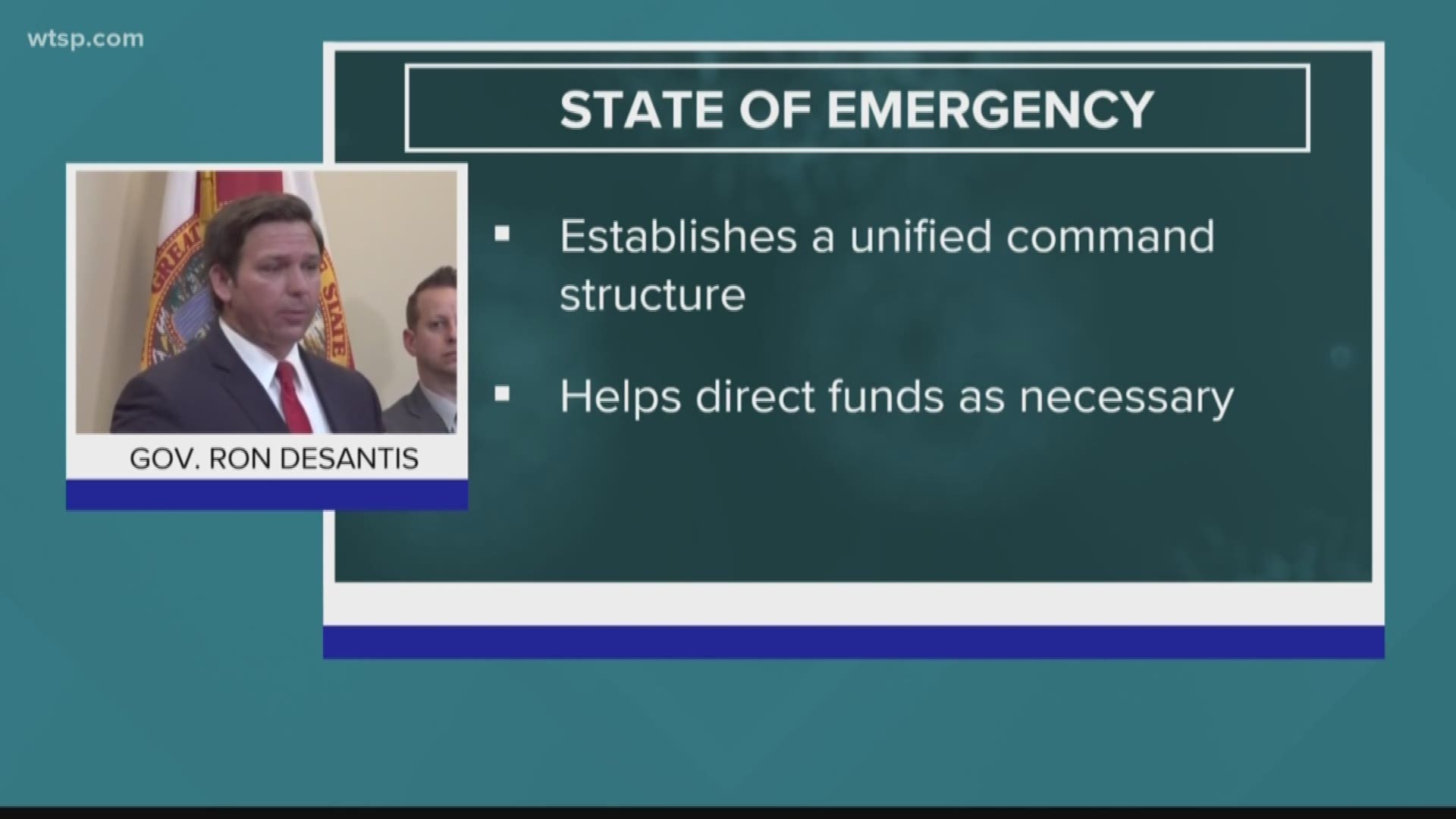 TALLAHASSEE, Fla. — Facing a growing public health crisis, Florida Gov. Ron Desantis declared a state of emergency Monday to better marshal resources and get outside help against a new strain of coronavirus that has killed two people in his state.

In announcing the move, the governor again appealed for calm.

At a news conference Monday afternoon at the state Capitol, the governor urged Floridians to take common-sense precautions and stressed that normally healthy individuals remain at low risk of contracting the virus. He specifically cautioned the elderly and those with underlying health conditions not to go on cruise ships and long-haul flights, and to avoid large gatherings.

DeSantis said the emergency declaration allows for what he called a unified command structure to limit the spread of the virus, and to allow the state to more effectively mobilize resources.

“It also allows — if need be — out-of-state medical personnel to operate in Florida," he said. "It allows us to more swiftly purchase any necessary supplies, including masks and materials and equipment necessary to set up field hospitals.”

The governor's announcement capped a day of quickly shifting developments.

Earlier Monday, the Florida House abruptly recessed and cleared public galleries after several of its members agreed to be tested for the new strain of coronavirus after recently attending conferences in Washington, D.C., where other attendees tested positive for COVID-19.

The unplanned recess was meant to “set an example in the ongoing fight against COVID-19, and in an abundance of caution,” said House Speaker Jose Oliva.

The five members were escorted out of the chamber by Rep. Cary Pigman, a medical doctor who serves in the House.

The public gallery overlooking the chamber floor also was evacuated as a small crew dressed in blue medical gowns swabbed down desks in the chamber. The recess halted legislative business in the House and Senate for more than an hour.

All five legislators were later allowed to return and legislative business continued.

As the day wore on, that seemed like an understatement.

The confusion began much when Florida health officials walked back an earlier advisory requesting all travelers returning from foreign countries self-isolate, further sowing confusion over its efforts to contain a fast-spreading threat to public health.

A statement from the Florida Health Department had earlier advised all individuals traveling internationally to self-isolate for 14 days.

Two hours later, health officials revised its advisory to realign with federal health guidelines that require travelers returning from the high-risk countries — China, South Korea, Italy and Iran — to remain home and avoid contact with others.

It was unclear what led to the communications breakdown, when the Health Department took the unprecedented step Monday of asking all travelers to self-isolate for 14 days after returning from any foreign travel. A spokesman did not immediately return phone calls.

Florida's governor acknowledged the misstep during his news conference.

Two people have already died in Florida out of 18 Florida residents that state health officials say tested positive for the virus now spreading across the United States and other parts of the world.

For most people, the new coronavirus causes only mild or moderate symptoms, such as fever and cough. For some, especially older adults and people with existing health problems, it can cause more severe illness.

The vast majority recover from the new virus. According to the World Health Organization, people with mild illness recover in about two weeks, while those with more severe illness may take three to six weeks to recover.

Health officials across the country were quickly trying to contain the spread of the virus. In Florida, worries rose over how panic could play out in a state that is a destination for millions of visitors from overseas. Already, there is concern about how the virus could affect amusement parks such as Disney World in Orlando, one of the country's most visited attractions. Cruise lines are also already being impacted.

Florida health officials say anyone who has a fever, shortness of breath and other symptoms of respiratory illness within 14 days of traveling to some of the most affected areas, such as China, Italy, Iran, South Korea and Japan, should inform their doctor and local health department. The same advisory applies to people who have been in close contact with anyone showing symptoms who recently traveled to severely impacted countries.

People who are asked to self-quarantine should remain home. Health officials say they should not go to work or school or at any other gatherings until 14 days after returning from foreign travel. If any symptoms develop, they should alert a doctor and health officials.