COVID-19 in the classroom: Why state data is hard to come by 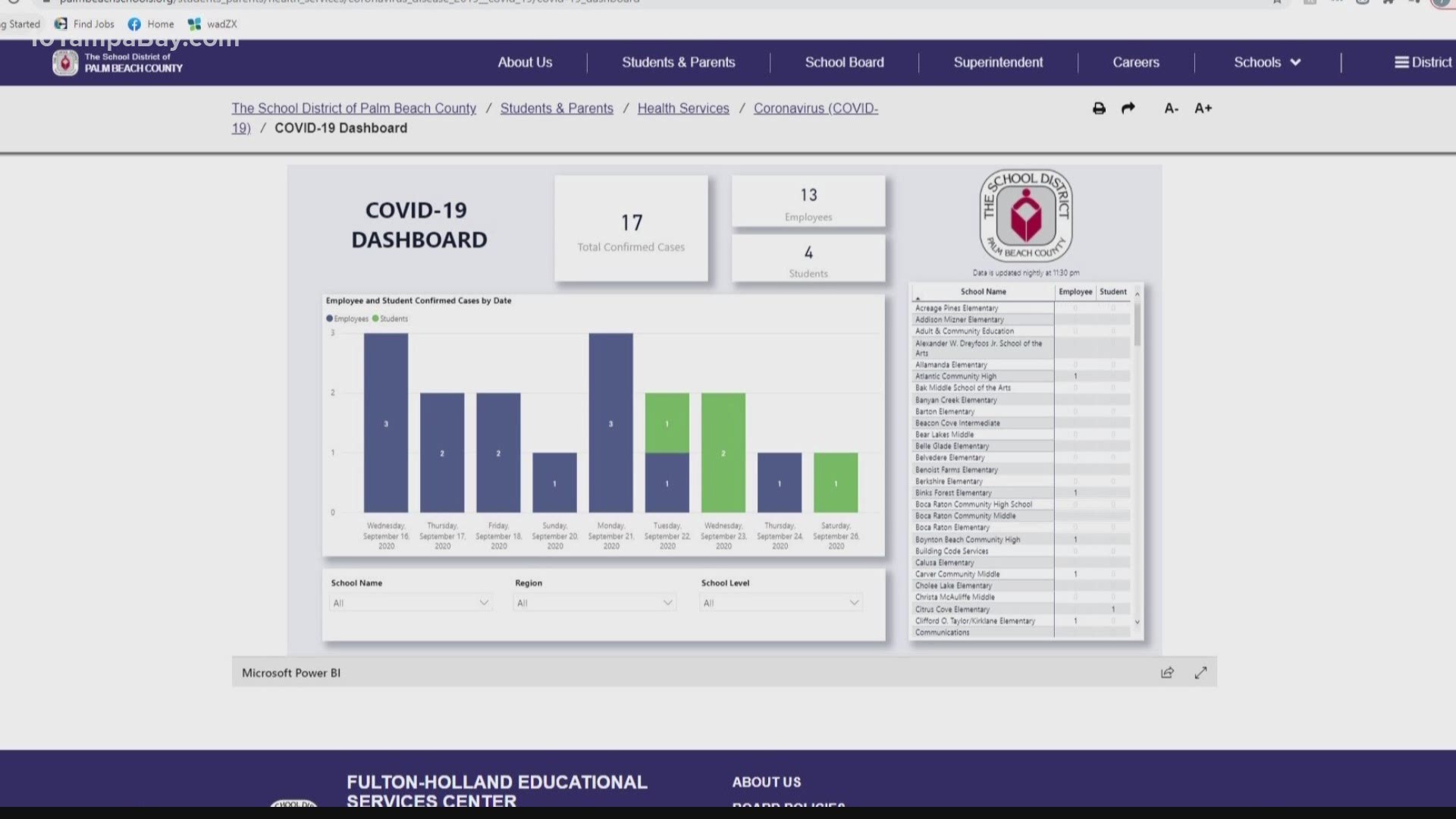 TAMPA, Fla — In the Bay area alone, we know there have been dozens of positive cases among students and staff since schools opened a month ago.

We know that because of the dashboards school districts have created to track cases. But what does the statewide picture look like? It’s something we still don’t know yet.

"I have a first grader and a two and half-year-old," Andrea Nadler said.

Her daughter, Avery, is a first grader and is logging on from home. Even without her daughter being inside a physical classroom, she still has concerns and is paying attention to what is going on at Avery’s school when it comes to COVID cases.

Like many school districts, Palm Beach County, where Avery goes to school, has created a COVID-19 dashboard alerting parents about positive cases.

"There was a case from two local high schools not showing up," Nadler said.

She says she questions the accuracy. For now, district dashboards are the best thing for parents to pay attention to.

The state has yet to release data associated with schools. We know they have it after it was accidentally released a month ago and 10 Investigates was sent a copy. That data was taken down.

What we have right now is the daily overall report released by the Department of Health. That data shows positive cases by age groups. The category most closely associated with school-aged kids would be the 5 to 14-year olds.

If you take the total number from the weekend before school started and compare it to where we are today, there are 5,123 cases -- that's a 22-percent increase.

But if you go back from July 24 through that weekend before school, there was a 63-percent increase in cases of kids 5 to 14 years old.

“We don't really have the greatest numbers here. But we're not seeing huge community increases. And that's good, looks to be like there's more of a problem with the college-age kids,” Dr. Jill Roberts with USF's School of Public Health explained about the 15-24-year-old age group.

That age group showed us an increase of 44 percent the weekend before school started until now.

“We were worried that the schools were going to become a really big epicenter of spreads. And that still could happen," Roberts said. So, I do want to caution, we don't want to let down our guard, because that's so good caution. So far, we haven't seen that.

"So, the data is not really that complete right now."

Roberts and Nadler both agree that they would like to see a more detailed report by the state so everyone knows what is going on in the classroom.

“My core concern would be knowing what’s going on in my backyard," Nadler said.

10 Investigates reached out once again to the Department of Health asking for the report and they continue to tell us it is not ready to be published.

You can see the latest COVID information from the Florida Department of Health here.