Earlier this year, infectious disease expert Dr. Anthony Fauci warned of the delay between when some people become gravely ill and when they pass away. 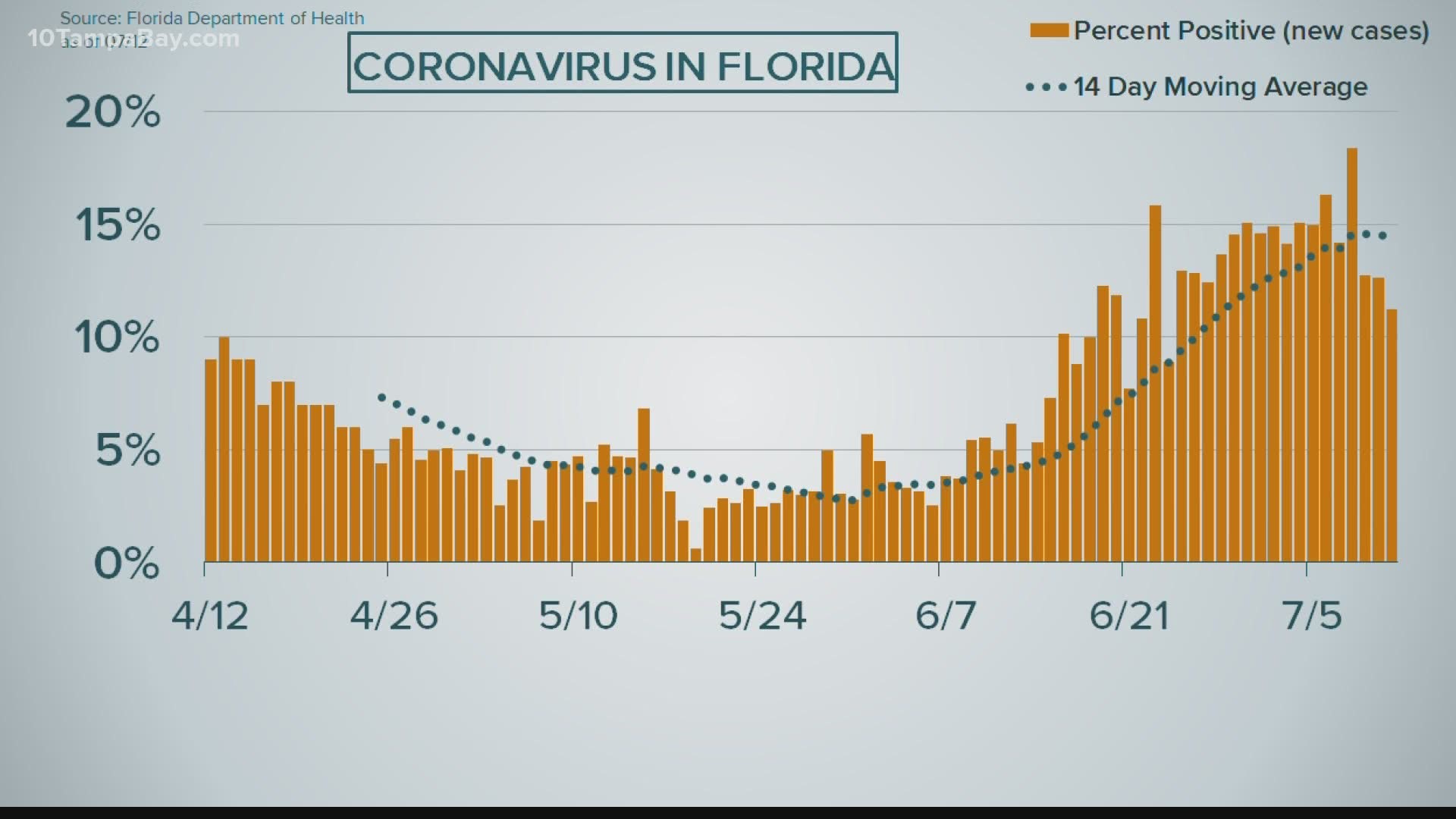 ST. PETERSBURG, Fla. — If there may be one thing that has remained constant about COVID-19, it appears to be this ominous pattern: More cases lead to additional hospitalizations, which can lead to a greater number of deaths.

Florida in recent weeks has reported record-breaking spikes of COVID-19 cases, and there have been instances of hospitals at or nearing capacity. But what about deaths?

It appears the pattern is playing out right now, once again, as the number of cases reaches new levels.

Florida's 14-day moving average notched a high of 51 deaths among residents and non-residents in early May as COVID-19 gripped the state, according to the Department of Health data. When the number of daily reported COVID-19 cases plateaued around that time, so too did the number of reported deaths.

But the number of cases increased again, and a new high of 53 new deaths was recorded from the agency's July 10 report, which climbed by 58 more deaths on July 11 and again rose with 59 additional deaths confirmed on July 12.

Recent daily spikes in reported deaths, including 120 deaths logged in a single day on July 8, are contributing to the overall increase in the 14-day moving average.

Many people have questioned the death data. Social media posts have circulated suggesting the 120 deaths recorded in the July 8 update had mostly occurred in June not July. The claims were based on a "date" column that exists in the Florida Department of Health’s report. That column, however, lists the date people tested positive – not the date they died, which is often several days later.

A chart on the state’s dashboard, however, does show deaths by "date of death." Even if you take that chart, instead of the date the death was recorded in the state’s total (as we do), a general upward trend is still visible in early July.

"There are more cases. There are more hospitalizations in some of those places and soon you’ll be seeing more deaths," said Dr. Anthony Fauci, director of the National Institute of Allergy and Infectious Diseases and a member of the White House Coronavirus Task Force, speaking with CNBC in late June.

Between each event, there is a bit of a lag. When a person contracts COVID-19, it can take several days to weeks before the virus is able to take hold and symptoms occur.

While doctors know more about the virus now than they did when the pandemic began, experts still expect additional hospitalizations to be followed by more deaths because there is no known cure for the virus or widespread therapeutic available.

RELATED: 'It’s like walking back into the fire': Florida nurses who aided NYC say as they look to aid their hometown

RELATED: ‘We’re the epicenter’: Epidemiologists say action to slow the spread of COVID-19 in Florida needs to be taken now

The state has seen relatively stable death numbers over the course of several weeks, which largely has been attributed to the lower median age of people getting infected with COVID-19. Gov. Ron DeSantis asserted the younger population has been more apt to handle the virus. As of Sunday, the median age was 38.

In the Florida Department of Health's latest report, recent deaths in Tampa Bay included a 92-year-old man in Hernando County and a 75-year-old woman in Hillsborough County.

Dr. Jay Wolfson with USF Public Health estimated in mid-June there would be between 6,000-18,000 new COVID-19 by the second week of July, and instead, that has been ongoing roughly since the end of June.

In reaction to the increasing cases, DeSantis ordered the suspension of alcohol consumption at bars and announced 1,000 medical personnel are en route to the state to assist hospitals. He has, so far, resisted calls for a statewide mask mandate while masks and social distancing continue to be recommended as ways to limit the virus' spread.

Given the delay from cases, to hospitalizations to deaths, only time will tell whether the efforts by Florida leaders and the public to limit the virus' spread are successful.

"If you look at Florida for the last 60, 90 days, the death rate has come down. It’s plateaued," Wolfson said. "We’re doing better than Arizona for example. Better than Texas. Only because we came out of our insulation a couple of weeks later after we put the cap on it.

"But I think we’re going to catch up if we’re not careful."