Data that was not validated was put on the portal. 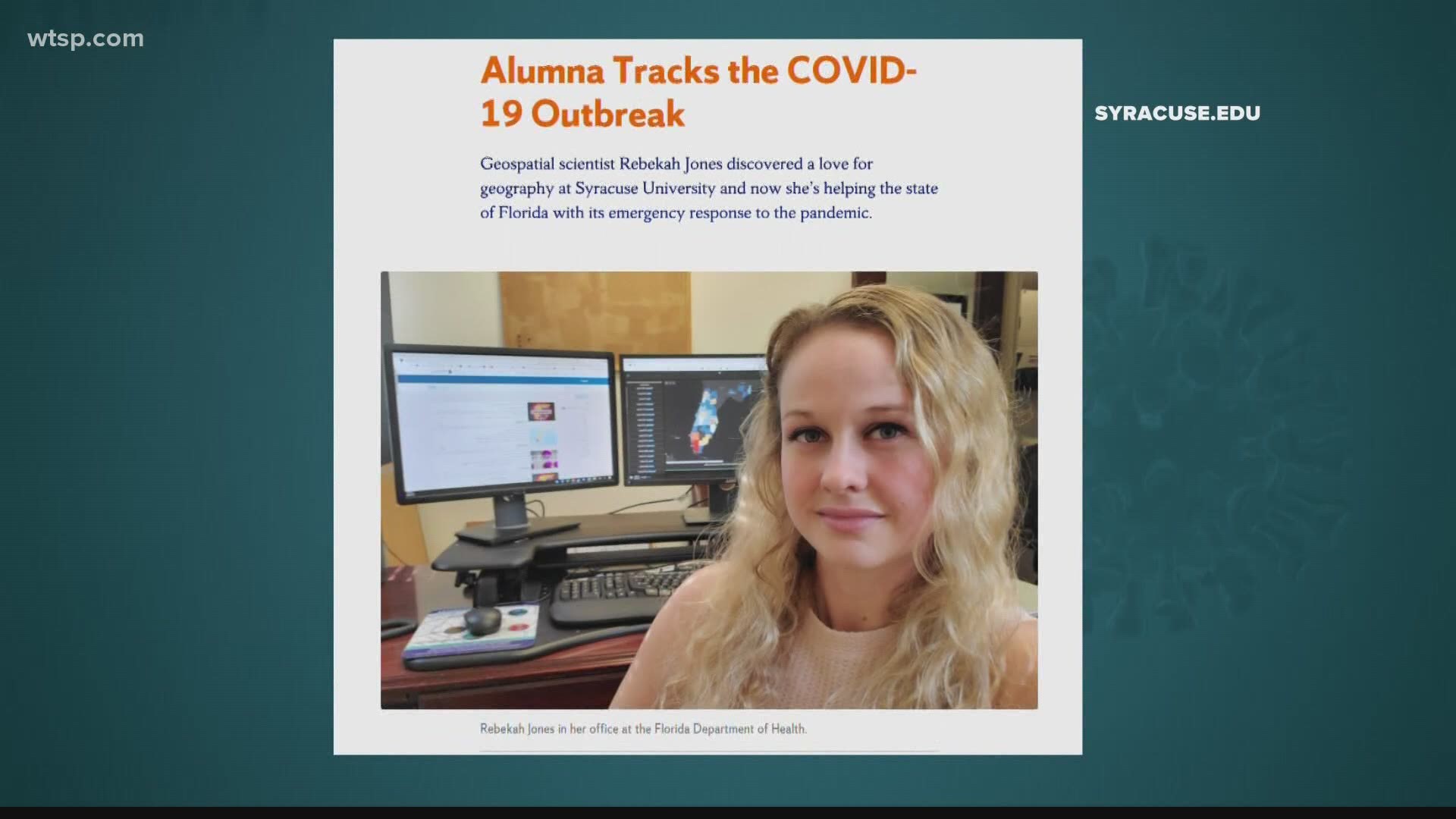 ST. PETERSBURG, Fla. — There are still many questions on the data being shared by the state related to the coronavirus. Lawmakers are seeking investigations and media organizations like ours are working to find clarity for you.

The state’s COVID-19 dashboard is where many of you log on and check to see coronavirus cases in your neighborhood. It has information like how many deaths there have been, how many cases; and you expect it to be right. Well, the woman who designed this service, Rebekah Jones, was asked to resign and she says it was at least partly because she pushed for transparency. Now lawmakers are asking for in investigation into her claims because of the importance of the accuracy of that information.

On April 29, Gov. Ron DeSantis said he was going to continue to apply a data-driven approach to the problems that are before us. He praised the numbers as to why he decided it was time to re-open the state. That data can be found here on the dashboard. It’s something many Floridians use to monitor the situation.

But in a May 15 email, Rebekah Jones, who designed that program, wrote to a group whom she regularly sent coronavirus data:

“For reasons beyond my division’s control, as of late in the day on May 5, my office is no longer managing the COVID-19 Dashboard. I am no longer involved in the publication of data, fixing errors, answering questions, etc., in any shape or form," she wrote.

She went on to say that her commitment to accessibility and transparency were among the reasons she’s no longer running it. Days later, she was asked to resign -- or be fired -- from her management position at the Department of Health.

RELATED: DeSantis: It's a 'non-issue' that woman who designed Florida's coronavirus dashboard was ousted

Agricultural Commissioner Nikki Fried is just one of many leaders on the state and federal level asking for an investigation into why Jones was removed from her position.

“It’s important to get to bottom of it because we need accurate information and that’s really what’s the heart at all of this,” said Fried.

Florida's coronavirus case data helps people make decisions about their own safety, including if they're ready to head to the beach or eat at restaurants.

Commissioner Fried insists the data being released by the state must be accurate. She says it’s crucial and really a matter of life and death.

“Our number one economic driver is tourism," she said. "If we aren’t giving out correct information and there’s something going on in the state of Florida people won’t come back here. It’s so important we get this right and we get this information out.”

On Thursday, Gov. DeSantis spoke more about the removal of Jones from her position. He says she was "not the chief architect of the web portal."

“What she was doing was putting data on our portal that the scientists didn’t believe was valid data. She didn’t listen to her supervisors. She had many people of her in the change of command. She was dismissed because of that," he said.

By the Governor’s own comments right there, we now know the data in the dashboard has been incorrect. So, when was it inaccurate, for how long and is it fixed yet? These are all questions we’re asking and why transparency is key.

Now, Commissioner Fried has asked for members of the Department of Health to come forward at next Thursday's cabinet meeting so it can ask them questions about Rebekah Jones. They can choose not to appear because the Health Department is solely under the purview of the governor. State Senator Javier Rodriguez sent a letter asking for the inspector general to look into the matter. That’s also an agency that reports to the governor.

We have reached out numerous times to Rebekah Jones. She has not returned our emails or phone calls. The state has sent a statement regarding why Jones was let go, citing insubordination:

"Rebekah Jones’ duties were to display data obtained by the Department’s epidemiological staff. The team that created the graphics on the dashboard, which was made up by multiple people, received data that was provided by subject matter experts, including Senior Epidemiologists, Surveillance Epidemiologists, and a Senior Database Analyst.

"Rebekah Jones exhibited a repeated course of insubordination during her time with the Department, including her unilateral decisions to modify the Department’s COVID-19 dashboard without input or approval from the epidemiological team or her supervisors. The blatant disrespect for the professionals who were working around the clock to provide the important information for the COVID-19 website was harmful to the team.

"Accuracy and transparency are always indispensable, especially during an unprecedented public health emergency such as COVID-19.  Having someone disruptive cannot be tolerated during this public pandemic, which led the Department to determine that it was best to terminate her employment."

And late Wednesday, spokeswoman Helen Aguirre Ferre provided further comment about Jones. 10Investigates specifically asked about the governor's comments about Jones allegedly putting in inaccurate data, such as what type of data was inaccurate, but the governor's office did not provide direct answers:

"Rebeka Jones acted as if she had ownership of the Department of Health Dashboard website and disregarded the direction given to her by subject matter experts such as the Senior Epidemiologists, Senior Data Analysts and supervisors. She was resistant to publishing data on the website she disagreed with going against the judgement of the epidemiologists, senior data analysts and supervisors.

"Event Date is a field that can be queried on the dashboard that marks the beginning of the epidemiological investigation which is based on self-reporting of information that is not medically certified. The science and public health experts believe the best information is the actual clinical diagnosis of the disease verified by COVID-19 diagnostic testing."