'Shame on you:' Gov. Ron DeSantis speaks on COVID-19 as man tries to shout him down 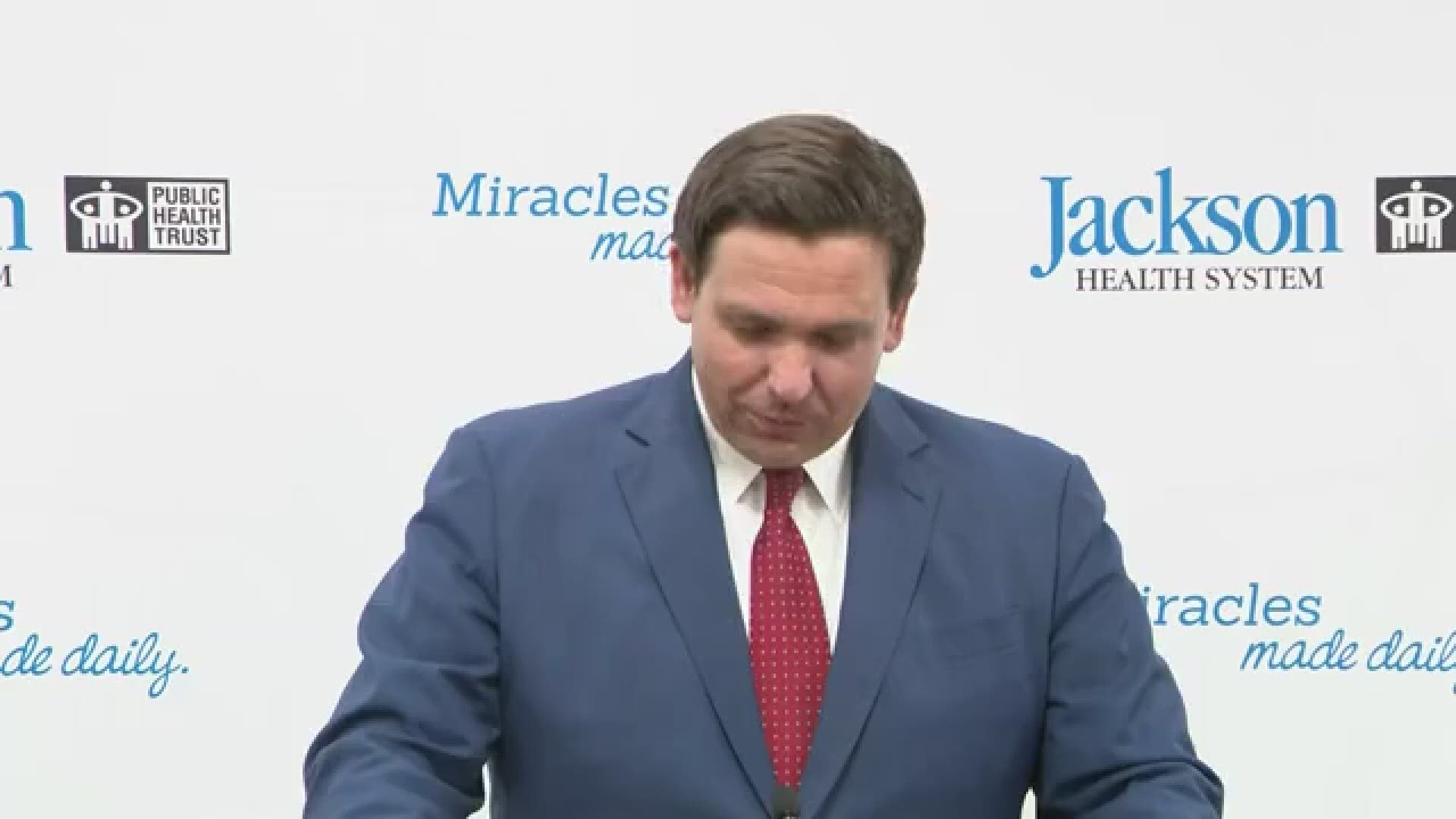 MIAMI — As Florida Gov. Ron DeSantis began his COVID-19 update, an unidentified man shouted over the governor as he tried to talk.

In the minutes afterward, Thomas Kennedy tweeted a video, claiming to be the one who interrupted the news briefing at Jackson Memorial Hospital, Diagnostic and Treatment Center in Miami. It showed him pointing to DeSantis and Miami-Dade County Mayor Carlos A. Giménez, both Republicans, criticizing their response to COVID-19.

Kennedy's profile shows he is the Florida state coordinator of United We Dream, a nonprofit that advocates for changes in immigration policy.

"You are doing nothing. You are falsifying information and you are misleading the public. Over 4,000 people have died, and you (pointing to Giménez) are blaming the protestors," Kennedy yelled. "You guys have no plans, and you're doing nothing.

As Kennedy was ushed out of the room, he called upon DeSantis to resign.

I just interrupted a press conference in Miami-Dade to let governor @RonDeSantisFL and @MayorGimenez know they are an embarrassment to FL and that their incompetence and lack of planning has resulted in the current public health crisis.

4,381 people have died so far in FL pic.twitter.com/q6SozHfT8o

The state in May was criticized over its COVID-19 data dashboard after Rebekah Jones, who designed the program, was removed from running it and alleged the new team would not "continue the same level of accessibility and transparency that I made central to the process."

DeSantis at the time called her removal a "non-issue," while the state asserted Jones "exhibited a repeated course of insubordination during her time" at the Florida Department of Health. It, too, pledged "accuracy and transparency."

His briefing came after a day the Department of Health reported 15,300 new cases of the virus among residents and non-residents -- the largest single-day record the U.S. has seen, surpassing New York.

The agency on Monday reported an additional 12,624 COVID-19 cases, and another 35 people have died from the virus. Florida's percent positivity for new cases was noted at 11.51 percent, a slight increase from the day prior.

DeSantis attributed the increased caseload with additional testing, with more than 140,000 tests reported two days ago and another 112,000 tests on Sunday.

The governor also announced Florida is seeing its first shipments of remdesivir arrive and be distributed to hospitals statewide. It has shown promising signs as a treatment option for people with the virus.

In reaction to the increasing cases, DeSantis in recent weeks ordered the suspension of alcohol consumption at bars and announced 1,000 medical personnel are en route to the state to assist hospitals. DeSantis has laid the blame for the rising number of cases on the state's younger population as the state has seen the median age of cases fall into the mid-30s to low-40s.

He, too, previously attributed spikes in COVID-19 cases to aggressive testing within high-risk populations, such as nursing homes, prisons and agricultural communities.

DeSantis has resisted calls for a statewide mask mandate while masks and social distancing continue to be recommended as ways to limit the virus' spread.

"Listen and follow the guidelines" put out by local health officials, DeSantis said. There have been no announced plans to roll back the state's reopening plan, which has been in Phase Two since June 5.

As COVID-19 cases spike in California, its governor on Monday announced indoor dining will cease -- effective immediately. Additional indoor business operations, such as wineries, movie theaters and others will also close.

Like California, Florida has seen a disturbing pattern emerge, something that medical experts -- including leading infectious disease expert Dr. Anthony Fauci -- have warned about: More cases leads to additional hospitalizations, which can lead to a greater number of deaths.