During a Monday news conference, the governor talked about Hillsborough County during the pandemic, state and local testing and ventilator needs in Florida. 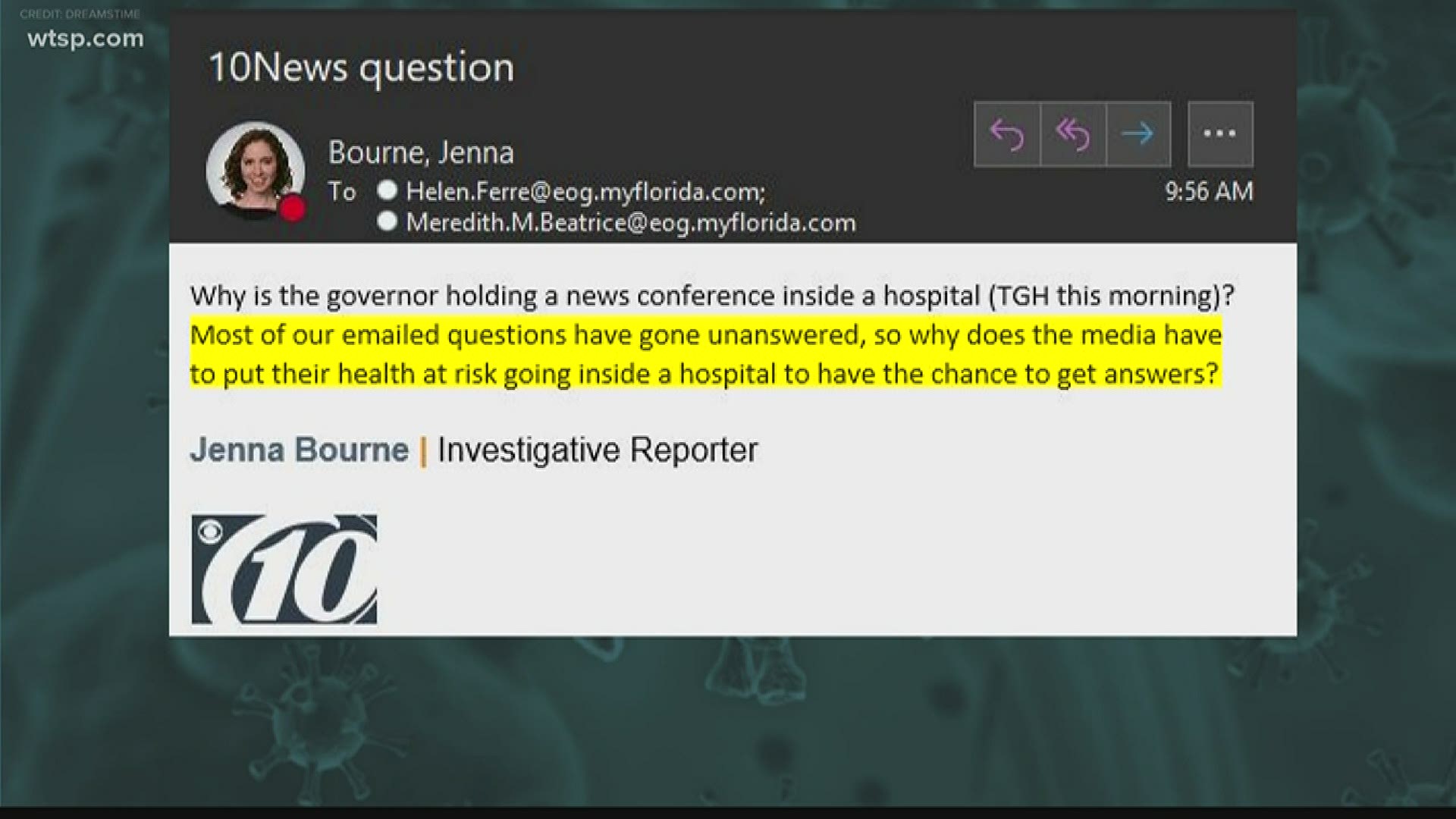 TAMPA, Fla. — Out of all the counties in the state -- and possibly the country -- Gov. Ron DeSantis said Hillsborough County is one of the top performers when it comes to its coronavirus pandemic response.

DeSantis visited the Tampa Bay area on Monday for a roundtable discussion with leaders at Tampa General Hospital. During the meeting, he talked up Hillsborough County, gave new numbers for state and local testing and ventilators in Florida and again addressed concerns about the slow reopening of the state.

Overall, DeSantis said Hillsborough is trending in the right direction when it comes to countywide response to the pandemic. As of last night, DeSantis said only 35 people in the county were hospitalized with COVID-19.

And, at Tampa General Hospital, he said 57 patients have been admitted so far during the pandemic. Fifty-two of those have recovered at TGH.

RELATED: Re-Open Florida Task Force wants to hear from you

RELATED: Hillsborough has flattened the COVID-19 curve, but local economy not yet ready to reopen

“Even though we’re not seeing the surge and the peak that some anticipated we would see. We will have a state of readiness and remain ready to take care of any patients that come in," TGH President and CEO John Couris said.

Regardless of symptoms, the hospital said it has tested and will continue to test all patients who come into the hospital for coronavirus.

“When they’re testing every single expectant mother, every single person coming in for surgery, you really wouldn’t need to do that unless they had symptoms if you didn’t want to," DeSantis said. "But, they’re (TGH) being proactive, ensuring it’s a safe environment, making sure their workers are protected.”

TGH said it's been collaborating with AdventHealth and BayCare, not just on tests but also for sharing data on COVID-19.

"People are getting great care by people like you see at Tampa General," DeSantis said.

Talking about the statewide response, DeSantis said there are only about 400 people on ventilators as of Sunday. That means, he said, that 6,408 are still available and ready to use for those who need help breathing.

The governor also said there are little under 2,200 hospitalizations across the state, noting capacity has not yet been an issue in hospitals. As for testing, he said the Department of Health reported about 357,000 tests done so far.

“If you go back two months and someone said – by the last week in April – there would be only 35 people hospitalized in Hillsborough County from COVID-19, people would’ve said you were nuts," DeSantis said. "They would’ve said hospitals would be packed with patients, and they’d be stressed, the system would’ve been breaking down. The fact that that didn’t happen, the fact that we have the capacity, the fact that we’re able to test and we see the positivity rates declining – that’s a good thing.”

"So, this is uncharted territory. We use the data, the facts as best as we can," DeSantis said. "But the fact is nobody knows what this will do or that will do. So, you go slow, you measure, you go steady and then you make the best decisions that you can.”

DeSantis was also asked about the state's unemployment system, whose website was down from Friday through early this morning for maintenance. The state unemployment claims website has garnered much criticism in the last month after users claimed it was crashing and glitching.

Outside of health concerns, DeSantis said his "number one concern" is getting checks out to people who need them.

As of April 25, the Department of Economic Opportunity has received 1,891,530 applications for unemployment benefits. Only about 210,000 claims have been paid.

“Before I was governor, the state paid $77 million for this thing. There are a lot architectural problems with it, no question about it, totally not worth $77 million," DeSantis said. "At the same time, you know, I’ve talked with these engineers and you would not build the system in mind with the idea that the economy would basically stop voluntarily...there would be a capacity issue no matter what.”