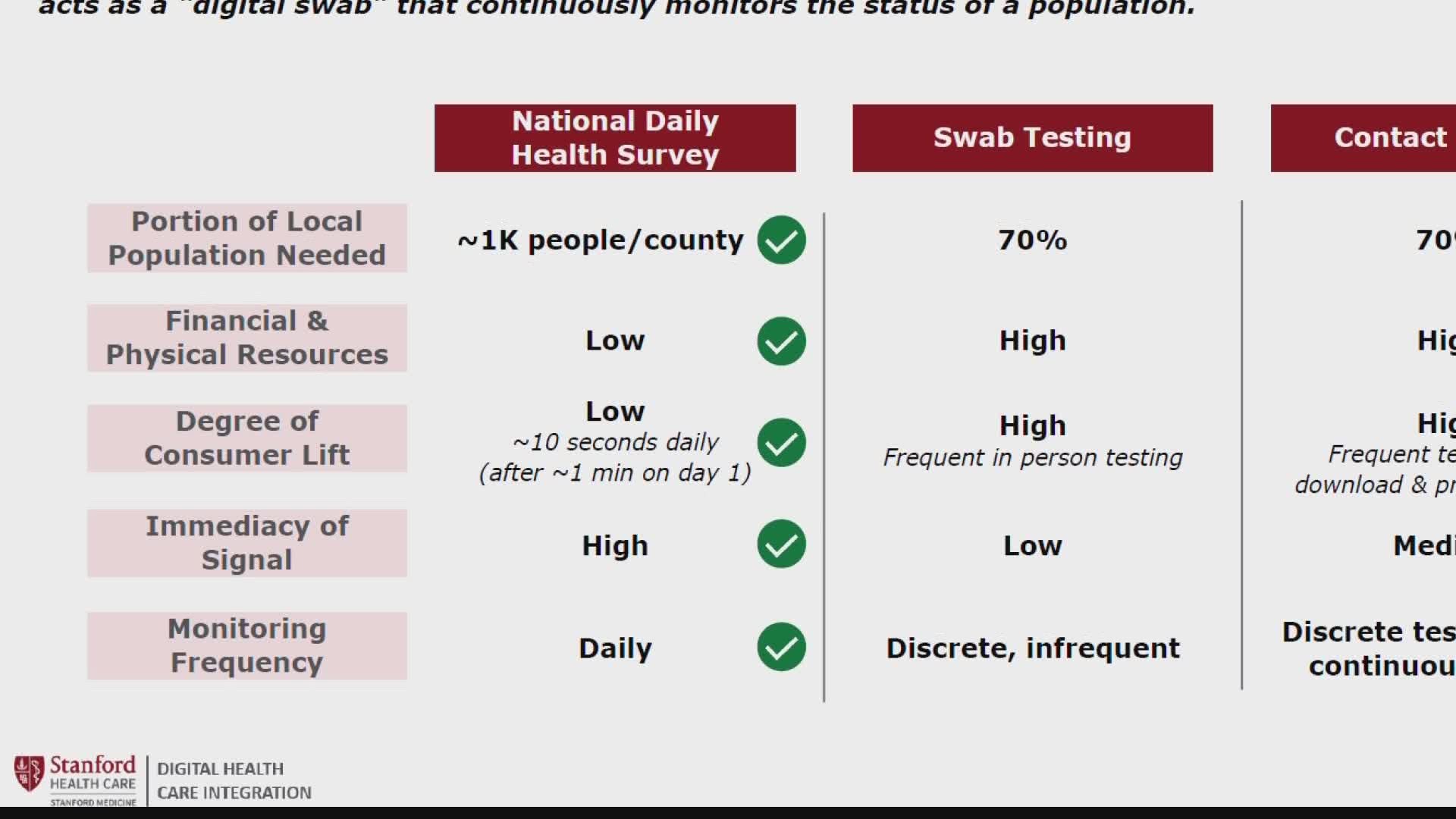 TAMPA, Fla. — The National Daily Health Survey from Stanford Medicine is a way you can help your neighbor, your county, state and the country.

Dr. Rusty Hofmann came up with the idea to track symptoms and quickly identify “hot spots” that pop up in a community before they overwhelm the public health system.  A team from Stanford Medicine monitors the data.

“No one ever said they had enough data to figure out what’s going on with almost any disease.  We are really flying blind, really quite honestly, as we try to figure out how to open up different states, ZIP Codes and counties,” he said.

“Our hope with this digital swab technology is to be able to find ZIP Codes that become hot. Like right next to the Tampa Bay buccaneers football stadium, if there’s a hotspot that comes up on symptoms could you devote public health resources to go and do in person testing to see exactly what’s going on?” he said.

Hofmann says they need about a thousand people in each county to do this every day.  The neighborhood networking site, Nextdoor, is amplifying the message to make it easy for neighbors to sign up and help.

When you first sign up for the survey, you’re asked to provide your ZIP Code, age, other demographics and whether you have symptoms or have been exposed.  It takes less than 5 minutes.

For the survey to have its most powerful impact, users fill out daily follow-up surveys that consist of two questions:

Since your last survey do you feel better, worse or the same?

Are you experiencing any symptoms today?

The follow up survey takes less than 10 seconds.  Stanford sends a reminder via email and is working to send reminders via text.

The idea is: shower, coffee and survey.

“As a doctor one of the most important things when I see my patients in the hospital the first question I ask them and it’s a question you will see and have seen on the return survey is do you feel better, worse or the same because that little small change that provides the most subtle of information to doctors and scientists,” he said.

Hofmann says this does not eliminate the need for tests, but it can help them identify where public health officials need to do testing.

The goal is to detect a change before anyone even gets tested or ends up in the hospital which can save days in getting ahead of this virus and lives.

“Doing this every single day, we’re going to be able to keep track of this virus before it would likely get out of control which is all of us in the healthcare field that’s our biggest fear,” he said.

The Stanford Survey launched on April 1 and they have about 1.6 million people interacting.  While they need more time and more users to home in on the county level, Hofmann says they’ve seen on a large scale the downward trajectory in illness.