The Old Greenbelt Theatre remains closed after the pandemic forced it to shut down in mid-March. As a result, organizers say tough decisions have had to be made.

GREENBELT, Md. — Inside the Greenbelt Historic District, the Old Greenbelt Theatre has sat shuttered for the past seven months. Some of the surrounding businesses, however, have reopened, with groups of people sitting outside on Thursday enjoying a fall day.

Seeing the theater quiet and not offering showings is certainly a leap away from the "normal" times for the venue.

With the theater first opening in 1938, and then again in 2015 after a group started a nonprofit running the facility, moviegoers have become accustomed to always being able to stop by and watch movies on the big screen.

"Up until March 13, we had never closed," Caitlin McGrath, the executive director for the theatre, said. "Three hundred and sixty five days a year for almost five and a half years.”

This year, however, has brought a much different story.

After closing its doors in March due to the pandemic, the shutdown of business led to tough decisions for the small team that runs the facility.

"We had to radically reduce all of the fixed costs as much as we could even to the point of reducing the speed of our internet," McGrath said. "We had a successful PPP (Paycheck Protection Program) application but once that money ran out, then we had to furlough just about everybody.”

The closure reached beyond movie showings.

"We show movies seven days a week but we have a lot of community events," she said. "We are a gathering space for bringing people together.”

In the meantime, the theater staff has resorted to offering streaming releases, curbside popcorn pickup every Friday and organizing outdoor movies with the local recreation department.

"It’s been really challenging," McGrath said. "It’s obviously been the hardest thing we’ve ever had to deal with.”

With Prince George's County Executive Angela Alsobrooks announcing on Thursday that the county will stay in Phase 2 of reopening due to high coronavirus metrics, the theater will have to wait a bit longer to open doors to customers again. 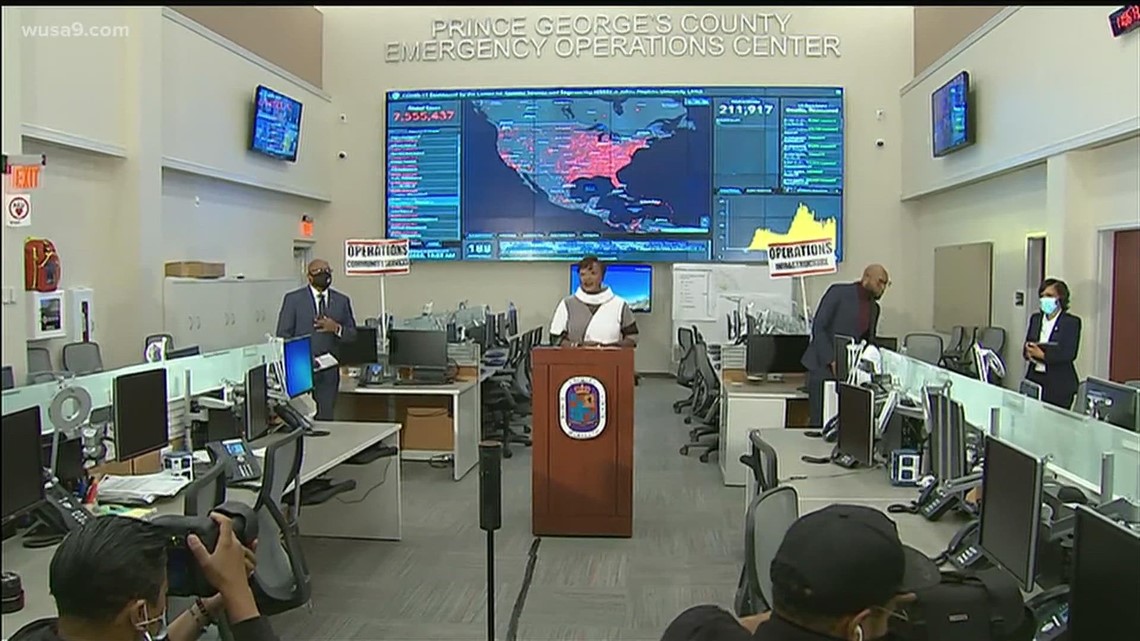 Prince George's County advises against trick-or-treating
County health officials suggest that if anyone gathers with members outside of your household, they should wear a face-covering at all times. PRINCE GEORGE'S COUNTY, Md. - Halloween this year will look a lot different in Prince George's County due to the coronavirus pandemic.

During a press conference on Thursday, Alsobrooks said preliminary data for last week showed Prince George's County's positivity rate has increased to 4.2%, after hitting a low of 3.5% for the week of Sept. 20.

“While we have made some progress over the last two weeks, our COVID-19 metrics are still higher than we would like, and we have reached a plateau in our data,” she said.

Following the announcement on Thursday, McGrath said she understood the decision made by Alsobrooks.

"The last thing we want to do is be part of some super-spreader event," she said. "It’s a really complicated calculation for us to make and I think at this point, we’re okay with being in standby mode.”

Due to the theater's small size and single screen, McGrath said the Old Greenbelt Theatre would face an uphill battle having to organize for limited audiences.

The struggles come as other movie theaters around the country face similar challenges.

The Regal theater chain recently announced it was temporarily shutting down all 536 locations due to "an increasingly challenging theatrical landscape" as a result of the pandemic.

Other theaters have been impacted by the delay of big releases by movie studios.

McGrath noted how movie theatres have survived challenging times before, from the advent of television to the rising competition of streaming services.

While the Old Greenbelt Theatre faces an unknown timeline ahead for reopening, she believed audiences would feel the need for the movie theater experience once it opens its doors again.

"I do think that when this all lifts, I think there will be that desire again to gather together as a group, to be immersed with your community and to laugh and cry together," she said.