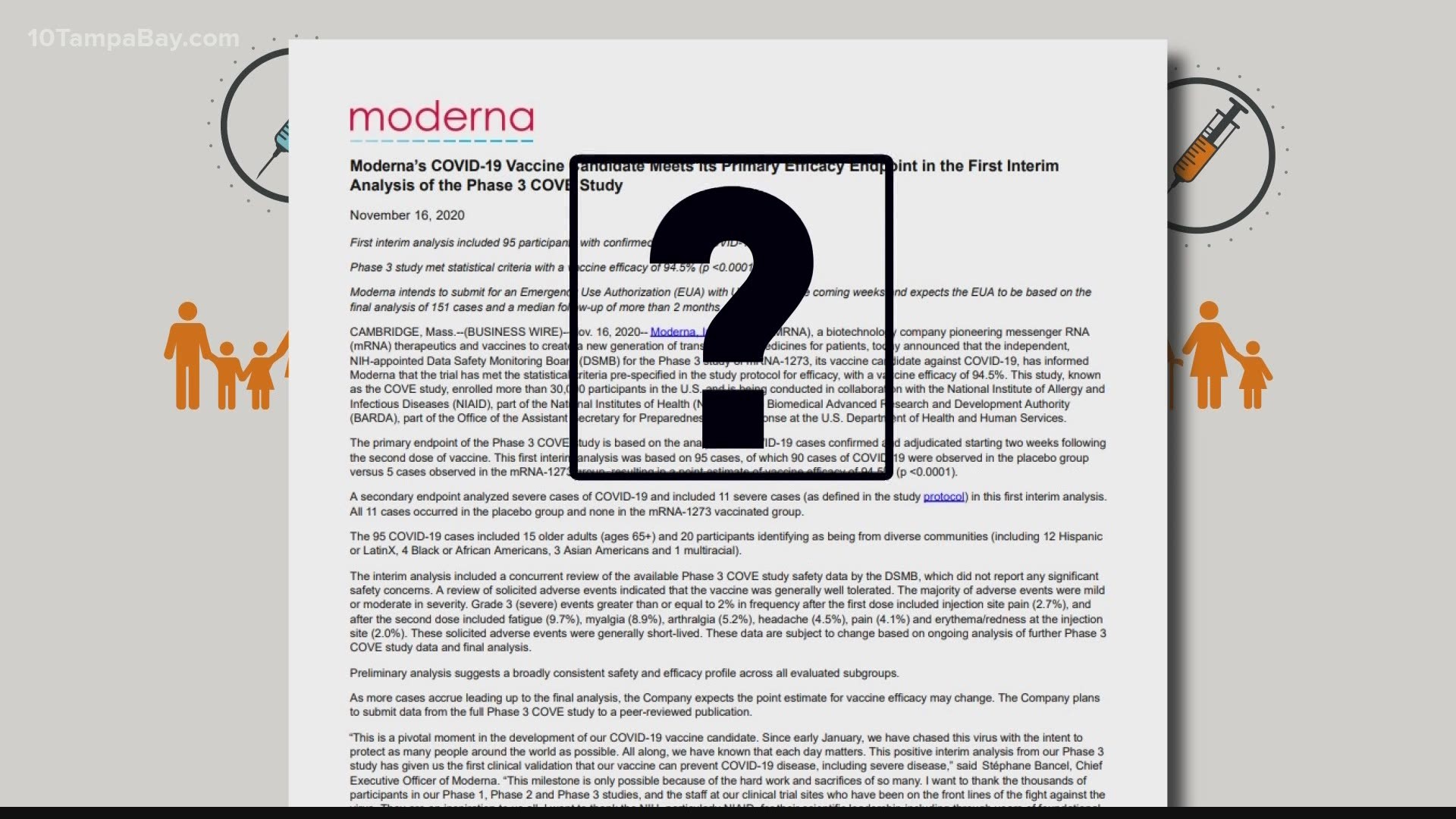 ST. PETERSBURG, Fla. — While the early success of two COVID-19 vaccine candidates is a big step toward curbing the coronavirus, these successes are being revealed through company press releases and not peer-reviewed research.

University of South Florida virologist Dr. Michael Teng says, for that reason, there’s still a lot of details we don’t yet know.

“There are obviously a lot of things that these press releases don’t tell us,” he said. “We don’t know safety yet because we haven’t gone through the two-month period the FDA mandates.”

Teng is referring to the benchmark neither company has yet reached: two months since the second shot for half of the candidates participating in the trial. Generally, severe reactions to a vaccine occur within six weeks of receiving it.

Pfizer has said it will reach that milestone later this week. So far, no serious side effects have been reported.

“Normally vaccine (trials) go for a significant amount of time—for like a year—to see if there’s any safety issues,” Teng said.

“We don’t have that luxury this time.”

It remains unknown how long a vaccine would protect patients who do receive it.

Moderna said Monday that its vaccine candidate is 94.5 percent effective. Out of 30,000 volunteers, 95 people came down with COVID-19, of which 90 received the placebo.

Similarly, Pfizer reported last week preliminary results for its vaccine showed it was more than 90 percent effective, after 94 patients—most of whom received the placebo—developed COVID-19.

“If this vaccine maintains its efficacy through all the data points it’s going to be much more effective than the flu vaccine, which is 50 to 60 percent effective,” Teng said. “Even if it lasts a year it’s good because that will help us control the situation.”

Neither company revealed details of trial participants which makes it difficult, says Teng, to determine how effective it is among different subsets of the population—like those most at risk.

“We have no demographics on the people who actually got infection or were protected from infection,” he said. “So we don’t know if there’s elderly people in there, if there’s younger adults in there.”

What is clear is that with other vaccines still in development, it’s possible we could wind up with several options in the end, which Teng says is a good thing.

"The flu vaccine is made by multiple companies--they're all relatively the same but made by different companies and this is really what we need,” he said. “These vaccines will not be as easy to make as a flu vaccine and we'll need multiple vaccines to be able to scale up production."

Even if the companies receive emergency authorization by the end of the year and start vaccinating people who are considered high-risk, the trials are expected to continue for several more months after that.

The Trump administration thinks the vaccine will be widely distributed by April. On Monday, President-elect Joe Biden said he hopes to work on a distribution plan before the inauguration, digging at President Trump's refusal to cooperate with a transition of power.