There's been an emphasis in the U.S. on trying to track the number of COVID-19 cases, not recoveries. The numbers for both are likely higher than what's reported. 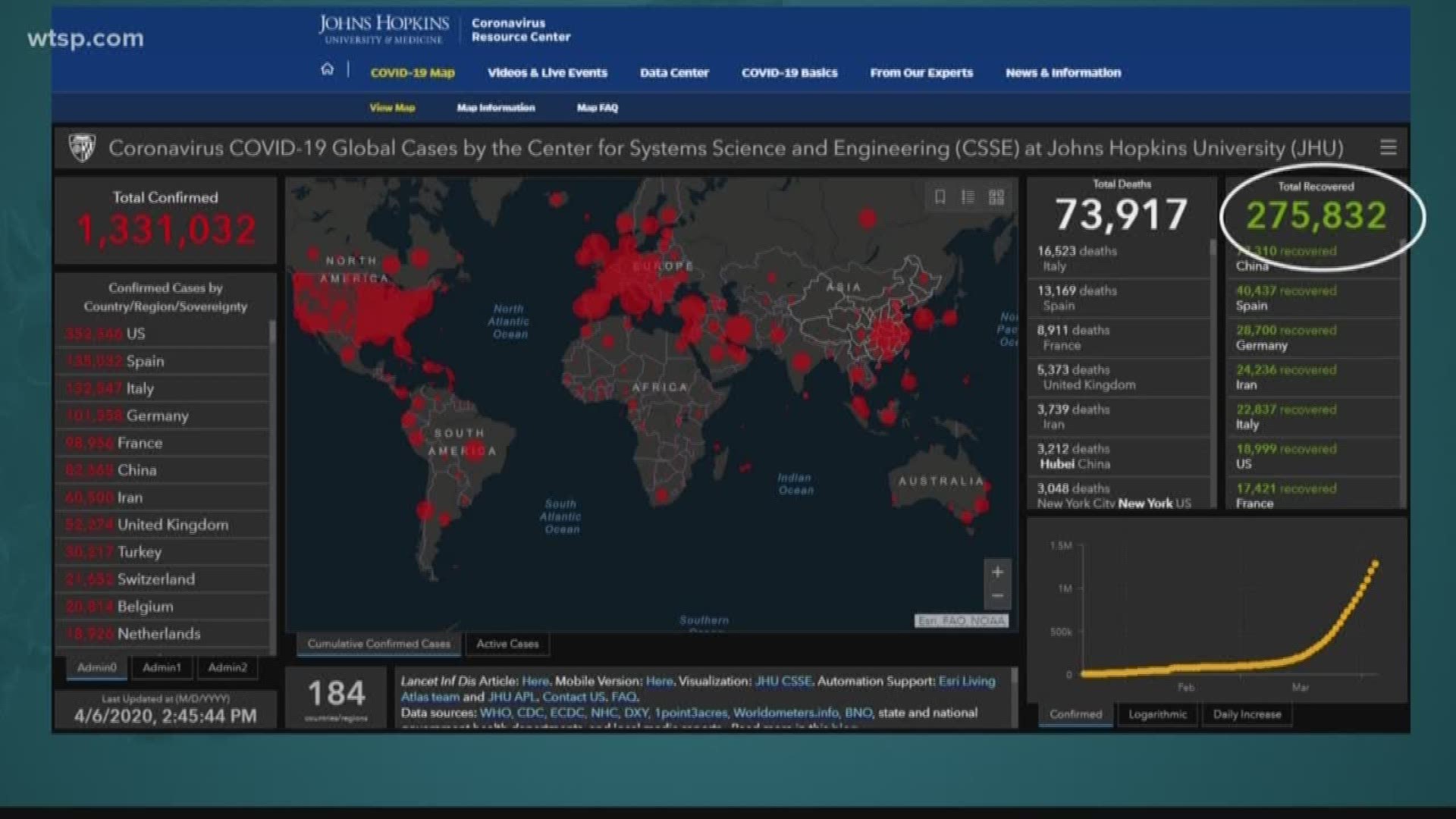 ST. PETERSBURG, Fla. — As the widely-reported number of COVID-19 coronavirus cases go up and up, there's another number that's been somewhat elusive.

It's this: How many people have recovered from coronavirus?

Johns Hopkins University and Medicine was one of the first organizations to publicly track the number of coronavirus cases worldwide, including the total number of people recovered.

As of Monday, April 6, there are more than 1.3 million cases of coronavirus worldwide, with a little over 277,000 total people who have overcome the respiratory virus.

“Recovered cases outside China are estimates based on local media reports," Donovan said. "And may be substantially lower than the true number.”

Recoveries in the U.S., tracked at about 15,000, is an estimate because of the state-by-state patchwork of reporting methods nationwide, Donovan said. There is no nationwide uniform method for reporting recoveries.

The Centers for Disease Control and Prevention says most people who get sick with coronavirus will have mild illness and should recover at home, without the need for additional hospital care. It's said many of those cases — those who have the virus and those who recover from it — won't show up in the official count.

Dr. John Sinnott, an infectious disease expert at Tampa General Hospital and the chair of the College of Internal Medicine at the University of South Florida, said another issue is the lack of consensus regarding the definition of "recovered" — is it when you no longer have symptoms, no longer contagious, no longer in the hospital or when you test negative?

Not to mention, Sinnott said, the resources and manpower necessary for followups are likely in short supply right now as we've only recently gotten a handle on testing.

“The CDC says you’re recovered if you don’t have a fever for 72 hours, if you have seven days without symptoms and you have two negative tests," Sinnott said.

The figures for the total number of cases and recoveries probably are higher than what is being reported because of a lack of nationwide testing.

"People are recovering from this, absolutely," said Casey Kelley of Northwestern University's Feinberg School of Medicine. She told U.S. News and World Report the testing priority has been on diagnoses of coronavirus, not recovery.

The Florida Department of Health did not respond to our questions about whether the state would begin tracking and reporting recoveries.

RELATED: Coronavirus in Florida: State ranks 2nd in the US for testing