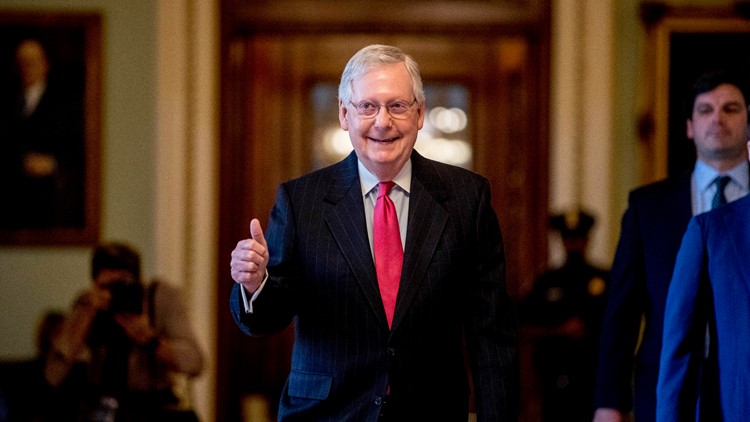 Photo by: AP Photo/Andrew Harnik
Senate Majority Leader Mitch McConnell of Ky. gives a thumbs-up as he leaves the Senate chamber on Capitol Hill in Washington, Wednesday, March 25, 2020, where a deal has been reached on a coronavirus bill. The 2 trillion dollar stimulus bill is expected to be voted on in the Senate Wednesday.

The U.S. Senate is expected to vote Wednesday on a $2 trillion stimulus package to help American families, boost unemployment and provide critical relief for small businesses gutted amid the outbreak of the novel coronavirus, COVID-19.

This is the third relief package from Congress, and a major component is the $350 billion in loans for small businesses. Sen. Marco Rubio led the effort as the chairman of the Small Business Committee.

Businesses will not have to re-pay the portion of the loan that is used for things like payroll and operating costs. It is also retroactive and will allow small businesses hire back employees who had to let go prior to this stimulus plan, according to a spokesperson for Sen. Rubio.

3 Daughters Brewing in St. Pete had to let go of 57 workers. They say once details become clear they will utilize everything possible to bring everyone back to work.

“In order for that to happen we need to exist and so the mandate at my company is no different than the mandate of all businesses, quite frankly at every level, is we just have to be here. That’s it. They say they’ll use everything possible to stay open and get everyone back to work,” said CEO Mike Harting.

Harting also addressed unemployment and providing relief to Americans trying to buy food and pay for housing. He says unemployment insurance is not comparable to the pay his employees made.

Floridians receiving reemployment assistance get anywhere from $32 to $275 a week according to the Florida Department of Economic Opportunity.

The federal stimulus plan allows for an additional $600 a week in unemployment insurance.

The DEO says it’s seeing historic increases in claims. Those numbers will be released Thursday. The DEO says the second week of March, the office received 224,000 calls. That is eight times the number of calls they received the first week of March.

The DEO is working to hire more staff to take calls and help with claims. Many have taken to social media complaining of long waits in the processing of their reemployment assistance claims.

The DEO did not respond to requests from 10Investigates on Tuesday, asking how long Floridians should expect to file a claim and have it processed.

A message posted to the site on Wednesday read: "Important: The Florida Department of Economic Opportunity is currently experiencing higher than average wait times when contacting the Reemployment Assistance Program. We apologize for the inconvenience."

Getting cash straight into the pockets of Americans is another major component of the third relief package for the country.

According to the Tax Policy Center, most Americans can expect $1200. The plan allocates $500 for children 17 and younger.

If the Senate moves forward, the House will still have to act. President Trump has said he will sign it.