Stocks are clawing back much of their sharp losses from earlier in the morning Friday, and the S&P 500 has trimmed its drop by more than a third to 0.5%. 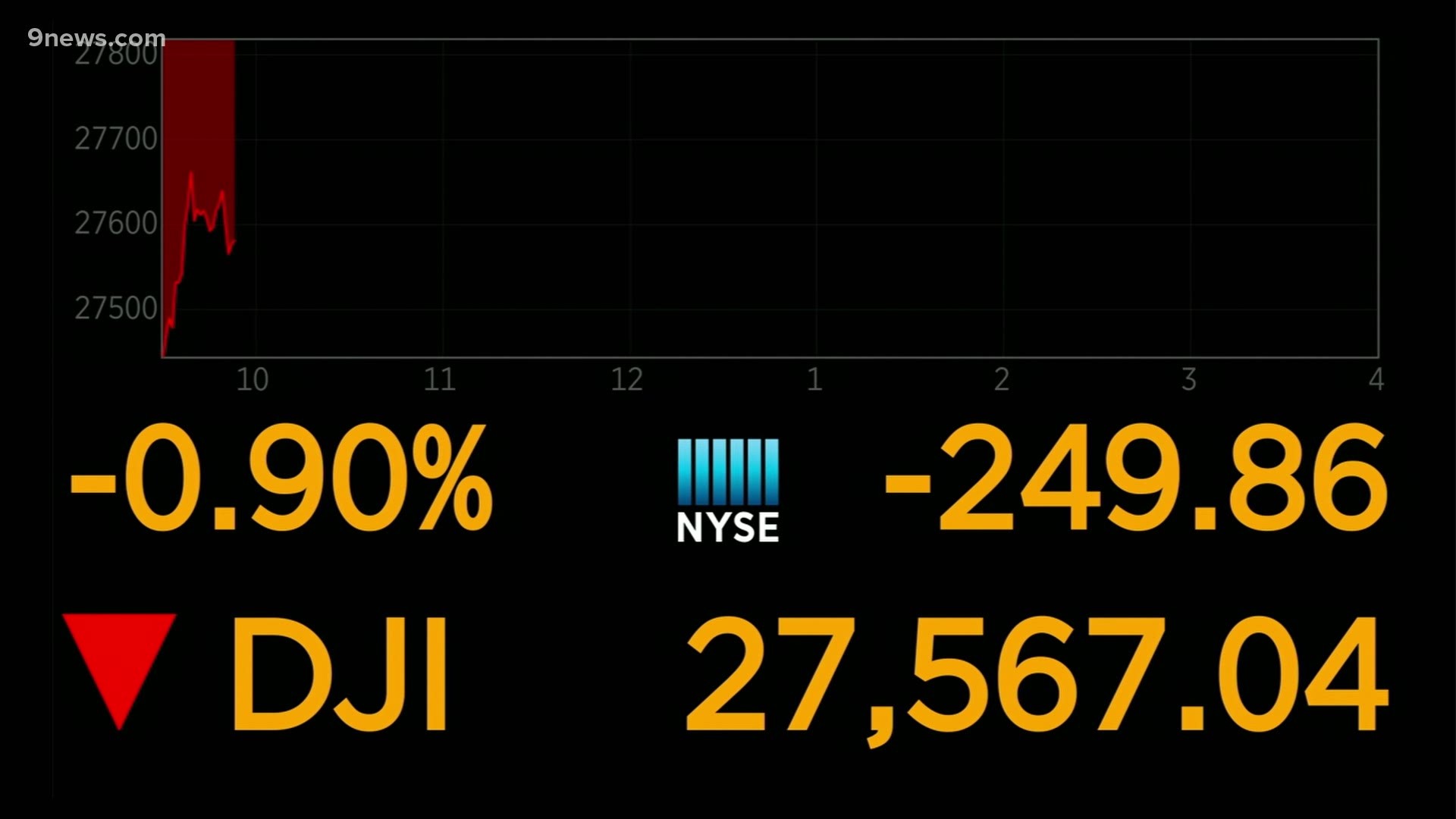 Wall Street is easing off its knee-jerk reaction to sell after President Donald Trump tested positive for the coronavirus, and stocks are clawing back much of their sharp losses from earlier in the morning on Friday.

After slumping as much as 1.7% after trading began, the S&P 500 wavered through the day before cutting its loss to 0.5% by the afternoon. Most stocks across the market were higher, including two out of three in the S&P 500.

The paring of losses came as optimism rose that Washington may be able to get past its partisanship to deliver more support for the economy. House Speaker Nancy Pelosi told airlines in the afternoon to stop furloughing workers because aid for them is imminent. She said a wider rescue package for the economy, one that investors have long been agitating for, could also perhaps be on the way.

RELATED: US hiring slows for 3rd month but jobless rate falls to 7.9%

Big technology stocks remained weak, though, and the Nasdaq composite was down 1.6%. It's a sharp departure from much of the summer, when Big Tech stocks carried the market higher, though their remarkable ascent left critics calling them too expensive.

Tonight, @FLOTUS and I tested positive for COVID-19. We will begin our quarantine and recovery process immediately. We will get through this TOGETHER!

Analysts said some of the market’s movements could be explained by investors building up expectations for a Joe Biden victory of the White House, with Election Day a little more than a month away. That could mean higher tax rates and tighter regulations on companies, which would limit profits and hurt stock prices, but it could also raise the odds of more stimulus for the economy.

“To say this potentially could be a big deal is an understatement,” Rabobank said in a commentary. “Anyway, everything now takes a backseat to the latest incredible twist in this US election campaign.”

Trump’s positive COVID-19 test also highlights the continued spread of the pandemic. The White House physician said the president is expected to continue carrying out his duties “without disruption” while recovering.

But the potential for a further ramp up in infections as the weather turns colder is raising worries that governments may put some more restrictions on businesses.

Also stirring up the market’s movements Friday was the latest report on U.S. jobs growth, which is usually the headline economic data of each month. Employers added fewer jobs last month than economists expected, the third straight month of slowing hiring.

The slowdown is yet another sign that the recovery is trailing off, said Mike Zigmont, director of trading and research at Harvest Volatility Management. The numbers don't inspire bullishness, but they could be a brighter signal for more help from Congress.

“If the conclusion is that the economic data disappoints, Wall Street may say that’s added incentive for the next stimulus deal to eventually go through and more quickly,” he said.

Other reports on the economy were more mixed. Consumer sentiment was stronger for September than economists expected, which is key because their spending drives the bulk of the economy. Orders for machinery and other long-lasting goods also strengthened by more than expected in August, but growth in factory orders fell short of forecasts.

All the uncertainty is making an already shaky market even more so. Stocks have swung through turbulent trading recently amid a raft of open questions for investors: Who will win the election, and what will it mean for the economy? Will the relationship between the world’s two largest economies, the United States and China, keep worsening? Did stocks get too expensive after their 60% surge to record heights through the summer, Big Tech in particular?

In recent days, the dominant question has been whether Washington will be able to get past its partisanship to deliver more aid to the economy.

Extra benefits for laid-off workers and other support for the economy that Congress approved in March has expired, and investors have been clamoring for more assistance. Layoffs have remained stubbornly high across the country, and parts of the economy have slowed with the support from Congress gone.

The House of Representatives passed a Democratic $2.2 trillion package Thursday night, but it has little chance of getting through the Republican Senate. Talks between Democrats and Republicans on a compromise are continuing, but skepticism is high.

Airlines have announced the furloughs of tens of thousands of workers, saying they need more support from Washington as demand for travel has vanished. After Pelosi said in the afternoon that some kind of aid was imminent, their shares shook off earlier losses to climb. American Airlines was up 2.1%, Delta Air Lines rose 1.7% and United Airlines climbed 1.6%.

The yield on the 10-year Treasury rose to 0.69% from 0.68% late Thursday, after pulling back from an earlier loss.

Trading in Asia was thin, with markets in Shanghai and Hong Kong closed. The Nikkei 225 index shed strong early gains to lose 0.7% after the Tokyo Stock Exchange resumed trading following an all-day outage due to a technical failure.

Reports that the Japanese government is preparing new stimulus measures to help the economy recover from a prolonged downturn worsened by the coronavirus pandemic provided only a temporary lift. Prices fell further after Trump’s announcement.