It's the first of the three major vaccines in the U.S. to receive full backing by the FDA. 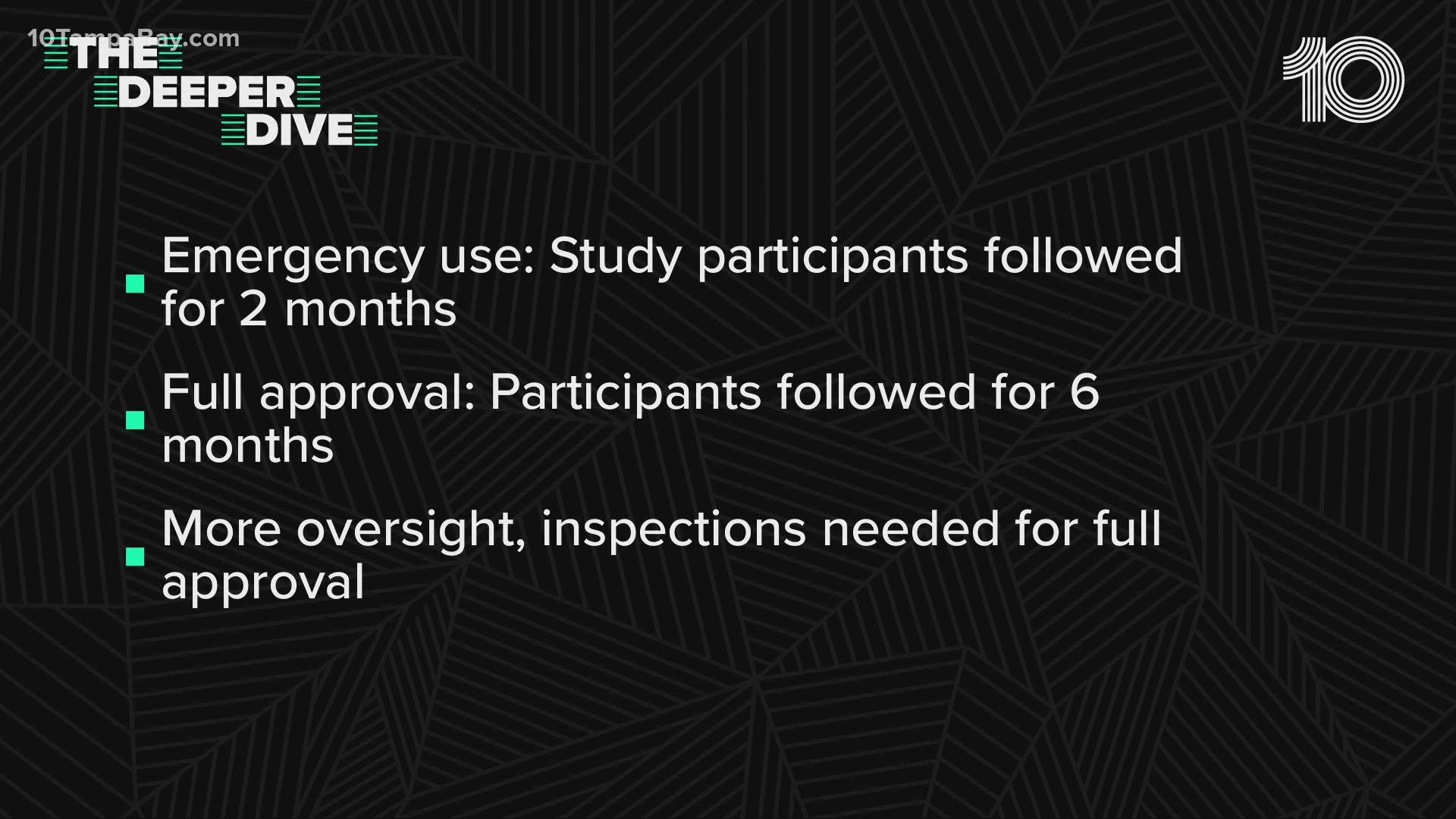 ST. PETERSBURG, Fla. — The Food and Drug Administration on Monday gave its full approval to the two-dose Pfizer-BioNTech COVID-19 vaccine amid hopes its backing will spur more people to get vaccinated.

According to the FDA, the full approval for Pfizer's vaccine applies to people 16 and older, but it remains available for children 12 and older under the existing emergency use authorization.

Last week, the FDA approved third doses of both Pfizer-BioNTech and Moderna's vaccines for the severely immunocompromised.

"The public can be very confident that this vaccine meets the high standards for safety, effectiveness and manufacturing quality the FDA requires of an approved product," said acting FDA Commissioner Janet Woodcock in a statement. "Today’s milestone puts us one step closer to altering the course of this pandemic in the U.S."

A product receives FDA approval when data on the drug's effects have been reviewed by the agency's Center for Drug Evaluation and Research and it is determined to provide benefits that outweigh its known and potential risks. FDA's emergency use authorization is given during public health emergencies to provide access to a product that may be effective and the potential benefits outweigh the known and potential risks.

Full approval is the strongest endorsement the FDA can give, and it has never before had ample evidence to judge a shot's safety, the Associated Press reports.

The number of new vaccine doses administered in the U.S. bottomed out in early July just as the number of new COVID-19 cases began a dramatic spike, according to data from the Centers for Disease Control and Prevention.

The FDA’s action also may spur more vaccine mandates by companies, universities and local governments. This month New York City, New Orleans and San Francisco all imposed proof-of-vaccination requirements at restaurants, bars and other indoor venues. At the federal level, President Joe Biden is requiring government workers to sign forms attesting that they’ve been vaccinated or else submit to regular testing and other requirements.

Anxious Americans increasingly are on board: Close to 6 in 10 favor requiring people to be fully vaccinated to travel on airplanes or attend crowded public events, according to a recent poll by The Associated Press-NORC Center for Public Affairs Research.

“Mandating becomes much easier when you have full approval,” said Dr. Carlos del Rio of Emory University. “I think a lot of businesses have been waiting for it.”