Democrats have called on Chair Vanessa Baugh to step down after she handpicked two ZIP codes where people would be eligible to get a COVID-19 vaccine. 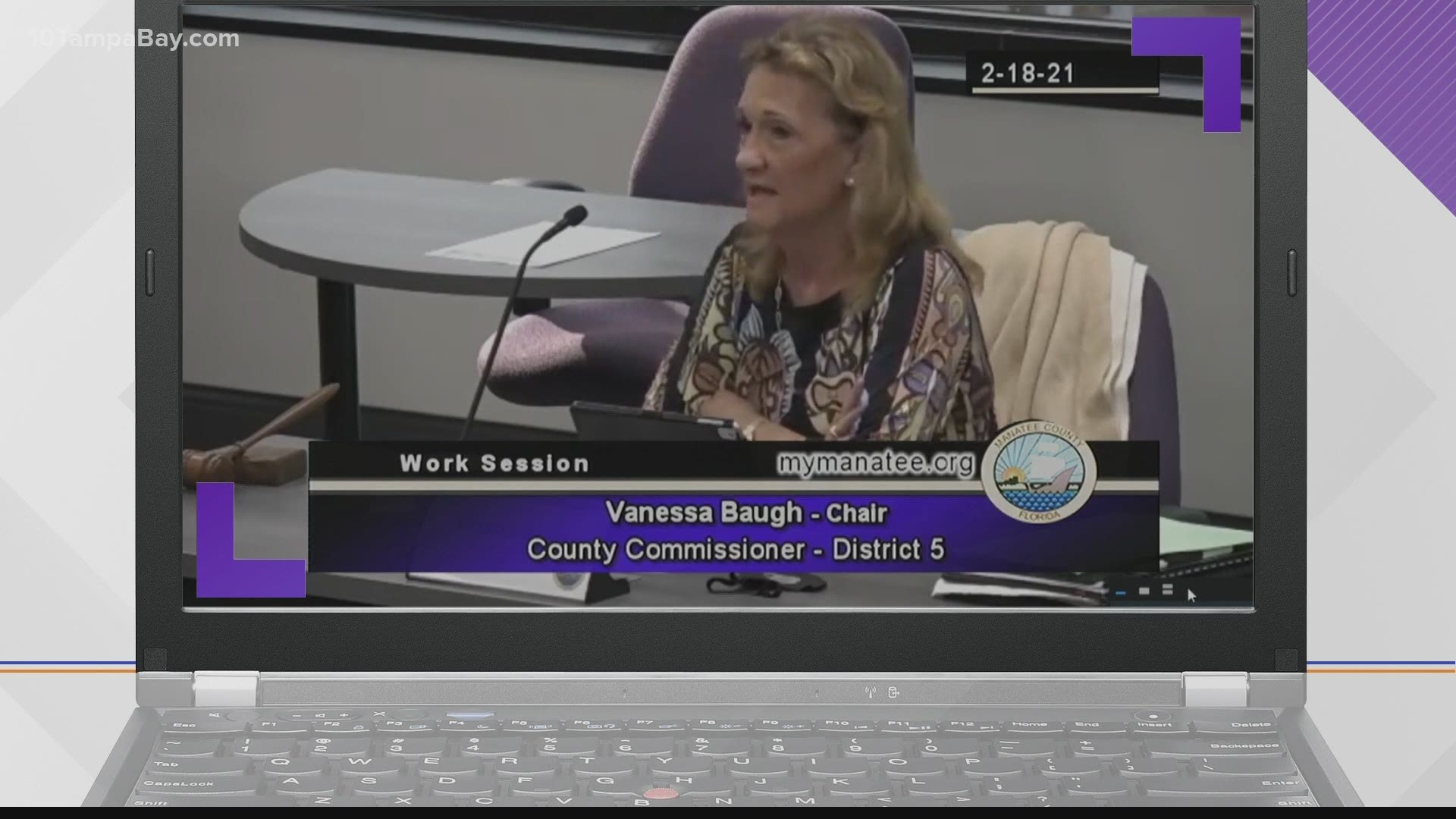 LAKEWOOD RANCH, Fla. — Manatee County Commission Chair Vanessa Baugh indicated she has no plans to resign after she asked for her name to be included on a list of those who could get a COVID-19 vaccine at a state-run vaccination site she helped establish.

Baugh told commissioners during a workshop earlier this month she chose to make available the 3,000 vaccine appointments to those who live in ZIP codes 34202 and 34211 in and around Lakewood Ranch instead of randomly through the county's vaccine lottery system. She later apologized "to all the residents who I have disappointed in any action that I’ve taken according to some news outlets."

Baugh, a Republican, has since said she will remain a county leader, according to 10 Tampa Bay news partner, WWSB-TV.

"I have apologized to my constituents and my colleagues for a lapse in judgment," said Baugh in a statement in response to calls for her to step down. "These petty partisan political calls are nothing more than the divisive politics our Nation needs to steer away from.

"I will continue working to bring more vaccine to Manatee County and lead us through this pandemic."

The vaccine site in Lakewood Ranch garnered its own controversy given its placement in an affluent neighborhood, a predominately white community. U.S. Rep. Charlie Crist, a Democrat, this weekend called upon the Department of Justice to investigate Republican Gov. Ron DeSantis and whether the state's vaccine sites are being set up to "benefit political allies and donors."

Crist in his letter stated Lakewood Ranch's parent company is owned "by one of the largest Republican donors in the country, including contributing over $900,000" to DeSantis.

Baugh during the workshop said she assisted DeSantis and Rex Jensen, the president and CEO of Lakewood Ranch developer Schroeder-Manatee Ranch, in setting up the site.

"It has nothing to do with Manatee County Commission," Baugh said at the time.

The Bradenton Herald reported on an email, later obtained by 10 Tampa Bay, showing Baugh sent a list of five names, including hers, to Manatee County Public Safety Director Jacob Saur. She requested to include Rex Jensen and son Lawrence Jensen -- who do not live in the ZIP codes -- and Robert and Marie Keehn -- who live near Baugh -- to get access to the vaccine site.

Baugh admitted responsibility for sending the email, saying she herself did not receive a vaccine. But she double-downed on the decision to bring the site to Lakewood Ranch without the knowledge of other county commissioners, according to the Herald-Tribune. The newspaper reported Commissioner Misty Servia said every county resident 65 and older is a VIP and "there should not be any other VIP list."

Data shows the coronavirus has disproportionally affected racial and ethnic minorities across Florida. According to the latest report by the Department of Health, more than 1.7 million white people in Florida have been vaccinated. That compares to just more than 920,000 people who make up several demographic backgrounds.

The data is comprised of people who have received just their first shot and those who are considered "series complete" in receiving two doses.

RELATED: Some Black communities in Florida have no vaccine access