The last time Florida Gov. Ron DeSantis held a news conference was Nov. 4, the day after the election to applaud Florida's handling of processing ballots. 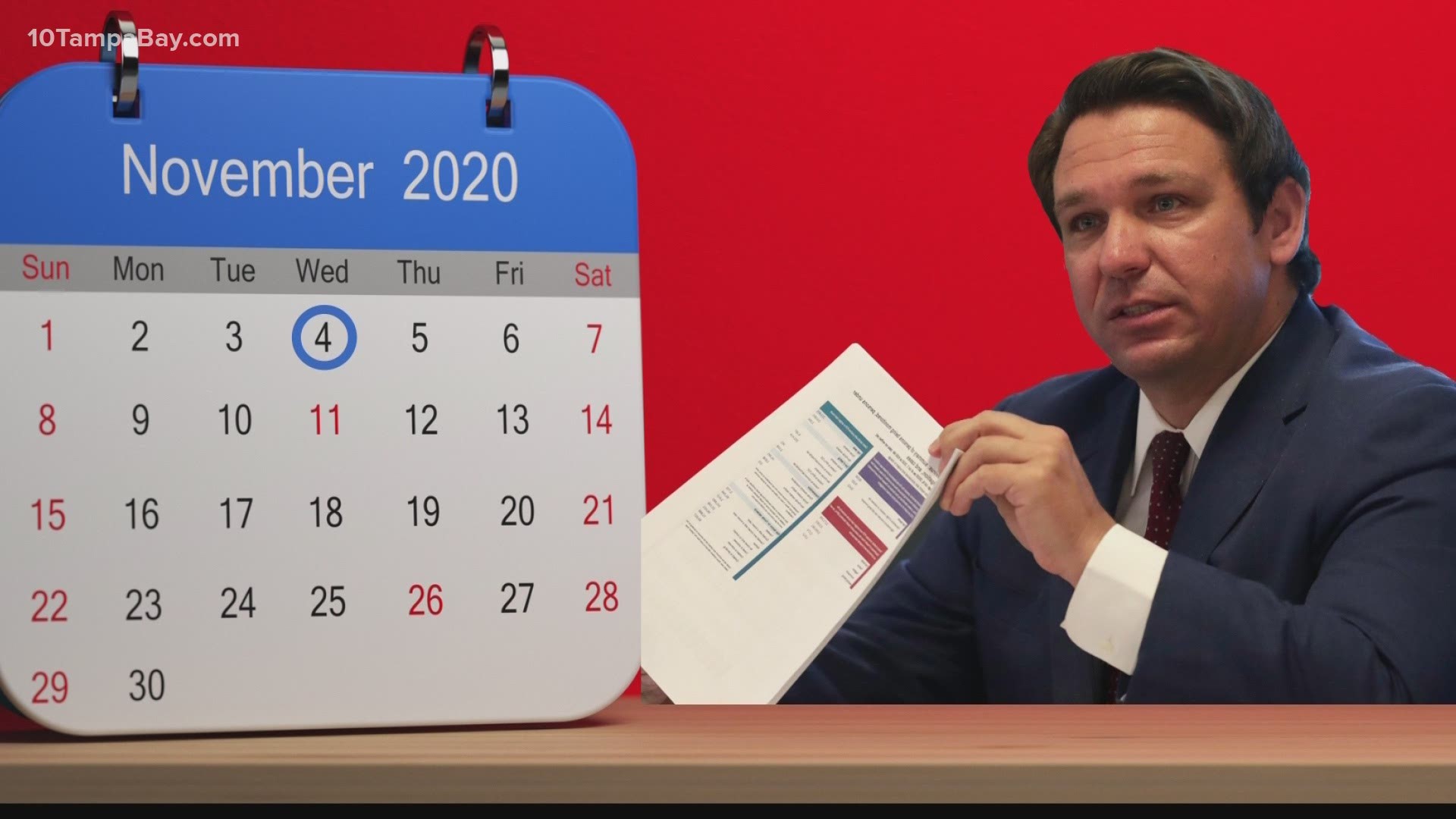 TALLAHASSEE, Fla. — Across the United States, state and city leaders are rolling out restrictions to curb this third wave of the coronavirus.

According to Johns Hopkins University of Medicine, the United States has more than 10 million coronavirus cases, the highest recorded number in the world. Some Tampa Bay leaders are reminding people to be cautious through the holidays but there's been no word out of Tallahassee.

The last time Gov. Ron DeSantis held a news conference was Nov. 4, the day after the election to praise his state for a job well done.

RELATED: Coronavirus deaths are rising again in the US, as feared

We haven't seen him at the podium since then, not even as Hurricane Eta approached our coast. He did, however, tweet throughout the event and make an appearance on The Weather Channel.

I urge all Floridians in the path of #Eta to make preparations now. Follow your local officials and @FLSERT for updates. pic.twitter.com/AHn4aLOwpx

Now, we're looking at another crisis as COVID cases climb across the state. Florida reported more than 10,000 cases on Sunday -- the highest number since July -- and has seen the percent positivity of new cases climb.

"It's quite surprising and alarming, just his absence during this critically important time for Florida's health and future," Rep. Anna Eskamani (D-Orlando) said.

10 Tampa Bay wanted to verify the governor's recent public appearances. According to his daily schedules posted on his official website, his last press conference was Nov. 4 to talk about Florida's handling of the election.

Prior to that, DeSantis held a roundtable discussion on Oct. 27 to address the opioid crisis.

The week before that was the last time he talked COVID-19, on Oct. 22 to loosen restrictions at long-term care facilities and on Oct. 20 to talk schools when he said, "Going forward, whatever the future may hold, school closures should be off the table."

The governor has consistently supported keeping schools open on behalf of the mental and emotional well being of kids and families.

Fast forward to Tuesday, DeSantis attended Senate and House organization sessions in Tallahassee but has yet to address the public.

"Governor Ron DeSantis is avoiding the media and the public because of President Trump not conceding the national election for president," said Eskamani.

10 Tampa Bay reached out to DeSantis' office several times Monday and Tuesday. We'll update this story if we get a response.