The model, frequently cited by public health officials and the White House, predicts projected deaths could be cut in half through widespread mask wearing. 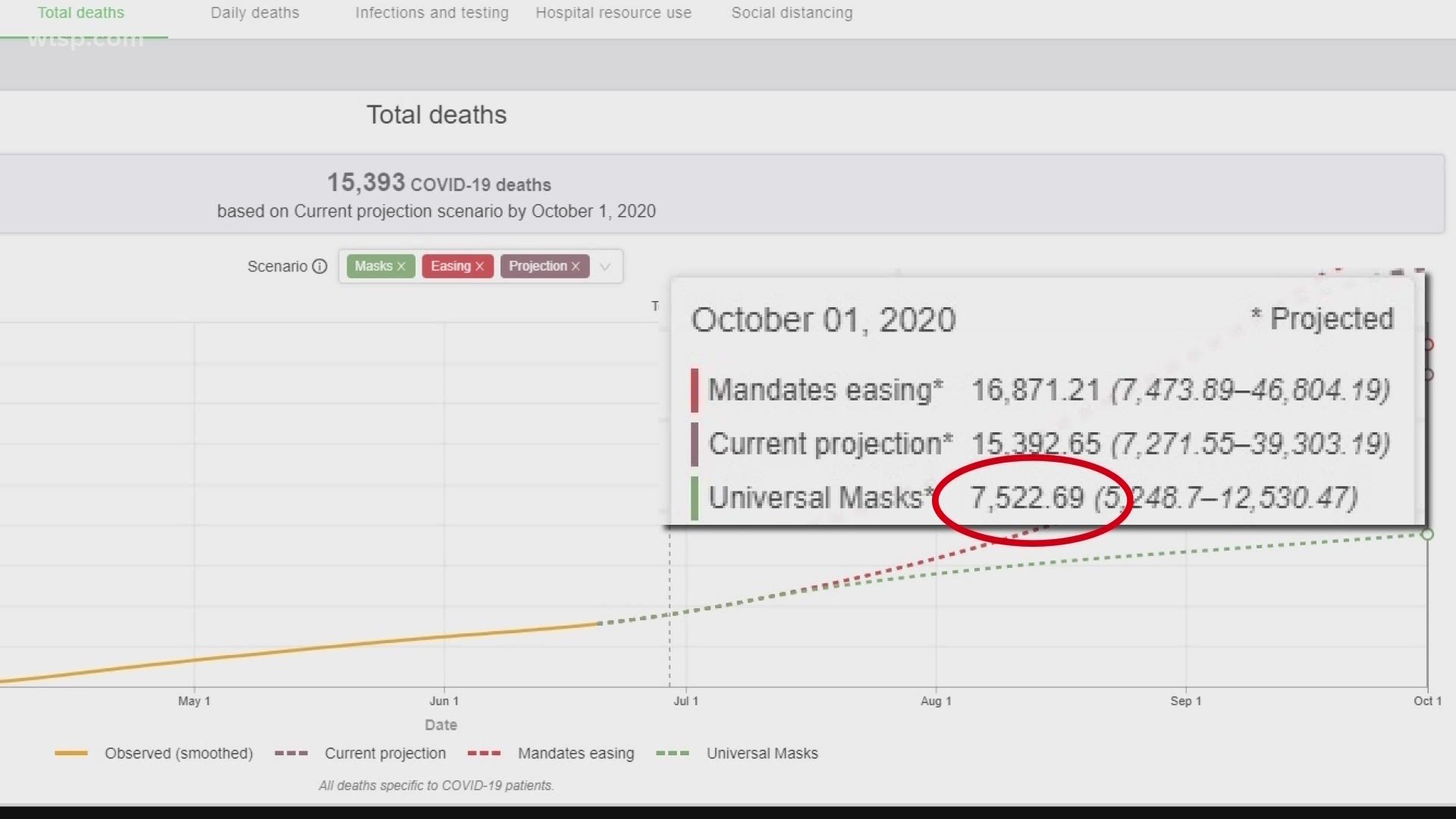 ST. PETERSBURG, Fla. — Widespread mask mandates in Florida could cut the predicted number of COVID-19 deaths by this fall in half, according to projections from the Institute for Health Metrics and Evaluation (IHME).

The IHME model from the University of Washington, frequently cited by public health officials and the White House since the start of the pandemic, predicts nearly 8,000 lives could be saved in Florida through consistent, widespread mask wearing in public.

Before factoring in mask wearing, the model predicts Florida is on track to have 15,393 COVID-19 deaths by Oct. 1. But if 95 percent of the population wears a face covering in public, projected deaths drop to 7,525 by that same time.

That, however, is one big if, says Dr. Jay Wolfson, a professor in public health at the University of South Florida.

“The range here is pretty wide for Florida and it makes an assumption that’s significant,” Wolfson said, who likens the projections guiding us through the pandemic to the spaghetti models we rely on during hurricane season.

“Just as we have no control over how a hurricane is going to pivot, we have very little control over who is going to wear a mask and it’s very difficult for us to mandate that in this country—this is not North Korea, South Korea, Russia, China or even Japan, where authoritarian cultures make it easier for people to follow rules, we’re not very good at that.”

Gov. Ron DeSantis has said repeatedly he’s not interested in a statewide mask mandate, instead preferring to leave it up to local leaders. Last week, 13 state lawmakers, led by Democratic Congresswomen Donna Shalala and Debbie Wasserman Schultz, urged the governor to issue a statewide mask order.

"It's tough in a state where people are not dying around us routinely and where we may not know people who are infected,” Wolfson said. “Until we see, unfortunately to say, a rise in hospitalizations and a rise in deaths it becomes an abstract thing that wearing a mask makes a difference."

But if there is one thing the model does make clear, says Wolfson, it’s that masks do work. Analysis by researchers at IHME found wearing a mask reduces transmission of COVID-19 by 50 percent.

"You know 95 percent of the people are not likely to wear masks,” Wolfson said. “But for every single percentage we can increase—even if it's 10, 15 or 20 percent than we have now—that will have a real effect.”

While President Trump refuses to wear a mask in public, Vice President Mike Pence over the weekend urged Americans to wear face masks, amid a recent increase in new coronavirus cases nationwide.