It’s the first new Alzheimer’s drug approved in decades, despite warnings from independent advisers that it didn't show it helped slow the brain-destroying disease. 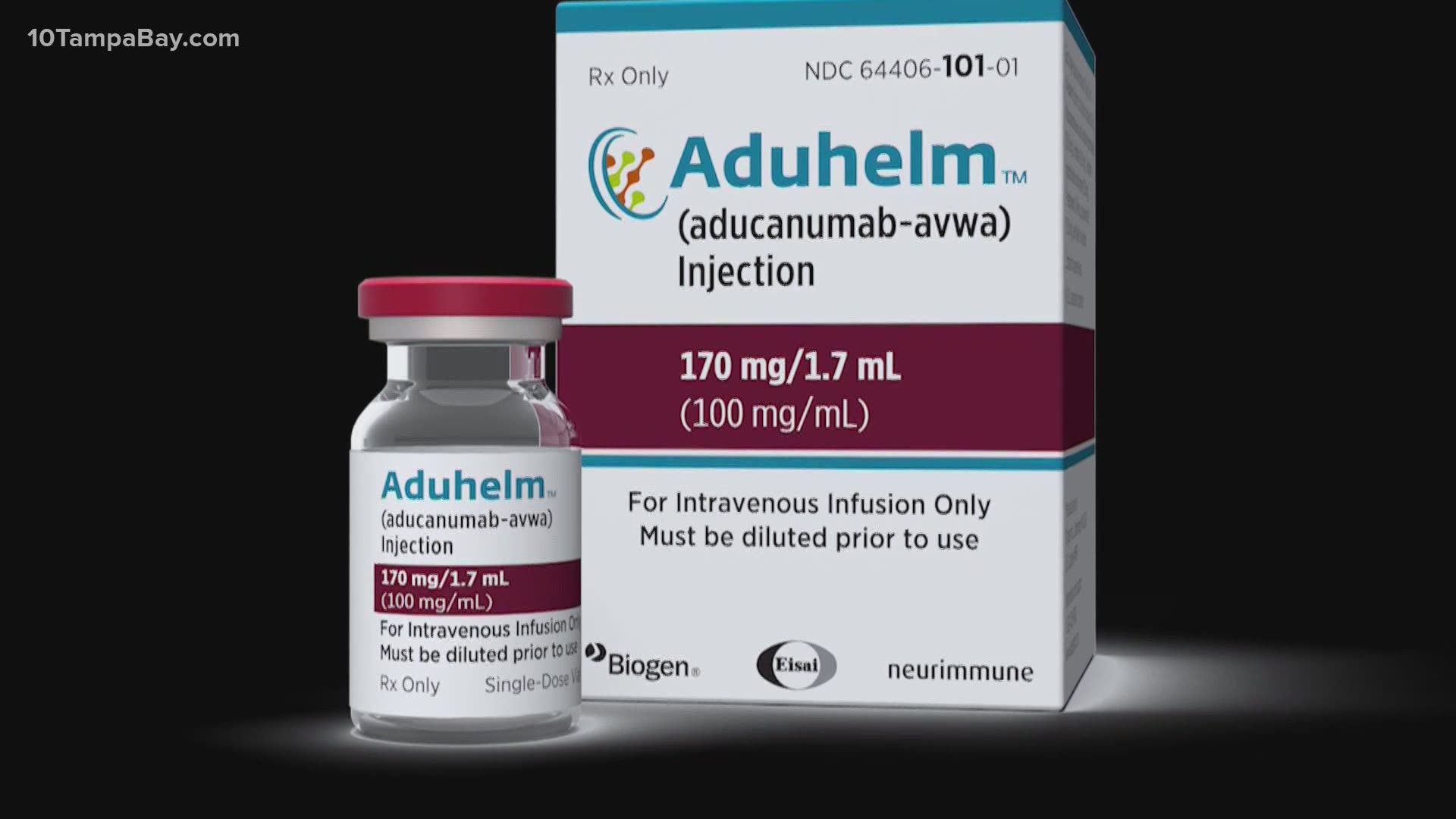 BRADENTON, Fla. — People with Alzheimer's disease now have a new drug to turn to in hopes of gaining more time with their loved ones.

The first new drug for the brain-destroying condition in nearly 20 years received approval from government health officials on Monday.

But not all experts are on board with its approval – in fact – an entire panel opposed it.

Other doctors and patients, however, say the news offers hope and with so few options currently available, that’s a lot.

The drug, called Aducanumab, was developed by Biogen. Patients receive an infusion from their doctor every four weeks, which targets amyloid – a sticky plaque in the brain – with the goal of slowing the disease's impact.

Dr. Amanda Smith, the director of clinical trials at the USF Health Byrd Alzheimer's Institute, said despite initial analysis that showed the drug wasn’t very effective, it later became clear it did have an impact on people who were given higher doses.

U.S. regulators say it’s now the only drug that might actually be able to treat the disease itself, not just manage symptoms.

“It’s a pretty big deal,” said Smith, who lead one of the trials for the drug. “But it’s not perfect, it’s not a miracle, it is hope and it’s better than what we’ve had.”

She cautions families and patients that it’s not something that’s going to work for people in more advanced stages of Alzheimer’s.

The drug is believed it be most effective in people in earlier stages of the disease.

“So these are people who’ve started to have an impact on their day-to-day function but they can still be left alone, they can still perhaps make a phone call or make themselves dinner,” Smith said.

People like Deb Jobe of Bradenton, who was diagnosed with early-stage Alzheimer’s-related dementia two years ago.

“It just blew our world apart and we struggled,” Jobe said. “Because this is a life-altering, progressive, no-cure scenario.”

Jobe, who had a successful career working with Fortune 500 companies for 30 years, says she was forced to stop working. She no longer drives herself, either.

“Imagine working so hard on your career for 30 years and all of a sudden you find you can’t because your brain isn’t processing things well, you’re not remembering things,” she said.

“I lost part of my identity.”

Jobe says she knows this new treatment is not a cure. It may not even work and will almost certainly come at an incredible cost – some estimates are around $50,000 per year. But she says it offers something she didn’t have before.

“It brings hope to me,” she said. “I want to have more time, I want my family, my husband, my new grandbabies to know me the way I am now.”

Jobe says she hopes her situation will encourage others to not ignore potential warning signs in order to catch the disease early.

The National Institute on Aging says there are 10 major symptoms to pay attention to, including: wandering and getting lost, losing or misplacing things in odd places, mood or personality changes and taking longer to complete daily tasks.

The FDA is requiring the drugmaker to conduct a follow-up study to confirm benefits for patients and could pull the drug from the market if the study fails to show effectiveness.