Trendy treatment: Can you fight the flu with IV fluid?

With the flu widespread, some people are turning to an unlikely source to threat their symptoms: IV therapy.But does the drip work? 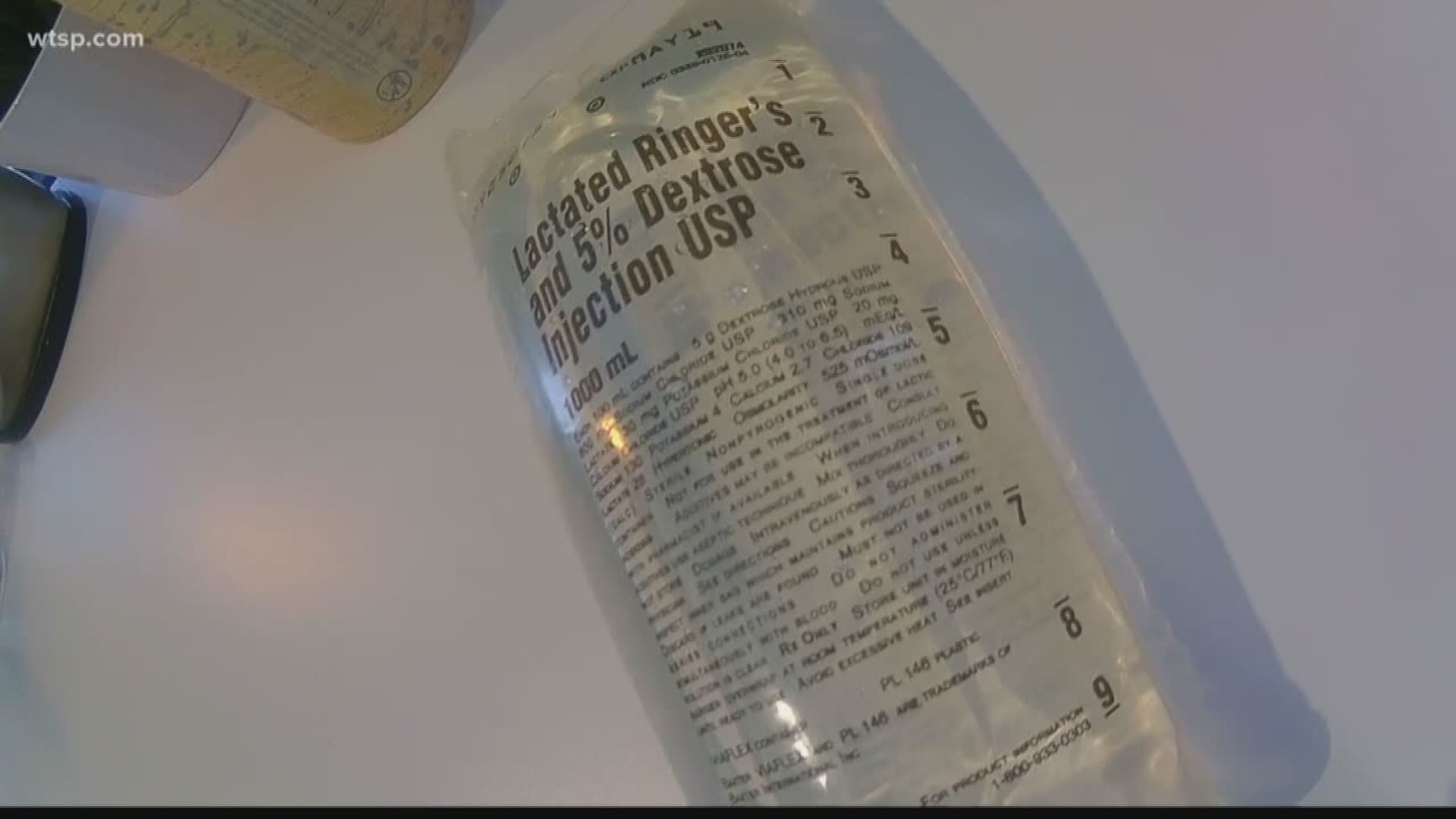 TAMPA, Fla. – We are in the midst of the one the most serious flu seasons on record, according to the Centers for Disease Control.

Things have gotten so bad, the CDC has postponed plans to hold a session on nuclear attack preparedness opting instead to focus on fighting the flu.

The influenza virus is now widespread in every state in the continental U.S, according to the CDC. In Florida, the Tampa Bay area has some of the highest flu rates in the state. Pinellas and Hillsborough counties are among the areas with the most reported flu outbreaks.

That's why some people are turning to an unlikely source: IV therapy to treat their symptoms.

But does the drip work?

More: Got the flu? Here's when to go to the ER

"It really does make a difference," said Melissa Emparato as she sat reclined in a chair with an intravenous line in her left arm inside Replenish IV Solutions in South Tampa.

Emparato said she gets IV therapy at least twice a month. She's convinced that, despite her busy schedule and lack of a consistent diet, it's why she hasn't come down with the flu yet.

"Everyone has been getting so sick lately, it's alarming," she said. "Being able to supplement with the IVs really helps keep my immune system up."

Stephen Gunnin, one of the managing owners of Replenish IV Solutions, says business has been booming more so than usual in recent weeks.

"It's been pretty significant," Gunnin said. "We've seen a lot of people with cold and flu symptoms."

With a menu of vitamin-infusion cocktail drips to choose from, a typical 35 minute treatment session will cost you between $125-175, Gunnin said. Some specialized treatments, however, can cost up to $1,000. Treatments are not typically covered by insurance.

A fairly basic IV therapy cocktail can include vitamin C, zinc and B vitamins.

"It's not a silver bullet against anything," he said. "But it does significantly help your immune system."

Gunnin cautions it's not meant for people who are suffering from several illness or dehydration and it's certainly not a cure-all for the flu. He says results can vary widely between individuals depending on one's overall health.

"That being said, if they have the flu and we can get their immune systems up, anytime your immune system is at a higher level you can fight things off quicker," Gunnin said.

He acknowledges IV fluids do have a role in treating the flu, but that's generally in cases of severe dehydration or vomiting when a patient should be in a hospital. Otherwise, he questions its effectiveness.

"Certainly how you feel may be worth it to you, but in terms of actually shortening the duration of your symptoms it's not going to be terribly effective."

Gunnin disagrees with the assessment and believes it's not just a fad but a proven alternative.

"We view what we do as a supplement to what ER and urgent care provide," he said.

"Compared to drinking water, you're getting all those electrolytes without the sugars from drinks like Gatorade. If we can get them a little bit of vitamins and minerals to get them feeling better, that's what this is doing."