Vivian Wright filed a notice of intent against Heartland of Orange Park, alleging multiple complaints of malpractice in her father's care at the facility. 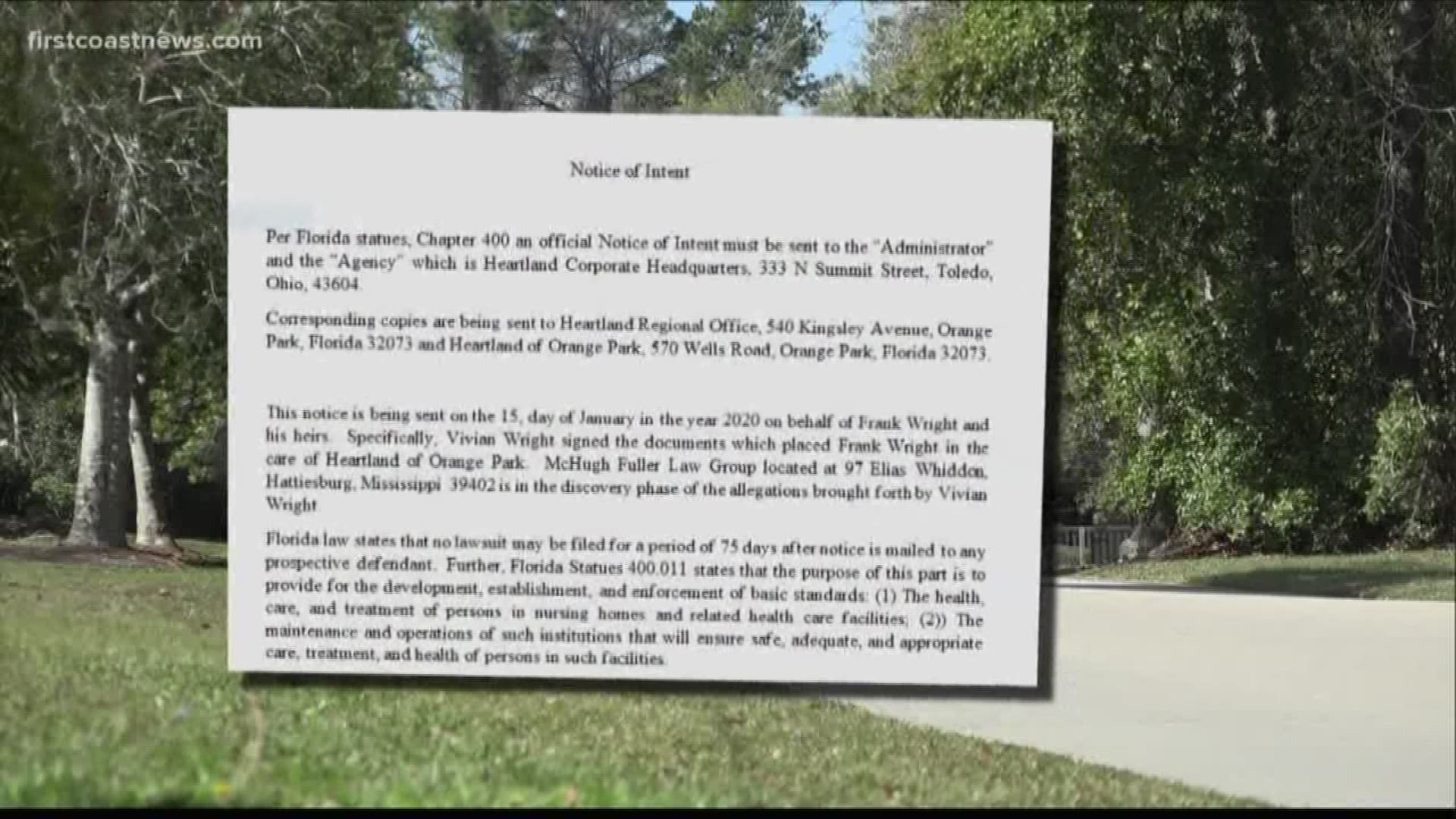 ORANGE PARK, Fla. — One nursing home in Orange Park faces multiple complaints of malpractice as the daughter of one of its patients plans to file a lawsuit against the facility in the coming months.

Vivian Wright's father, Frank Wright, was placed in assisted living after two strokes, the first of which was in 2013. It was a difficult decision for Wright, but she hoped he would receive the daily care he needed to stay healthy.

"At first it was pretty good," Vivian Wright said. "He liked the activities, like the people, liked the attention. Being in the military and all around, you like people and talking to people."

Frank Wright worked for the Department of Defense, as a boilermaker on Navy ships based out of Mayport.

The family man known for always wearing his Navy hat came to Jacksonville in 1955, working for DoD for more than 25 years.

"He spent a lot of time at Mayport working on the Navy ships. He loved being a boilermaker, that was his favorite thing to do," Vivian Wright said.

Now an 86-year-old, Frank Wright is a patient at Heartland. Prior to Heartland, Vivian Wright said her father was at St. Catherine in Jacksonville starting 2013 and has been treated for wounds on his body, high blood pressure and an irregular heartbeat.

She said her father arrived at Heartland in September 2019 following multiple trips to the emergency room in Jacksonville. Shortly after he arrived, Vivian Wright said the family had a meeting with Heartland staff.

"The head nurse, she started talking about hospice. And our jaw dropped. We'd never heard that word, not yet," she said.

From the time her father entered Heartland, Vivian Wright alleges staff at the facility have not taken him to regular follow-ups with his physicians and have neglected continuing care of his wounds.

"He still has rights there, being a Heartland patient," she said. "So that's why we don't want to move him too quickly, and that's why we're doing the notice of intent."

Frank Wright has two wounds on his body associated with being bedridden, his daughter said. One of those wounds is on his buttocks.

One day when visiting her father, Vivian Wright said her brother-in-law looked under the bed and found something strange.

She said the coffee grounds were placed under the bed multiple times to cover the smell from an infection of the wound on the buttocks. Eventually, the wound was drained at Orange Park Medical Center.

"It just seemed normal to them to put coffee ground underneath the bed," she said. "If I had a smell coming from me, I'm going to the emergency room."

"The emotional and physical well-being of our residents is our primary concern.  We take pride in our long-standing history of delivering quality care to the residents of this community, and are sad to learn that a family member of a patient is unhappy with the care being provided. We actively and continuously work with state regulators to ensure that our residents are receiving the care ordered by their physicians, and do our best to provide information and support to families during what can be emotionally stressful situations. In order to preserve the dignity and privacy of our residents, we are unable to comment about family disagreements, potential lawsuits or the specific care given to individual patients.  Federal and state laws mandate that we preserve the rights of our patients and keep such information confidential."

Speaking to On Your Side, Vivian Wright said her father will stay at Heartland until a lawsuit is on record, as the notice of intent mandates a 75-day waiting period.

"I want them to change some procedures and guidelines cause it really doesn't work for everybody," she said. "If they couldn't handle the wound, I don't think they should have accepted him in that facility."

Vivian Wright told On Your Side the Florida Department of Children and Families is investigating the facility after she complained.

A search of Medicare.gov shows two complaints in the past three years at Heartland that resulted in citations. The website lists the facility's rating as "below average."