20 years ago, President Bush learned of the 9/11 attacks while visiting Sarasota

Bush was with students in a classroom at Emma E. Booker elementary school on the fateful day that changed American history. 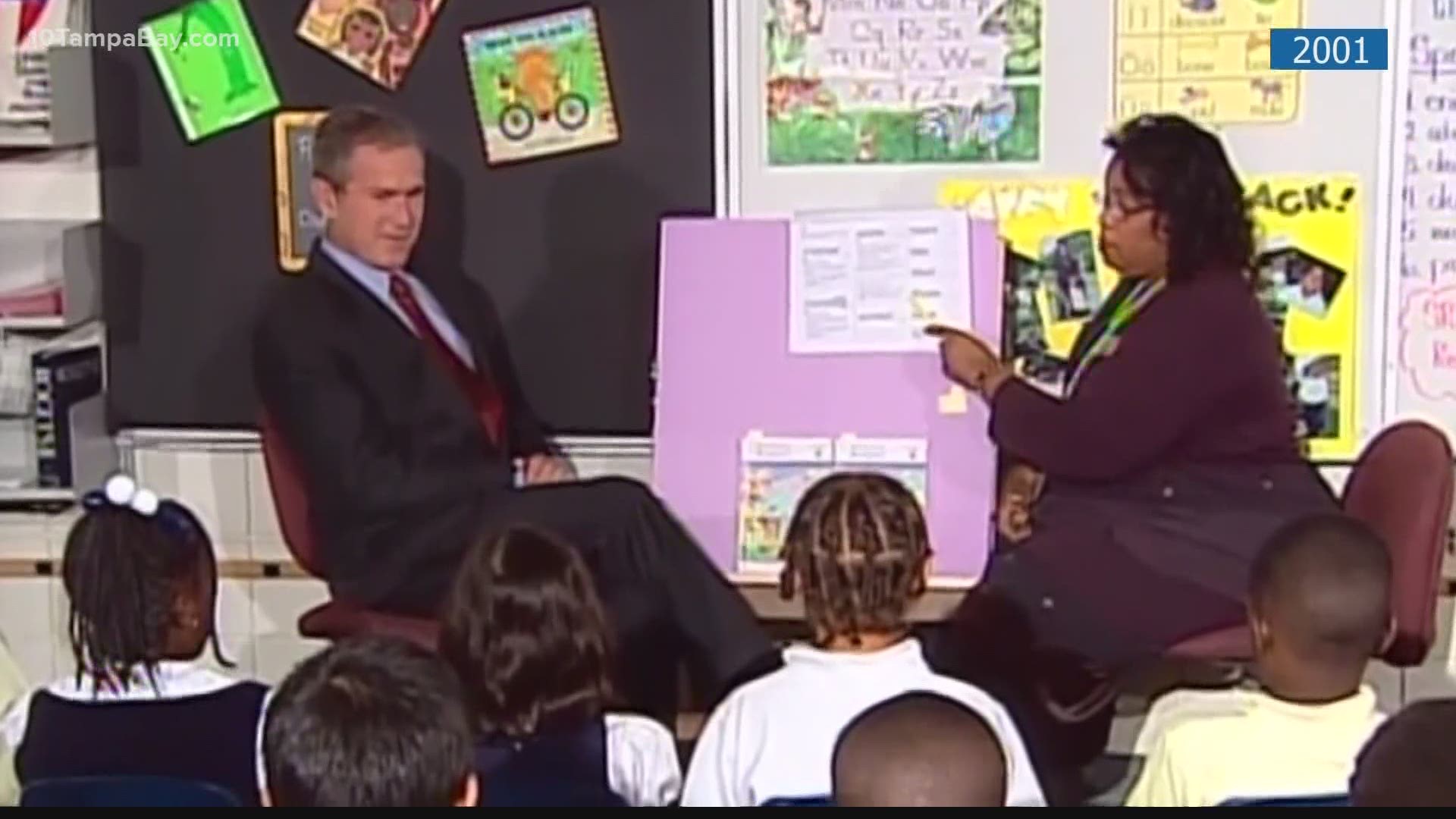 SARASOTA, Fla. — Editor's note: The video in the player above is from 2020 when 10 Tampa Bay spoke to teachers from Emma E. Booker Elementary School.

Twenty years ago, the students of Emma E. Booker Elementary School were preparing for a special visit from then-President George Bush, completely unaware that they would soon become a part of history.

President Bush came to the Sarasota school on Sept. 11, 2001 with plans to promote the No Child Left Behind Act, an education program aimed at boosting progress in underprivileged schools.

But as he sat in a second-grade classroom, reading the story "The Pet Goat" with the students, he was approached by his Chief of Staff Andrew Card, who reportedly whispered to the president, “A second plane hit the second tower. America is under attack.”

Bush's mood shifted, students recalled to the Herald-Tribune, but he remained calm as he digested the disturbing information and planned his next move.

The president reportedly let the students finish reading, and excused himself to go into a holding room where he could be briefed on the details of the attack on the World Trade Center.

The Booker Elementary School teachers sat in the media center, unaware of the events that had taken place in New York, as they prepared for President Bush to speak.

At 9:30 a.m., 25 minutes after learning of the attacks, President Bush addressed the nation, calling the events an "apparent terrorist attack on our country."

After his minute-long statement, Bush and his staff left for Sarasota Bradenton International Airport where he boarded Air Force One and left around 9:54 a.m. for Barksdale Air Force Base in Louisiana.

Clesha Allen, who taught 5th-grade, told 10 Tampa Bay that they were shocked when they learned the news.

“When he came in, announced to the country what happened in NYC, all the adults were stunned," Allen said.

“I heard him say we were attacked by terrorists, that’s not vocabulary we were used to hearing. Terrorism — a word we had to teach students,” speech pathologist Makaya Moran added.

When Allen returned to her classroom, she turned on her television.

“The first thing my students and I saw were the planes hitting the Twin Towers," Allen said. "Then you hear in every classroom intercom going off, parents pulling students out of school.”

Allen was left with five students, but one child asked a question that still saddens her today.

“One student said… Ms. Henry are we going to die? His fear was so palatable I didn’t know what to do. The teacher in me assured him, I said 'no, we’re in the safest place, we have secret service.' My most poignant memory left with me as a teacher. I was responsible for my kids’ security in that moment. I sympathize with the president in that, that’s what he had to do for a nation. I had to do it for five kids, I had to do it for one. He had to do it for our entire country. I thank President Bush for the leadership he gave to us in that hour.”

Today, Booker Elementary has a cabinet filled with reminders of its place in history, including the book the president held while the kids read and a scrapbook. There’s even a plaque outside classroom 301 that commemorates that tragic day in American history.