Secretary of Defense Lloyd J. Austin III and Army Gen. Mark A. Milley called on all Americans to remember what happened 20 years ago. 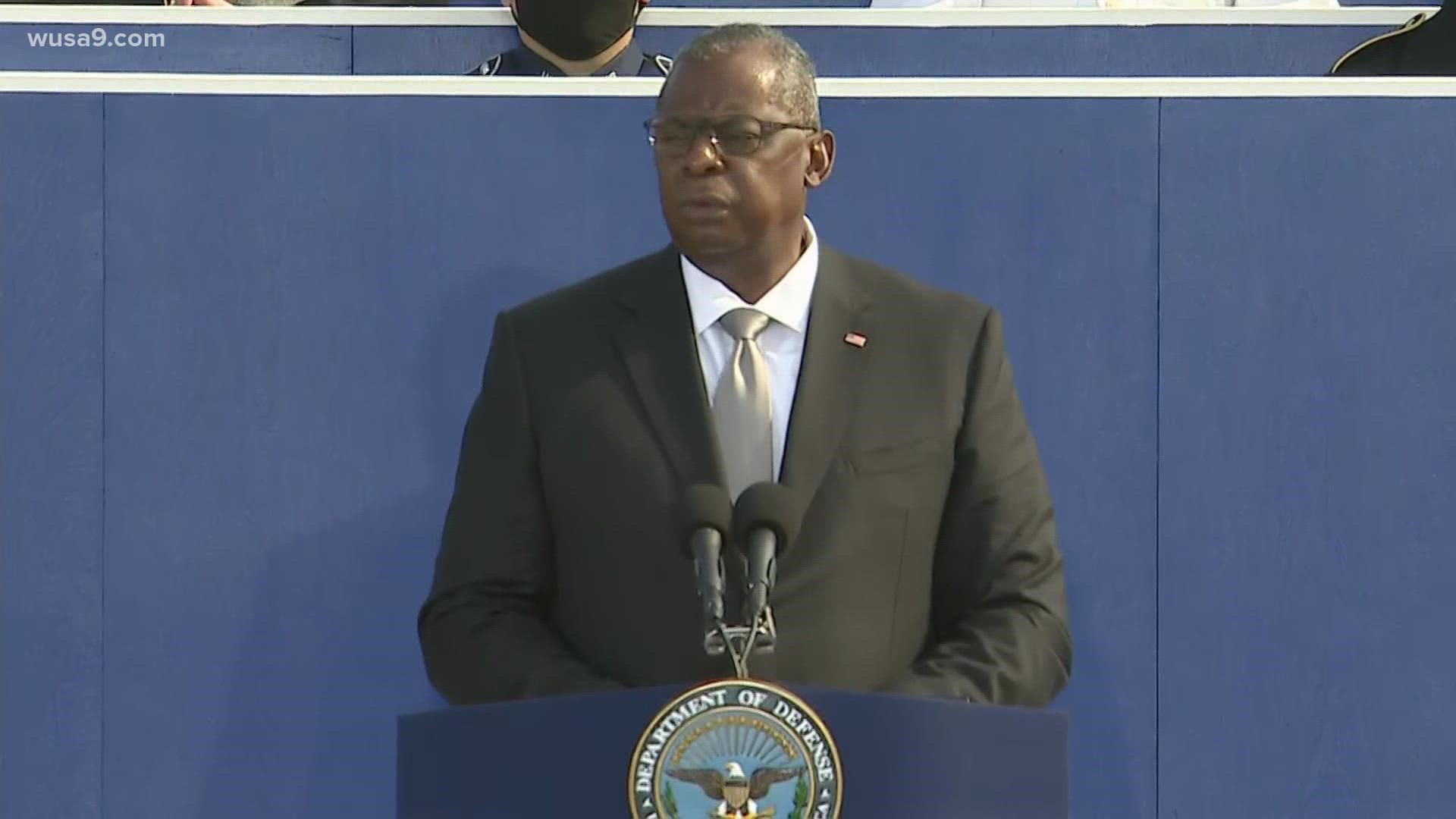 WASHINGTON — At 9:37 a.m. on September 11, 2001, five hijackers crashed American Airlines flight 77 into the Pentagon, killing 184 people. Twenty years to the minute later, Secretary of Defense Lloyd J. Austin III spoke in front of a crowd of hundreds of their relatives, urging Americans not to let their legacy be a forgotten one.

''As the years march on, we must ensure that all our fellow Americans know and understand what happened here on 9/11, and in Manhattan, and in Shanksville, Pennsylvania,'' the secretary said. ''It is our responsibility to remember. ... The hallways that we tread were the ones that so many of them walked. It will always be our duty to fulfill their missions and to live up to their goodness. And to stand guard over this democracy. We still work here. We still remember here, and we still uphold our values here with clear heads and fearless hearts.''

The morning ceremony at the Pentagon marked the 20th anniversary of the September 11 terrorist attacks, where nearly 3,000 people were killed at a trio of sites, including New York City and Shanksville, Pennsylvania.

1 / 12
AP
Attendees listen during an observance ceremony at the Pentagon in Washington, Saturday, Sept. 11, 2021, on the morning of the 20th anniversary of the terrorist attacks. An American flag is draped over the site of impact at the Pentagon. (AP Photo/Alex Brandon)

"Remember them today for not only who they were but what they could have become,'' Army Gen. Mark A. Milley, the chairman of the Joint Chiefs of Staff who joined Austin at the ceremony, said. ''They were irreplaceable to their families, instrumental in their jobs, woven into the fabric of their community, full of life and potential.''

Austin pointed out that the duty to preserve the legacies of the 9/11 heroes becomes even greater, as nearly a quarter of Americans alive today were born after 9/11.

''We do know that America will always lead,'' Austin said. ''And we do know the only compass that can guide us through the storms ahead: It is our core values and the principles enshrined in our Constitution – liberty, rights, the rule of law and a fierce commitment to a government of the people, by the people and for the people. It is our job to defend the great experiment that is America to protect this exceptional Republic, body and soul. And to defend the American people and our democracy even when it's hard – especially when it's hard.''

President Joe Biden and first lady Dr. Jill Biden are expected to visit the Pentagon in the late afternoon Saturday to attend a wreath-laying ceremony.

“No matter how much time has passed, these commemorations bring everything painfully back as if you just got the news a few seconds ago," Biden said in a video address.

Biden is the fourth president to console the nation on the anniversary of September 11.