'I think of them': Safety Harbor man who worked at World Trade Center recalls heroic firefighters

Mike Fineo remembers Sept. 11, 2001, from his seat on the 25th floor of the North Tower of the World Trade Center. 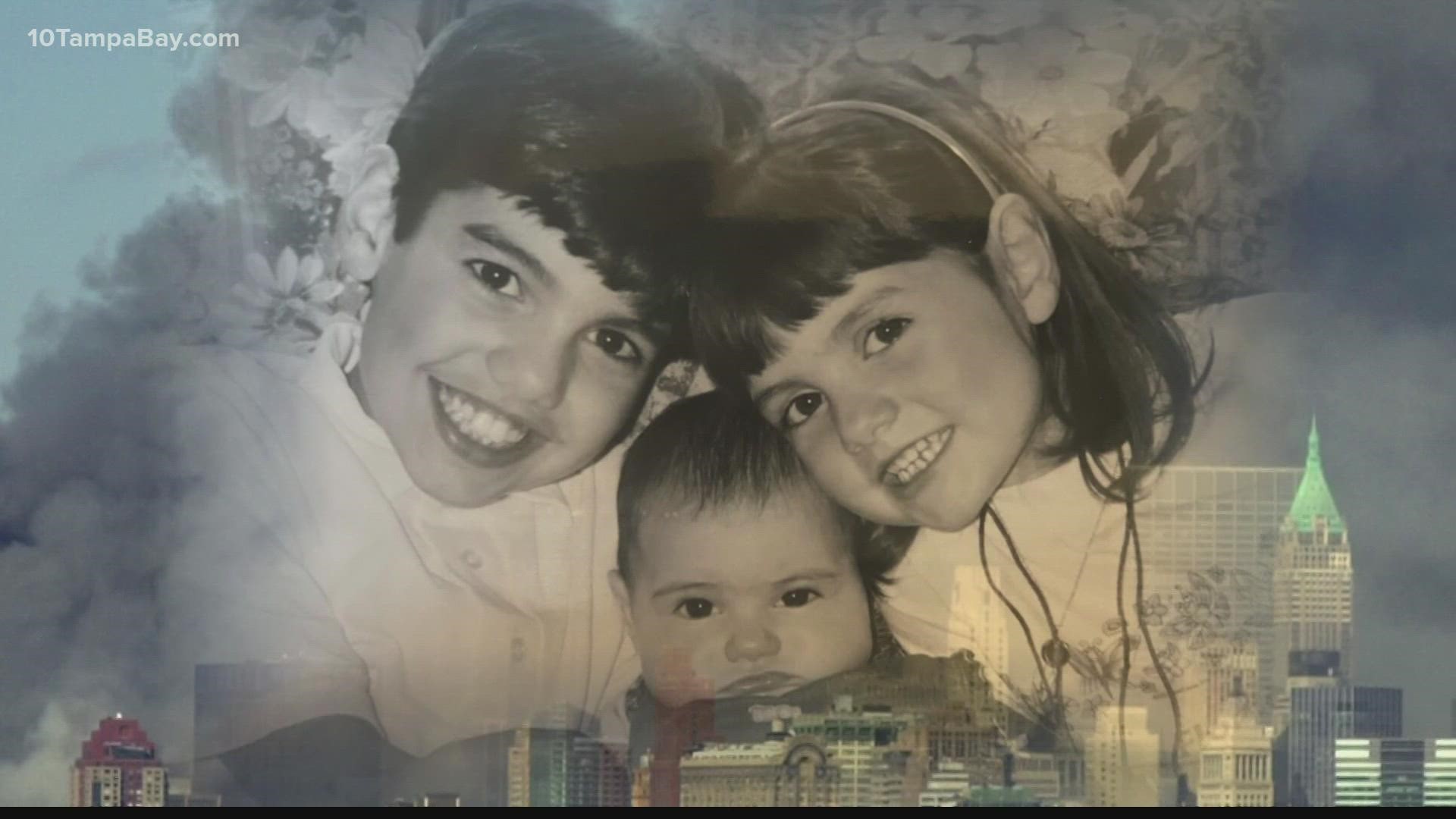 SAFETY HARBOR, Fla. — Sept. 11, 2001, was a day our nation promised we would never forget. Some of us have put that memory away. It’s too painful to remember. It’s too long ago. Some of us were not yet born.

It’s a day Mike Fineo, who lives in Safety Harbor, doesn't like to talk about. It’s painful. You can see the grief he’s carried with him for 20 years.

“I don’t like talking about it. But I will," he said. "Never forget. That’s the purpose."

He met 10 Investigates’ Courtney Robinson at the 9/11 Memorial at Curlew Hills Memory Gardens in Palm Harbor to share his story.

“We can't ever forget those that died that day. Right? I mean, we went to work, we didn't go to war. We weren't prepared for that. We'd never experienced anything like that,” he said.

He remembers the details. He remembers his ride into his office.  He worked as a money market manager for Garban Intercapital. His office was on the 25th floor of the north tower of the World Trade Center.  He remembers taking a morning walk for a cup of coffee, sitting down at this desk and calling customers.

“Typical as any other day, you know, nothing special about it. And then at 8:46 our tower got hit,” he said.

Fineo was knocked from his chair. Unsure of what happened, he was still answering calls. Eventually, he says someone came in and told everyone to leave. In the rush, he tripped. The force of the explosion had warped the floors. He later found out he had broken a bone in his knee and needed surgery. He never felt the pain.

He walked into the office kitchen and found a co-worker emptying milk and juice containers and filling them with water.

“He said, ‘Listen, I was here in ’93 when something like this happened.’ He handed me a gallon of water and a stack of napkins and put them under my arm and he said, ‘Take them into the stairwell and if it gets smoky just wet them and pass them out, it’ll filter the air.’”

Fineo put the napkins and water under his arm and made his way to the stairwell. There were too many people.

“That’s the first moment I started to panic, like, how are we going to get out of here?”

Another co-worker waved him to another a door that for years he thought was a closet. It was a smaller stairwell.

As he, his co-workers and hundreds of others made their way down he says no one knew what was happening.

“The crazy thing about it is everybody in the stairwell was pretty calm. You know there was a lot of lighthearted banter. Guys are talking about it’s a beautiful day, we’ll go play nine, come back tomorrow.”

At 9:03 a.m., Tower Two, also known as the South Tower, was hit. Fineo was in the stairwell on the 16th floor of the North Tower.

“We felt that. We heard it and that’s when the stairwell went silent and everybody knew this was no accident,” he said.

He remembers seeing the faces of the firefighters as they climbed the stairs. Fineo remembers pulling himself against the railing to make room for them to pass. His voice cracks, and tears fill his eyes.

“They were young. They were sweating. Their eyes were huge. They knew where they were going, but I don’t know if they ever made it out. And I think of them all the time,” he said.

He remembers making his way outside and the horrors that he saw when he finally looked up. He remembers watching the twin towers fall. Tower Two fell first. It was 9:59 a.m.

“By the grace of God we got on a ferry and I could not take my eyes off the towers and I remember looking up and we watched tower two go down and then you couldn’t see anything.”

He remembers taking a train with his boss to Franklin Lakes, New Jersey and from there finally getting through to his wife on Long Island. He remembers telling her that he was okay, and he would see her and their three young children again soon. His youngest daughter was only a baby.

“When we heard each other’s voices, we couldn’t even talk. And we just cried.”

He remembers the days, weeks and months that followed and the swell of pride. He remembers America coming together. He still has the cards of support sent to him by school children in North Dakota.

“We were all Americans and we felt that around the globe,” he said.

Twenty years later, he remembers living through an act of war. He’s watched as his children have grown up in a country at war and has felt the weight of a nation dividing and forgetting.

“We have to remember what happened 20 years ago and consider do we need to go through another catastrophe like 911 to become unified again as Americans? So, I’ll never forget. And I’ll make sure that you know I’ll do the best I can to make sure we never forget.”

2,753 people died in the attacks at the World Trade Center including the first responders who were there to help evacuate workers and save those trapped on higher floors.

If you would like to join Mike and others in remembering together in person, Curlew Hills Memory Gardens will hold a memorial service at 10 a.m. on Saturday, Sept. 11, 2021. Garrett Lindgren a retired FDNY & 9/11 first responder will share his story and Lee Greenwood will perform his song, “God Bless the USA.”

RELATED: 'If I'd stayed for one more coffee': Former FDNY firefighter pays 'Tribute to Heroes' as he reflects on 9/11