Real 'Come From Away' pilot, a Florida native, recalls 9/11 in Newfoundland

Beverley Bass is the first woman captain for American Airlines and was flying to Dallas on Sept. 11, 2001, when her plane was diverted to Gander, Newfoundland. 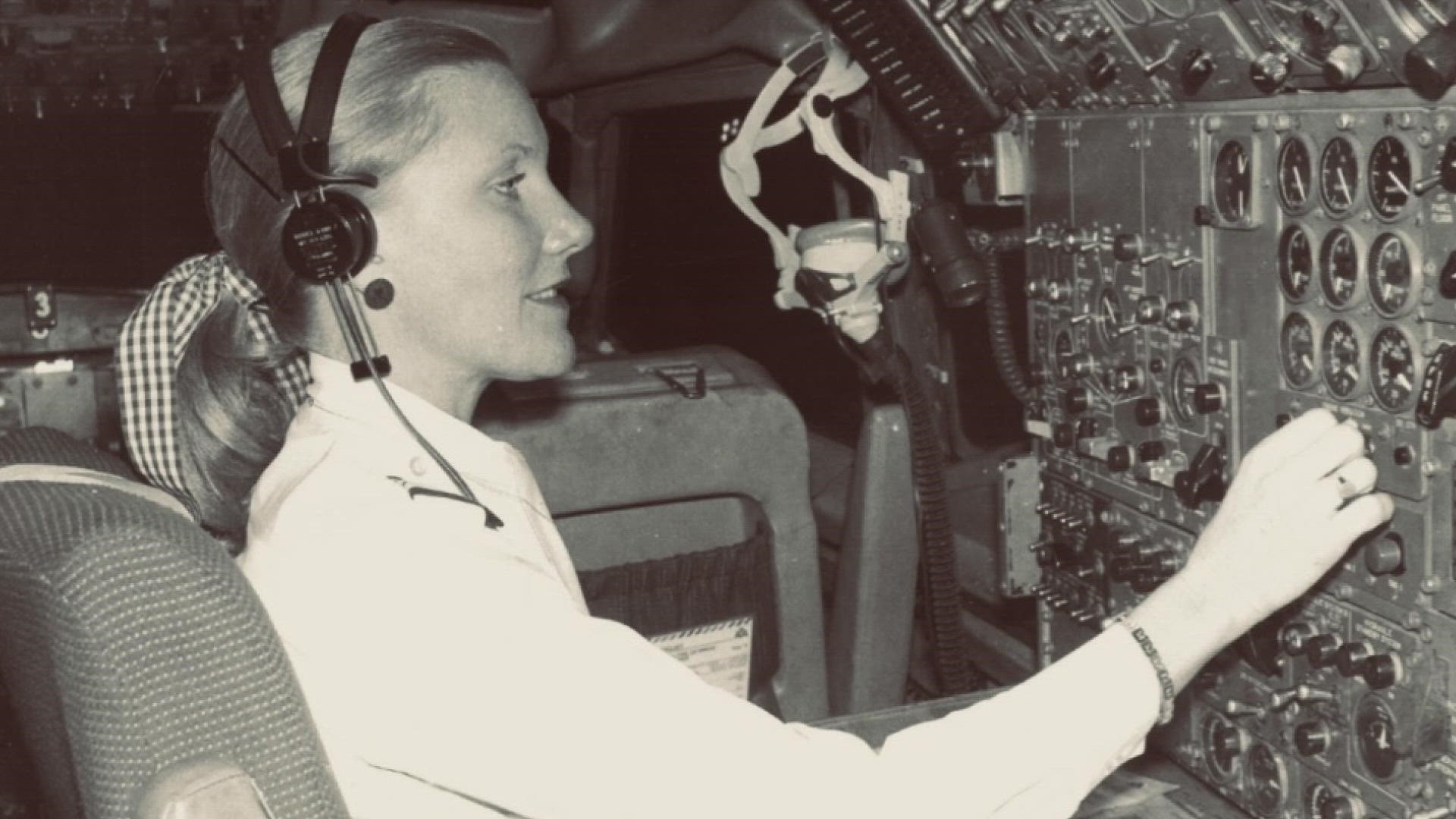 TAMPA, Fla. — Fort Meyers native Beverley Bass feels at home in the cockpit. She flew into history as the first woman captain of a commercial plane at American Airlines and only the third female pilot there.

“We were on the other side of the Atlantic at Paris’ Charles de Gaulle Airport and preparing for a 10-hour flight back to Dallas. We took off, it was an abnormally beautiful, cloudless day. It’s rare that you can cross the North Atlantic without a lot of cloud coverage, and that day was just magnificent,” Beverley described.

“We were right in the middle of the North Atlantic westbound, we had just finished our lunch, and we heard on our aircraft radios that one of the towers had been hit by an aircraft. Your first thought as an airliner, is it American? We had no idea who it was, and when they said the word terrorism, I was honestly so naïve. I thought terrorism was something that happened somewhere else in the world.”

Beverley and her co-pilot knew they would have to land somewhere else when New York airspace shut down, and then eventually U.S. airspace closed. They figured they would end up landing somewhere in Canada, like Montreal or Toronto.

“When we reached 50 degrees west longitude, which is where we come in contact with Gander on every normal north Atlantic crossing westbound, they called us and said, ‘American 49, land your plane immediately in Gander, Newfoundland,’” Beverley said. “That was not what we were thinking we were going to be doing, but we plugged it into the computer and went to Gander.”

Beverley’s plane was No. 36 out of the 38 “widebodies” to touch down that day in Gander.

“When we were on final approach, I looked out and it was just a sea of airplanes. I had never seen so many widebody airplanes parked on every piece of concrete they had,” Bass described.

Credit: Beverley Bass
Planes parked wherever they could after being diverted to Gander.

After getting parked, Canadian officials told Beverley and the rest of her plane they wouldn’t be able to get off until the next day. Beverley says they waited on the airplane for 28 hours, not knowing the details of what was happening in New York.

Some passengers had cell phones, making calls to home to find out what was happening in the states. However, with no way to charge phones, and certainly no airplane television, Beverley, her crew, and passengers were sitting and waiting.

“What we were able to listen to was the BBC on the aircraft's radios. We were able to get London’s version as to what was happening in the U.S., but that was it. That was our only contact with the outside world,” Beverley explained.

The next morning, all 7,000 crew and passengers were able to get off their planes, nearly doubling Gander’s population of 9,400. The people of Gander were just as shocked as anyone by what was unfolding on the news. So, they focused on the situation in front of them, helping these strangers who had come from away.

“We walked into the terminal, which was astounding because even though the airport was large, the runways are fabulous, the terminal itself is quite small, but it was lined with tables of hot food, snacks, fruit, dessert, brownies, everything you could think of,” Beverley said.

“It was evident to me that every stove in Gander had to be on all night long. They literally had enough food to feed every single passenger when we got off the airplane. They actually handed us a plastic bag, and it was a little like Halloween. You just went around the tables and threw whatever food in your bag that you wanted. That was probably the first time I had realized we had landed in a very unique place. I don’t know if that would have happened anywhere.”

Crews were spread across all 500 of Gander’s hotel rooms. Passengers were divvied up, staying in schools, churches, even homes, any space that could hold people.

“They had to use the school buses to get everybody off. The school bus drivers were on strike, but every single one of them came off in order to transport all of us. As many as 10 people were in people’s homes, and nobody spoke the same language. People were actually scattered throughout Gander and the surrounding communities within a two-hundred-mile radius,” Beverley said.

The kindness of the Ganderites didn’t stop there. Beverley says passengers were able to go to local stores, even Gander’s Walmart, and take anything they needed without paying.

“I remember one time the radio announcer, he said if you have any spare rolls of toilet paper, would you please bring them to the hockey center. It was like 30 minutes later he had to come back on and say stop bringing toilet paper, we don’t have room for any more! It was a call to duty that was like no other,” Beverley described.

For five days, Gander’s residents not only welcomed passengers and crew members with open arms, but they also showed immense compassion and generosity during one of the darkest times in American history. The thousands of stories of Gander’s kindness even led to a Broadway musical, "Come From Away."

Bass describes feeling a bit of “survivor’s guilt” having a wonderful stay in Gander while so many families back at home were suffering unimaginable pain.

“When I left Gander on Sept. 15, I remember looking to my crew and saying, ‘I just want the whole world to know about Gander, I want everybody to know how we were treated, so beautifully, when our country was suffering through the worst tragedy in American history,’” Beverley explained.

Yet, during those five days in Gander, life at home changed quickly.

“We had no idea what to expect when we got home. I think the most surprising thing to me was when my family, our families all met us at the airport with flowers, balloons, all the controllers said ‘Welcome home,’ it was very emotional," she said. "When we drove home, I was shocked to see every car had an American flag hanging out the window, there was an American flag in every front yard, and nobody had prepared me for that.”

As a pilot, Beverley says she puts herself in the situation of those pilots that lost their lives that day.

“You knew what it was like to be in the cockpit with your seatbelt on, with your shoulder harnesses on. The pilots were defenseless, they couldn’t even turn around and defend themselves,” she said.

Safety procedures on planes for both crew and passengers have evolved a lot, with many changes to ensure pilots in the cockpit are protected. Even though Beverley was flying to the U.S. that day, she says she wasn’t deterred from continuing to fly.

“I called crew scheduling and said I wanted to go on one of the first flights, and they said, ‘No, we think you should take a couple of days off,’” Beverley said. “So I took a few days off and then I flew again. I was never going to let the terrorists ruin what I love and spent a lifetime preparing for and doing.”

In the years following 9/11, fewer people were flying and the fear of a terrorist attack was growing. The aviation industry took a big hit, with many of the big players, like American Airlines, filing for bankruptcy.

Beverley took a 37% pay cut she never recovered from. She flew for seven years after 9/11, but with the threat of bankruptcy, her retirement was also at risk. So, she, along with 400 others retired early in 2008. She was one of the youngest to retire at the age of 56.

Today, Beverley is 69 years old, and she is still doing what she loves, flying a private jet around the world.

Credit: Beverley Bass
Beverley Bass still flies around the world, but now it's in a private jet.

Her daughter, Paige, wanted to follow in her mother’s footsteps as a pilot.

However, that dream started to fade after 9/11. Paige saw what her mother went through by taking a pay cut, and the general decline of the industry. She decided she was going to go to school to become a plastic surgeon.

Just as she was about to go to medical school, her dream to fly was sparked again.

“One day we were driving to lunch and she said, ‘You know, I think I might want to fly.’ So, I took her to the airport, got her a demo flight, and six weeks later she was pilot,” Beverley said.

Beverley is a very proud mom, sharing that her daughter has flown stars like Rihanna and even Maroon 5. However, she is most proud of her daughter’s latest achievement.

“She got hired by United, American, and Delta, and on Sept. 8, she will start training with American. The legacy lives on and I will be passing my wings down to her,” Beverley said.

Starting to fly with American just days before Sept. 11, Beverley does have concerns as any mom would.

“I flew many times after 9/11, on 9/11, and certainly the first year a lot of us were a little bit anxious. We wanted to get through that day without a repeat, and then subsequent years, it’s just kind of another day. This year worries me, our unrest in Afghanistan is troubling,” Beverley explained.

She also knows one thing for sure, there is still kindness in this world.

Just look at the people of Gander.