He thought he was doing the right thing, but also knew he might pay a price. 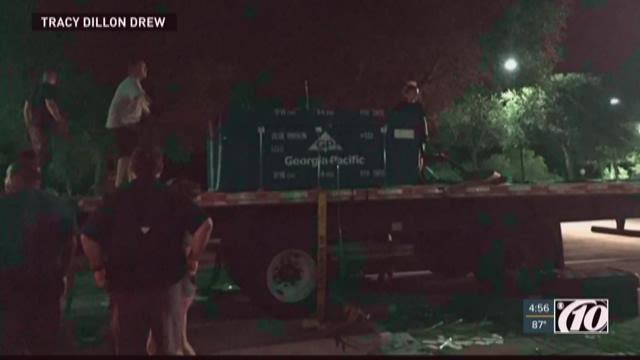 ZEPHYRHILLS, Fla. – A truck driver who gave away plywood to Zephyrhills residents who were desperate to prepare their homes for the arrival of Hurricane Irma was fired by his employer.

Tim McCrory was driving a load to the Home Depot in Zephyrhills last week when his truck suffered a blown tire. The fix took seven long hours, delaying McCrory’s arrival until Saturday morning.

But by then, that particular Home Depot was closed until the storm passed. Still, customers were arriving at the store, hoping it would be open so they could buy much-needed hurricane preparation supplies.

McCrory told 10News that he was raised to help people in need. “Being an American citizen, that’s what we do,” McCrory said, explaining what he did next.

McCroy started unloading the plywood on his trailer, giving it away for free to anyone who needed it. Then he turned his truck back north, believing he had done the right thing but with a feeling that he’d pay a price for his good deed.

Sure enough, McCrory said he got a call Monday from a supervisor at Western Express, the Nashville-based trucking company he worked for. McCrory was fired.

CEO Paul Wieck said he understood why McCrory did what he did, but he told 10News that the plywood on McCrory’s truck wasn’t his to give away.

“I understand his heart,” Wieck said. “But the plywood belonged to our customer.”

Wieck didn’t confirm McCrory’s firing, only promising to check on the driver’s status with the company and call 10News back later. By late afternoon Wednesday, Wieck had not responded to follow up phone calls.

Enter Tracy Dillon Drew, a Zephyrhills woman who was one of the many people who were able to protect their homes with wood given away by McCrory. She had struck up a conversation with McCrory on Saturday morning. The two exchanged numbers and talked that night, with McCrory concerned that Drew and her husband had successfully installed plywood before Irma arrived.

Hearing later that McCrory had been fired for giving away the plywood, Drew launched a GoFundMe campaign.

McCrory is back home in Western Massachusetts. On the phone Wednesday, he remained certain that what he did was the right thing and he’d do it again. He’s been in regular touch with Drew.

If you’d like to support the GoFundMe, the online link is: https://www.gofundme.com/support-tim-mcrory