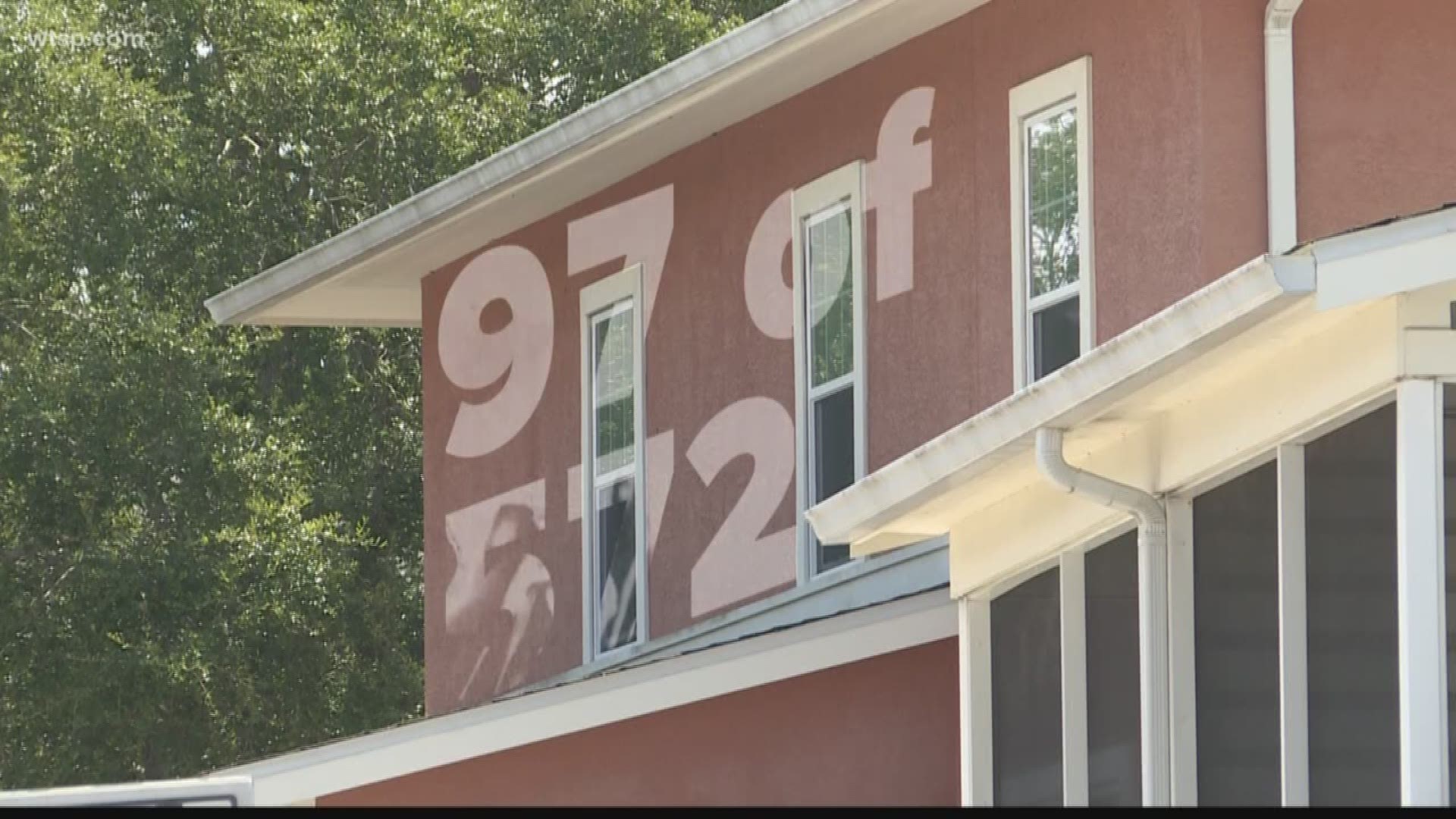 MACDILL AIR FORCE BASE, Tampa — The pictures from multiple families show the mold in their homes on base. The photos show mold inside of walls, under floorboards and in HVAC units.

Several military families have shared their stories with 10Investigates and claim they unknowingly lived in homes filled with mold and trying to fix the problem has been a battle with the company that handles maintenance for housing.

10Investigates also spoke with the man who is checking that the mold remediation happening on base is being done properly.

RELATED: Think your home has mold? Here's what to do

The Air Force does not manage or own housing on MacDill Air Force Base. A private company built and owns the residential project, known as Harbor Bay.

After 10Investigates’ report aired on November 11th, the President of Michaels Management Services reached out to 10Investigates.

“The Air Force is not responsible for any of this. When people are pointing fingers at someone for maintenance issues, they’re pointing at us and they’re right,” said Ron Hansen.

Hansen told 10Investigates in February, July and before the investigation aired in November that since becoming aware of issues of mold and other problems it has worked to remediate mold and any other housing problems military families face.

When asked if Michaels takes responsibility for the mold, Hansen said, “I’d rather not answer that.”

Credit: Provided Photo
Jenny Genrich and her husband who serves in the U.S. Military

The Genrichs story began in late August 2018. The couple moved from Fort Bragg, North Carolina, to Tampa and chose to live in housing on MacDill Air Force Base. They were excited for a new assignment and to live on base surrounded by the waters of Tampa Bay.

“It was absolutely stunning, and we were very, very happy the first three weeks that we were there. We were ecstatic,” said military spouse, Jenny Genrich.

Genrich says the newness wore off within three weeks because her husband “became symptomatic.”

She says her 36-year-old husband began having headaches, brain fog and trouble breathing. Doctors didn’t know what was wrong.

“That’s when you begin to realize that this might be what’s making you sick and you’ve lived in this home since August,” Genrich said.

Jenny Genrich says the air conditioning unit in their home started leaking. Documents show she reported the leak to maintenance with Harbor Bay, and it was quickly fixed. Genrich, however, says nothing was done to remove areas that were exposed to water and moisture. Months went by and in early 2019, she began to suspect mold was growing and spreading. She reported it.

A mold remediation crew came in and began work. That exposed the extent of just how much of the house had mold.

“I was honestly shocked at what I was seeing. A little scared and a little shocked. I was seeing mold, what appeared to be mold to me, on the studs and subflooring and on pieces of sheetrock,” said Genrich.

In February 2019, a private doctor diagnosed her husband with “sick building syndrome.”

“We were scared that maybe he [Mr. Genrich] had a tumor or cancer or something was really wrong. Again, we didn’t know we had mold,” Genrich said.

Genrich says it impacted her husband’s career. He was medically profiled and could not deploy.

Natalie Khawam represents the Genrichs and other military families at MacDill Air Force Base.

“We have a bigger issue at hand, perhaps we have a national security issue, as the mold has now harmed our active-duty soldiers to the point where they can’t even deploy,” she said.

At the same time the Genrichs were dealing with mold, military families across the United States were reporting problems with privatized military housing. MacDill AFB seemed to be ground zero for mold concerns. The Air Force ordered a nationwide review of housing.

10Investigates also found an Air Force review showing the number one concern for top Air Force Leadership during base visits was “Mold was most common issue due to construction quality—moisture from rain, ﬂooding and leaks from HVAC and refrigerators.”

Jenny Genrich says it should be.

“The HVAC is what I believe caused all of these problems and if it had been properly cared for maybe in the beginning, before we moved in, then maybe none of this would’ve ever happened,” she said.

Harbor Bay management immediately began addressing reports of mold; and according to Ron Hansen, regardless of whether a home tested positive for mold, remediation work was done.

The Genrich’s home was remediated in March. A report shows the remediation was complete, and a test after the remediation found a “rare” level near the AC unit and the stairway. Mold expert and industrial hygienist, Steven Lipson, says “rare” levels of mold are common in all homes.

Lipson is the industrial hygienist checking that mold remediation was done correctly on MacDill AFB.

The Genrichs moved back into the house.

“We became symptomatic again, and the testing indicated otherwise, that there was still mold present in the home,” said Genrich.

She and her husband hired a company to test their home for mold. The company swabbed areas where work had been done and used the same lab used by Lipson and his company, NV5, Inc. The Genrich’s results showed mold.

They decided they were out.

It’s not over, and other families are dealing with it

“It was frustrating then, it’s frustrating now and I do get frustrated when I think about the fact that another family may have moved into that home and it may not have been properly remediated even after we left,” said Genrich.

A spokesperson for MacDill Air Force Base told 10Investigates: “Initial construction may be one of many factors that caused concern for mold issues in base housing, however all homes were built to Florida and National building codes as required by law.”

Ron Hansen told 10Investigates that construction quality has nothing to do with mold in homes saying, “Those are gorgeous high-quality homes. Those are good homes.”

Again, the United States Air Force and command at MacDill AFB are not responsible for getting rid of mold or managing private housing. That job belongs to Harbor Bay maintenance and the company Hansen oversees.

Since maintenance issues, including mold, became public the United States Air Force ordered a nationwide review and began working with families to make sure their complaints are addressed.

Who’s making sure the mold is gone?

In Florida, the company getting rid of the mold and the person who makes sure the mold was removed properly cannot be the same.

Michaels hired an industrial hygienist to check the work.

10Investigates found that man through documents certifying the work on homes including the Genrichs.

Steven Lipson is the vice president of occupational health, safety and environment services for NV5.

He says when it comes to experience with mold, there isn’t anyone in the state of Florida who has more. He’s done thousands of projects in the state.

10Investigates Courtney Robinson asked Lipson to talk about the work on MacDill Air Force Base.

When she asked Lipson if what he is seeing on MacDill AFB is anything different than what he sees in other homes or businesses across Tampa Bay, Lipson responded: “Again I really, I’m sorry, I really can’t talk about ongoing projects.”

Lipson did agree to talk in general about mold.

“I like to say there is no such thing as a mold problem. It’s a moisture problem. Mold is just what you get when you have one. Once it gets wet, mold will grow in about 72 hours in most circumstances,” said Lipson.

New construction can be a problem

“Oddly enough, mold is a fairly new thing. You never heard of it 50 years ago, and the reason for that is we constructed buildings differently 50 years ago. Most older homes might be constructed of concrete plaster and wood. Mold doesn’t grow well on any of those materials. What it does grow well on is cellulose-based things like drywall,” said Lipson.

Lipson said finding the moisture, water source or leak and immediately addressing it and drying out anything wet within 72 hours is the best thing you can do.

“Speed is the best of all things. When it comes to water intrusion and mold growth, the faster you react to it the cheaper it is, period,” said Lipson.

Jenny Genrich is from Arizona. She says, based her background, she knew nothing about mold.  She says had she, she would have pushed harder for maintenance to do more when the first noticed problems.

“In the end we ended up being the ones to suffer for that. This has really impacted our life and so yes I am upset about it and I think of these things to be addressed then families wouldn’t be put in the situations where they wouldn’t have to live in these situations,” she said.

Hansen told 10Investigates by phone that construction quality has nothing to do with mold in homes saying, “Those are gorgeous high-quality homes. Those are good homes.”

10Investigates reached back out to Hansen in November to confirm what families told them about new procedures when it comes to mold.

He confirmed that dehumidifiers are now in some homes with humidity issues, and the goal is to make the humidity level in those homes 50 percent.

He also says they’re providing a year’s worth of “upgraded air filters” to families with sensitivity to allergens like mold spores.

Hansen says in other communities, not the Harbor Bay community on MacDill, they are testing technology that kills mold spores. He says that includes ionization. If successful, they could implement this in other military housing communities.

He also walked 10Investigates through the new procedure that housing maintenance is supposed to follow when a family reports mold: First, they confirm mold is present. Second, the family is moved out of the home and into another space on MacDill. Third, the environmental team hired by Michaels will go in to remediate the mold. Finally, anything that needs to be replaced, such as flooring, is replaced.

10Investigates’ Courtney Robinson asked if they've received full incentive payments from the project owner, Clark Realty. Hansen says they have received portions. He says that is in part because of problems and complaints from families about maintenance issues.

He maintains that the teams on MacDill have always taken action and says as military families have become more aware of mold they are better able to address problems. He says when any work order comes in, even if it’s unrelated to water, employees check “hot spots.” Those include areas in the home where there is a water source and also where they’ve found mold growing in other homes on base.

You have power to change it

A spokesperson for MacDill Air Force Base says there are several things military families can do if they suspect mold or a moisture problem.

Second, download the “ActiveBuilding App.” You can do that before you even move into a home. The app allows you to see all open and past work orders for your home. You can also ask Harbor Bay if mold remediation was ever done on your unit.

Third, speak up. If you feel like the work isn’t being done in a timely manner or wasn’t done well, there is now an advocate on base for you. The “Government Housing Representative” was hired by the Air Force and is not employed by Harbor Bay. His office is in the housing management office.

You can also voice your concerns through the Resident Voice Council, a program established by the base commander, made up entirely of housing residents that ensures base leadership has full transparency on issues within base housing.