The campaign's eight suggested use of force policies are meant to reduce police violence. 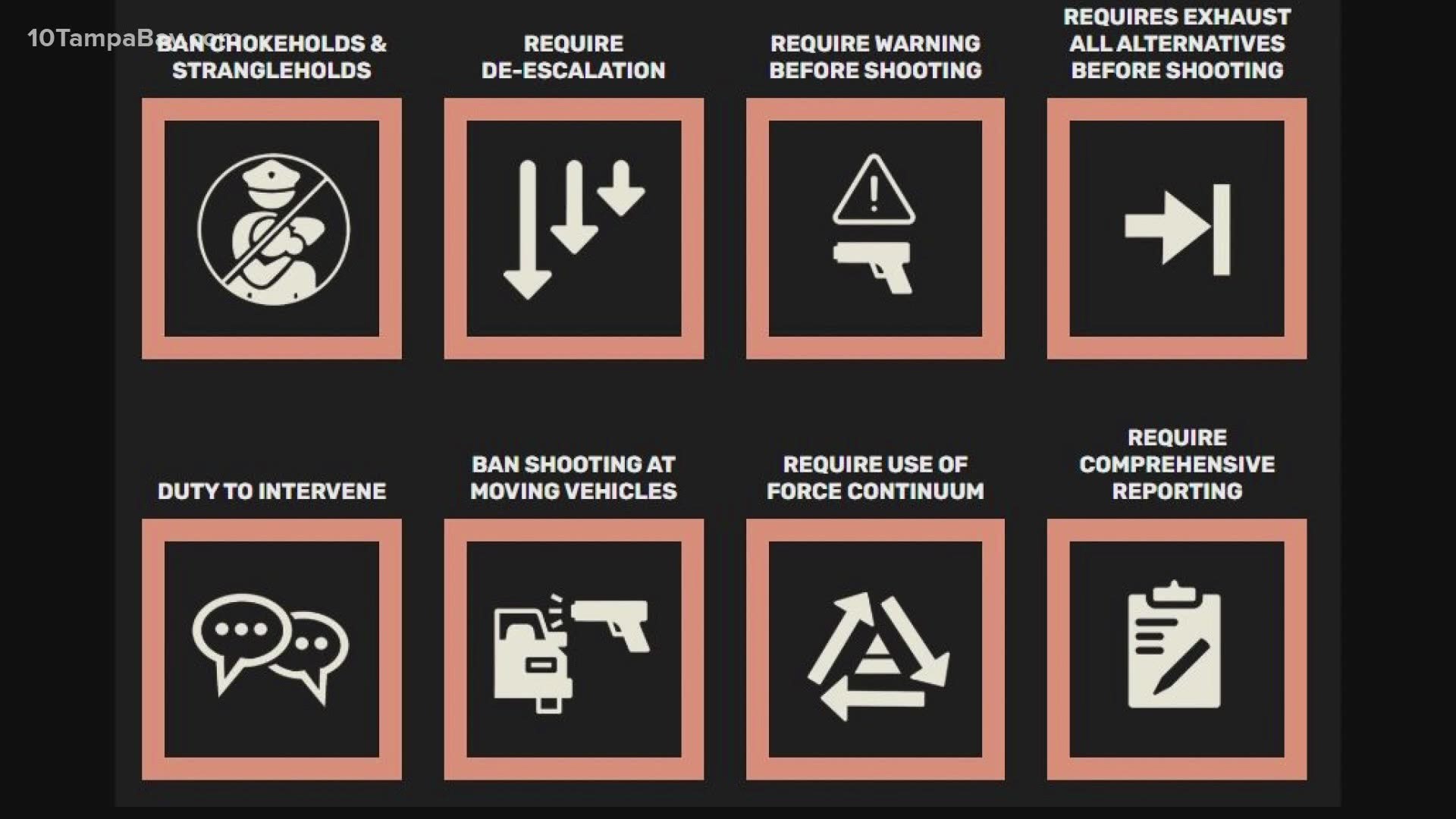 TAMPA, Fla. — You may remember #8CantWait trending on social media a few months ago.

The campaign’s eight suggested use of force policies are meant to reduce police violence.

More than two months ago, 10 Investigates started questioning a discrepancy that was confusing people pushing for police reform in Tampa.

On June 5, Mayor and former police chief Jane Castor claimed Tampa already had all eight of the policies suggested by 8 Can’t Wait.

“We have provided documentation on our website that outlines every policy, every procedure, the training, and the legal bulletins associated with all eight of those. And again, all of these policies, procedures, and training were in place way before I retired from the Tampa Police Department,” Castor said.

But at the time, 8 Can’t Wait’s website said Tampa only had one out of eight policies. Fast forward to this week when 8 Can’t Wait responded to our emails from early June about that discrepancy.

The Tampa Police Department emailed 10 Tampa Bay a statement when we asked about this new development:

“It is unfortunate that 8cantwait.org has not updated their website to reflect the Tampa Police Department meets the qualifiers suggested by their organization. Our agency has made this information as transparent as possible for review and it was provided directly to the 8cantwait organization. However, their website continues to reflect, incorrectly, that our agency meets only one of their self-established criteria. Their email to you states that criteria is met for five of their eight suggestions, again an incorrect statement,” Spokesperson Eddy Durkin said in an email.

So, 10 Investigates fact-checked the three policies in question:

8 Can’t Wait definition: “Require officers to de-escalate situations, where possible, by communicating with subjects, maintaining distance, and otherwise eliminating the need to use force.”

What 8 Can’t Wait says about TPD: “No. Policy does not require officers to use de-escalation whenever possible.”

What TPD says about this policy: “Tampa Police Department trains its officers in De-escalation techniques. The course is De-Escalation/Intervention & Decision making Scenario Training and officers have to demonstrate the ability to de-escalate their level of force as necessary.”

While TPD provided documentation that they train officers to “de-escalate their level of force as necessary,” the words “de-escalate” or “de-escalation” don’t appear anywhere in their 1,208 pages of Standard Operating Procedures. We were not able to find a written policy requiring de-escalation when possible.

8 Can’t Wait definition: “Ban officers from shooting at moving vehicles in all cases, which is regarded as a particularly dangerous and ineffective tactic. While some departments may restrict shooting at vehicles to particular situations, these loopholes allow for police to continue killing in situations that are all too common.”

What 8 Can’t Wait says about TPD: “No. Policy does not specify that an officer may not shoot at a moving vehicle for the sole purpose of disabling it and that officers must make every attempt to move out of the path of the vehicle. Policy states 'Shooting at or from a moving vehicle is prohibited in all instances except those which do not endanger innocent persons and are compelled by highly unusual or exigent circumstances such as where the subject is himself firing a gun from the vehicle or where the subject is using the vehicle in an offensive manner to strike persons or other vehicles and not simply using the vehicle to evade capture.'"

What TPD says about this policy: “Since 2014, SOP 537, Section V B(3) has prohibited shooting at moving vehicles and Legal Bulletin 2014-16 was distributed to officers to advise them of the change in policy and explain the reasons for the policy change which included prevention of unnecessary exposure to shooting situation.”

A 2014 policy update banned TPD officers from shooting at moving vehicles except in “highly unusual” circumstances, like when a suspect is hitting people with their vehicle. Since it doesn’t ban shooting at a moving vehicle in all cases, it doesn’t meet 8 Can’t Wait’s standard.

What 8 Can’t Wait says about TPD: “No. Officers are not required to report when they point a firearm at a civilian.”

TPD’S Manual of Regulations (MOR) does require officers to report when they point a weapon. When 10 Investigates showed 8 Can’t Wait’s spokesperson that regulation on Friday, she agreed TPD satisfies the campaign’s standard for comprehensive reporting after all. She said 8 Can’t Wait will update its website to reflect that TPD meets six of eight suggested policies.