Evictions continue in the midst of COVID-19 pandemic

Service industry workers reached out to 10Investigates for help. 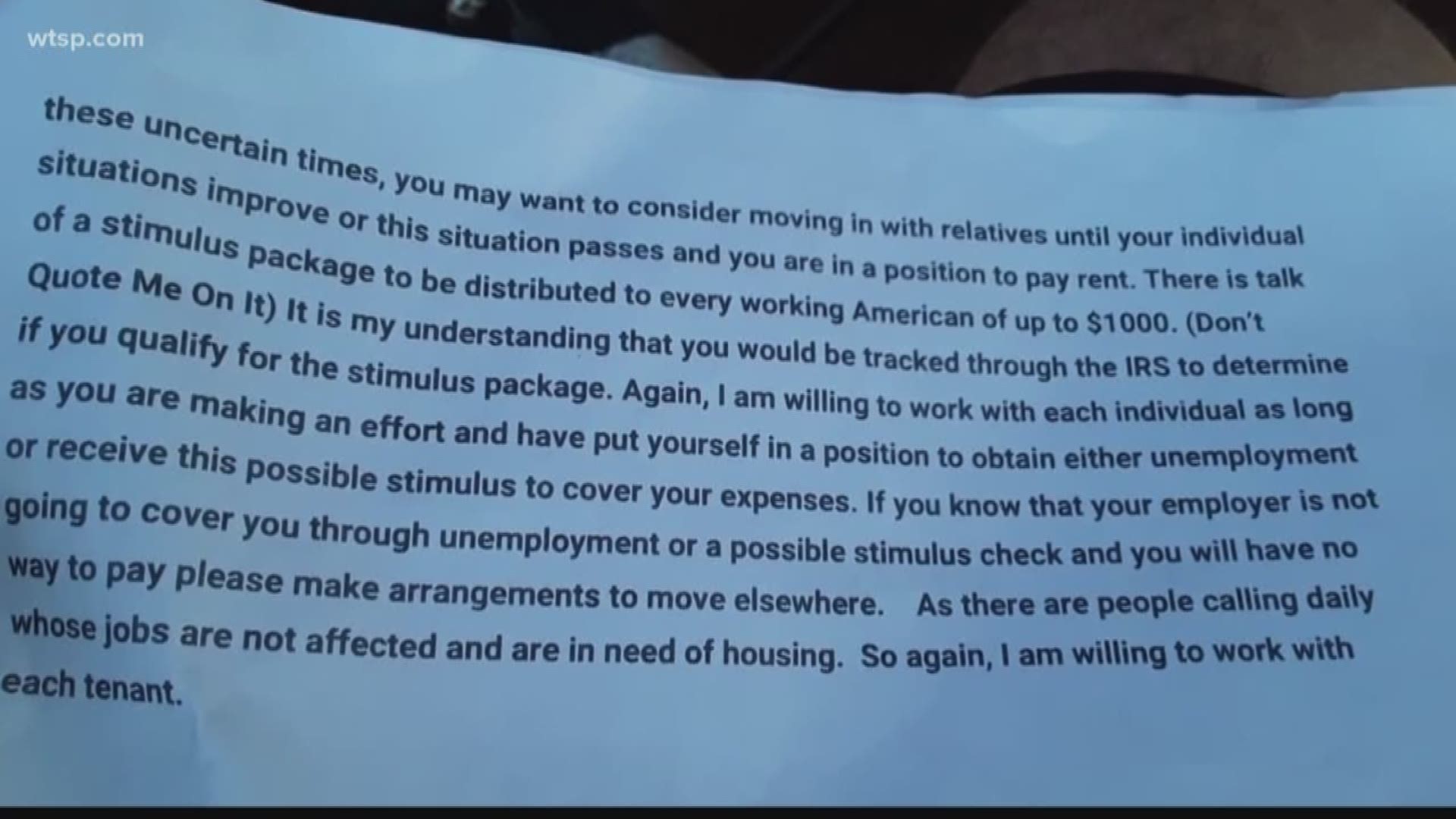 ST. PETERSBURG, Fla. — We’ve all been told to stay home to beat this virus but for some, home may not even be an option anymore.

Many who have lost their jobs because of COVID-19 coronavirus are now being evicted from their homes because they can’t afford to pay their rent.

“It's just crazy that this all can happen at once to so many people,” Sean, a former bartender, told 10Investigates.

“Quite honestly I’m just worried right now about rent and to buy food,” he said.

Last week, he received this letter from his landlord letting tenants know they may want to move in with relatives if they aren’t able to pay rent. Sean says that’s just not an option for him.

“My father is coming off of esophageal cancer and is locked down in his house,” he explained.

He isn’t alone. We’re told at least 10 other residents rent from the same place he does in the city of St. Petersburg.

10Investigates reached out to St. Petersburg Mayor Rick Kriseman’s office. His spokesperson told us in an email that evictions are the sheriff's jurisdiction, and the sheriff has said he won't halt them.

"We can try to find someone, Lauren, but evictions is really the Sheriff's jurisdiction, and he has said he won't halt them," spokesman Benjamin Kirby told 10News. "Mayor Kriseman talked to Chief Judge Rondolino about this, too, and the Judge indicated they would not take any action.

"The mayor thinks we need statewide leadership on this."

Pinellas County Sheriff, Bob Gualtieri was asked about this by county commissioners at a Board meeting on March 19, 2020.

The sheriff did say he understands the concerns.

He added that the department will try to work with people who are in quarantine.

“If it’s an address that is someone under monitoring by the Department of Health or on a 14-day quarantine then we will go back to the court and see if we can hold off."

Pinellas County is not the only county in the Tampa Bay area still evicting residents. Tenants in other counties have reached out, too.

10Investigates also received an email from residents in Bradenton who received this eviction letter which states: “you think we can’t file for eviction that is simply not true.”

We reached out to all the counties in the Tampa Bay area. Hillsborough, Hernando and Citrus counties are the only counties that have halted eviction. Hardee County is not taking any new eviction orders, but they are carrying out old ones.

“It's a difficult, uncertain time that we've never been through,” Sean told 10 Investigates.

He, like so many others in our area and across the state, have had their lives turned upside down after being laid off unexpectedly. He says they need help now.

“Absolutely 100 percent we need help," Sean said. "You know, if there's only one person that can make a decision in Florida, then the governor needs to do it if it's not going to come from higher than that.”

Kriseman agrees and says they need statewide leadership on this.

The governor did say last week in a news conference he would consider stopping evictions. We reached out to his office multiple times about this. His staff says they will get back to us but we’re still waiting on a response.

10Investigates Jennifer Titus did speak with Sen. Rick Scott, a former governor of Florida, who says the recent stimulus bill that passed does halt evictions for 60 days.