A Hillsborough County family was calling for help. Instead, their loved one got hurt.

A gap in police training may be leading to an increase in arrests during medical emergencies. 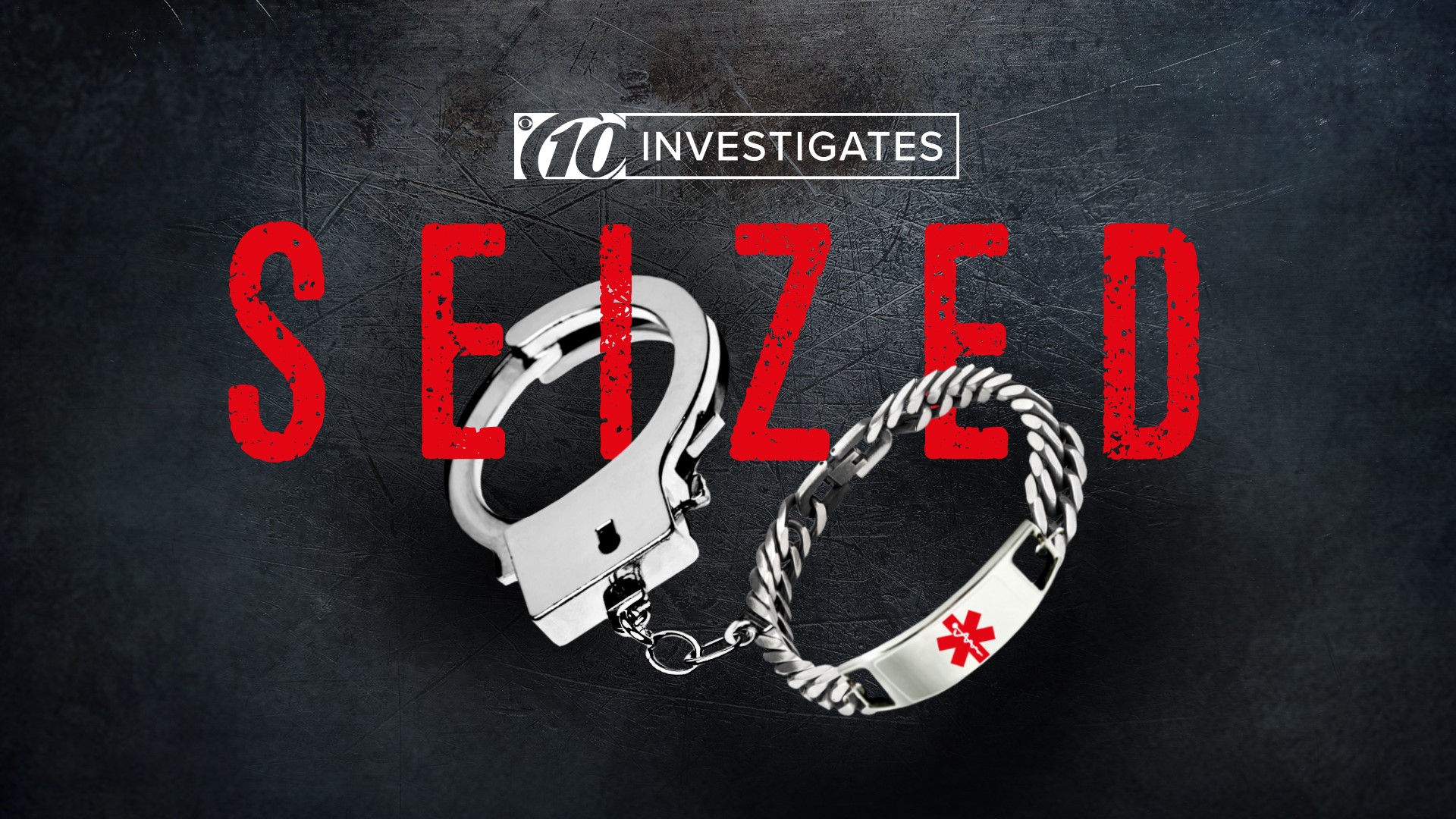 When Jeff Rutter was diagnosed with seizures at 57 years old, his life changed.

He could no longer drive because of the risk of having a seizure behind the wheel.

He had to move in with his parents.

He said he doesn’t remember what happened that night. He only knows what was reported in Hillsborough County Sheriff’s Office reports.

His stepmother called 911 for help.

“My son is having a second seizure,” Susan Rutter told 911.

“He’s having a seizure? Who’s yelling in the background?” the operator asked her.

“Him. He gets very loud,” said Susan Rutter.

Although Rutter’s stepmother told 911 he was having a seizure, the 911 dispatcher told both officers they were responding to a domestic violence call.

Once inside, Hillsborough County Sheriff’s Office reports said Rutter tried to hit and kick the deputies.

“I was having a seizure. I didn’t know what was going on,” Rutter told 10Investigates’ Jenna Bourne.

In the kitchen, one deputy wrote he grabbed Rutter by the head and took him to the ground with a leg sweep.

“Apparently, they shot me with a TASER too, and I don’t remember that,” said Rutter.

His father Richard Rutter could only watch helplessly in his own home.

“I kept trying to tell them that he was having a seizure. They were just so adamant that he was on drugs. And right here is where they wrestled onto the floor. They were, all three of them, fighting here in the hallway. And this is where one of the officers, something on his belt scraped the wall right here,” said Richard Rutter, pointing to a long black scuff on the wall.

Credit: WTSP
One of the deputy's belts scraped the wall, leaving this scuff mark.

Richard's son Jeff was taken to the hospital, where he was treated for a dislocated elbow, an injury he’s still being treated for three years later.

Jeff was later booked into jail.

Two years after that arrest, Jeff Rutter had another seizure.

This time, his neighbor called 911.

When deputies found Rutter, they said he threatened and tried to hit them.

They shocked him with a TASER and restrained him on the ground while he flailed in the street, leaving gashes on his face.

“Eight policemen had him on the ground over there. He was battling them, all eight,” said Richard Rutter.

Rutter was again taken to the hospital, then booked into jail.

But there’s something the deputies didn’t know: Rutter has been diagnosed with postictal psychosis, a condition that causes some people with epilepsy to act out after seizures.

“Patients can really act psychotic. They have delusions. They are cut from reality and have all types of inappropriate behaviors,” Dr. Selim Benbadis told Jenna Bourne.

Benbadis is a professor and Director of the Comprehensive Epilepsy Program at the University of South Florida and Tampa General Hospital.

“It can be hallucinations. It can be violent acts, sometimes. It can be completely inappropriate behaviors that do not reflect their normal personality,” Benbadis explained to 10Investigates.

Benbadis said patients with postictal psychosis are unaware that they’re acting out and are not in control of their actions.

Colonel Kyle Robinson is the head of the Department of Patrol Services at the Hillsborough County Sheriff’s Office, the agency that arrested Rutter.

Robinson said he does not think any of the deputies involved in either of Jeff Rutter’s arrests should have done anything differently.

“I’m empathetic to this family. They’re in tough times,” said Robinson. “But to ask a deputy sheriff to make that assessment as soon as he puts his car in park and gets out of the car and tries to decipher what’s going on there, it’s not a reality.”

The Epilepsy Foundation says about 3.4 million people have epilepsy in the U.S. and postictal psychosis likely affects 6-10 percent of them.

10Investigates found similar cases across the country of officers mistaking epileptics' outbursts as a reaction to drugs.

In 2015, six Glassboro, New Jersey, police body cameras captured the arrest of Taharqa Dean, who was tackled, restrained and handcuffed after he tried to escape an ambulance following a seizure.

According to Dean’s lawsuit, which is currently open, Dean suffered rotator cuff injuries, nerve damage in his wrists, bulging disks in his neck, along with back and head trauma from the scuffle.

In 2018, surveillance and cellphone video showed two Indianapolis Metropolitan Police officers tackle epileptic Christopher Knox after a seizure in a convenience store, repeatedly kneeing Knox on the ground as he cried out in pain.

Knox’s father said the officers also shocked his son with a TASER.

In Republic, Missouri, police shot Destry Meikle to death in 2016 after he crashed his car during a seizure.

An officer said Meikle tried to run him over. His family settled with the city last year.

In 2012, Macadam Mason died after Vermont State Police fatally shocked him in the chest with a TASER after a seizure. His mother settled with police in August 2019.

Rutter and his family are afraid his next encounter with law enforcement could be fatal, too.

“Like my daughter said, she’s scared, she’s like, ‘Dad, next time, they might just shoot you,’” said Rutter. “It makes me sad, you know? She shouldn’t have to worry about that. But, oh well. Can’t do nothing about that right now except get the word out there.”

But the word has been out.

The federal government has known for nearly 30 years there’s a training gap.

A 1990 U.S. House Judiciary Committee report says, “persons who have epilepsy… are frequently inappropriately arrested and jailed because police officers have not received proper training...”

Both the Epilepsy Foundation and Epilepsy Florida tell 10Investigates they have no way to track how often people are being arrested during or after seizures.

Both organizations offer free training for officers but said very few law enforcement agencies take them up on it.

10Investigates checked with the Florida Department of Law Enforcement and found its basic recruit training mentions, “People experiencing a minor seizure often exhibit signs and symptoms that resemble drunkenness or drug overdose and, in some cases, may show signs of aggression. Do not make assumptions; investigate further before making an arrest.”

Recruits must also watch this video from the Epilepsy Foundation.

For many officers, it’s the only specific training on postictal psychosis they get.

Col. Robinson tells 10Investigates Hillsborough County would have trained the deputies who arrested Rutter in first aid for epilepsy and how to approach aggressive people; he confirmed specific training about potentially violent tendencies after seizures is not included.

“No, but during the 770 hours of training, there’s much to cover,” said Robinson.

10Investigates checked with more than 20 local law enforcement agencies and found only the Citrus County Sheriff’s Office reported providing additional training on how to handle combative people coming out of a seizure.

If you can't see the responses below, click here. 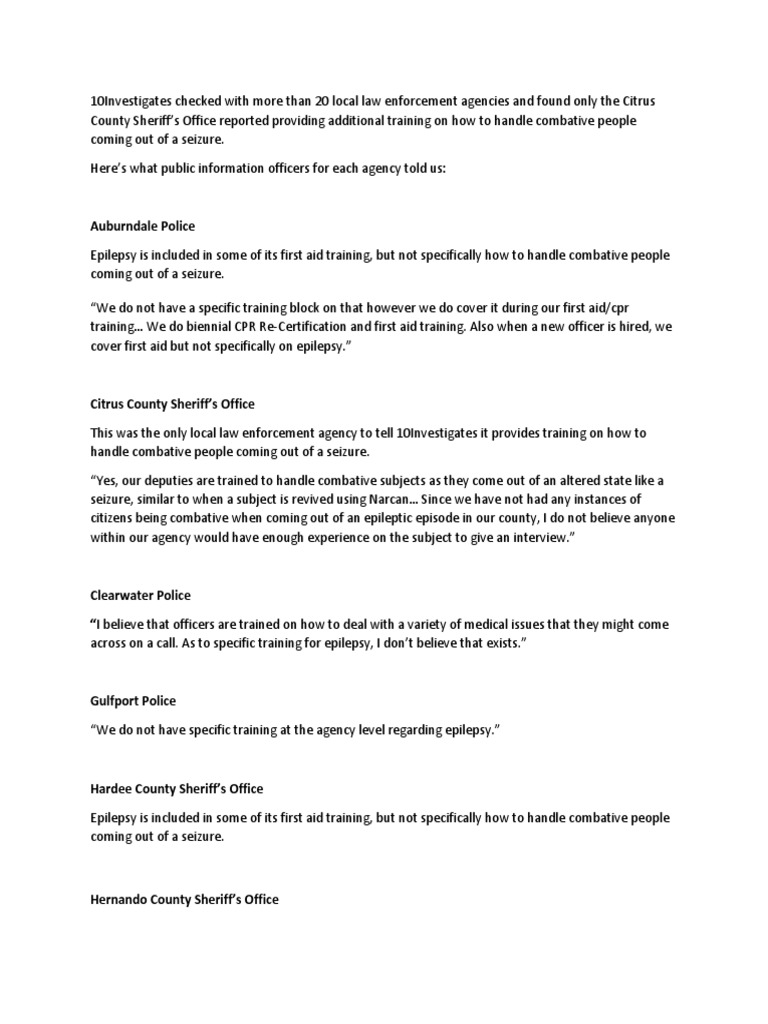 So, what are officers supposed to do if they encounter someone who might be acting out because of postictal psychosis?

The Epilepsy Foundation suggests they talk in a calm voice, avoid touching the person, contain them instead of restraining them, and recognize they may not be able to obey commands.

All the charges against Rutter were dropped, but his mug shots and his felony arrests are still public record.

A state senator says he wants to take action because of our 10Investigates report.

After seeing the story, Florida Senate Criminal Justice Committee Chair Keith Perry says it’s time to take another look at how Florida officers are being trained.

“I’m glad you guys are doing a story on it. I wouldn’t be aware of it if I didn’t see this,” said Senator Perry.

But Senator Perry says awareness isn’t enough; it’s time to start a conversation about how police are being trained to handle postictal psychosis, a condition that causes people to act out after seizures.

Senator Perry said he doesn’t think the way Florida officers are being trained on this issue is enough.

“I’ll be back up in Tallahassee in a couple of weeks and I’ll meet with my colleagues and we’ll talk about it,” said Perry. “How much training? What’s necessary? Look, I’m open to listening and talking to people who have expertise in this matter. And then, how do you implement something that’s effective?”