They want to know why he wasn't taken to a hospital. 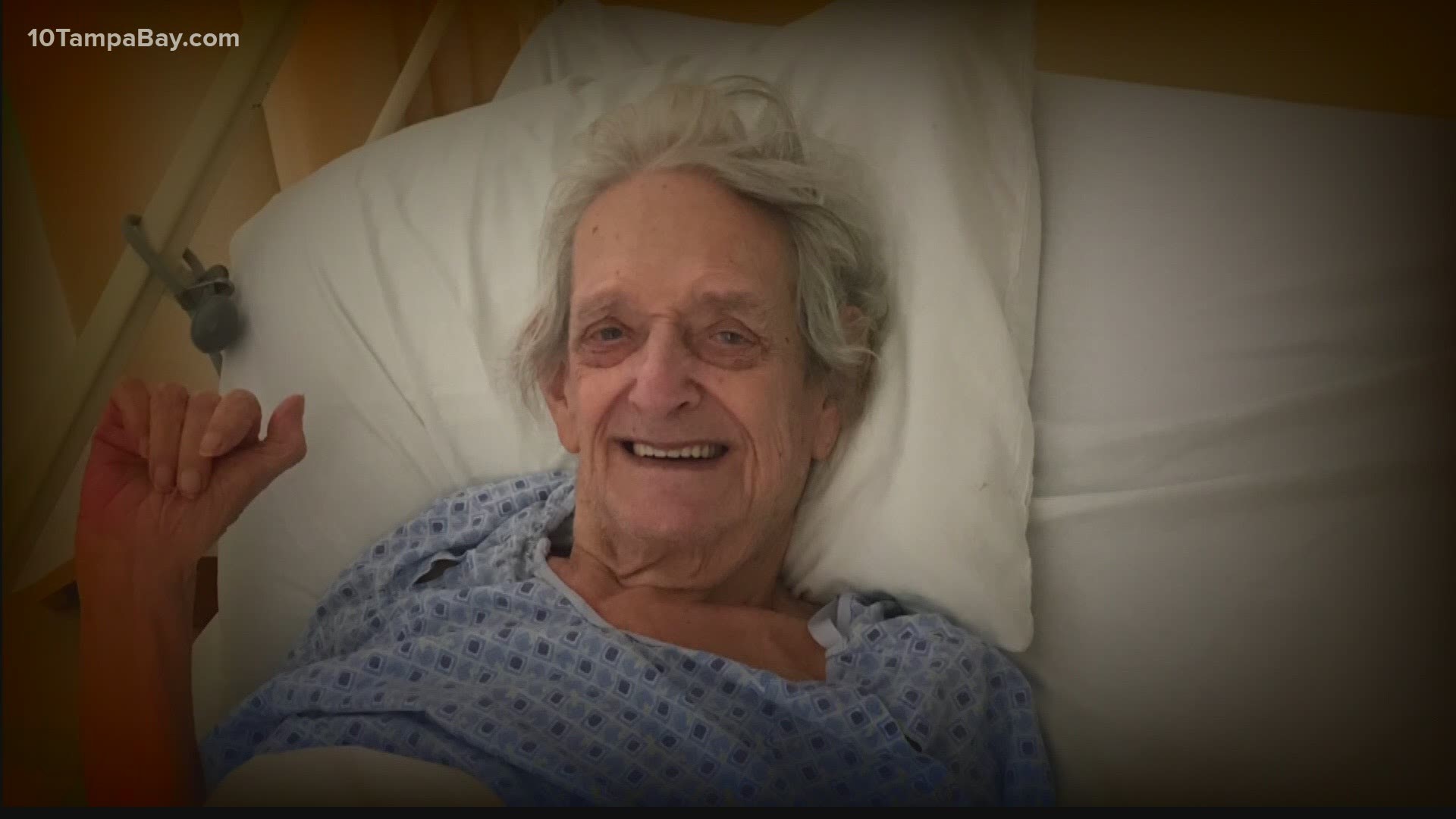 PASCO COUNTY, Fla. — While the median age of people testing positive for coronavirus over the last few months has gone down, nursing homes are still seeing outbreaks.

A local family says their father died after testing positive in a Bay Area facility. and they believe his life could've been saved if he was sent to the hospital.

"My father was 86 years old. He was living in a nursing home," Keith Blessing explained to 10 Investigates' Jennifer Titus.

"When the COVID happened, we were concerned about it, but it seemed like you know, with nobody visiting, he was going to be safe so when we got that phone call, we were just shocked that you know, this happened."

RELATED: Non-publicized White House report recommends 18 states should scale back reopening – Florida is one of them

Robert Blessing, a Korean War veteran, was no stranger to putting up a fight.

He had dementia and some other underlying issues.

"My dad's a fighter. He's a tough guy. I mean, they told him many times you're going to die. You know, since 1980s. Just keeps going going," said Keith.

Unfortunately, Robert would lose his final battle, with COVID-19.

"We basically watched him take his last breath, you know, outside through a window. I mean, it was it was, it was definitely, that's something you know, you want to want to see. I mean, he was in there helpless," Keith explained his father's last moments through tears.

The Blessing's don't think their dad was in the right place for his final fight.

"Once they found he was positive, they sent him to another facility that was supposed to be for the COVID patients that they can, you know, handle them in a separate wing. And from then on, it was just a nightmare."

Their father was never sent to a hospital. In June, he passed away.

"I ask the doctor like, what are you guys doing? Are you going to give me any medicine or me what's the course of action here? You know, and he brought up the thing about the DNR."

A DNR or a "Do Not Resuscitate" order is a medical order written by a doctor that instructs health care providers not to do CPR if a patient's heart stops beating. But, Robert's family says the DNR should have never stopped him from being sent to a hospital for care.

"I don't understand where the DNR has to do with any of that stuff."

10 Investigates reached out to Valerie Gutmann Koch, an assistant professor and co-director of the Institute for Health Law and Policy at the University of Houston Law Center, for her insight into the rules of a DNR.

"If there really was this blanket refusal to even consider transferring the patient to a hospital based on the DNR that does raise some red flags for me. That is a little more concerning," said Valerie.

She says as hospital resources become scarcer; she expects to hear more stories like this and says this is a good reminder to check on the paperwork that has been filed.

"And to have those things written down, documented and available, and also communicated to our loved ones. And there are lots of different things and different ways that we can do that within sort of the the legal rules of the state that we live in, as well as sort of the ethical and legal rules throughout the country."

The Blessing's say is just doesn't make sense and they want answers.

"He had a DNR like, you know, if he had a heart attack or you know, don't resuscitate me, you know, basically, you know, stuff like that. I didn't think that this stuff would fall already in ours, but they claim that it does. I just don't understand."

Robert's living will clearly gives permission to the family to decide whether he was to be transferred.

"I tried to call the CDC and the governor's office and email. I've gotten no responses from nobody."

We did get a response from the facility Robert was at. They won't discuss personal cases for privacy concerns.

They did tell us if a patient has a DNR, only the physician would determine whether hospital care was needed.

But if the patient has a DNR and a DNH, which means "Do Not Hospitalize", the patient would be cared for in the facility even if they had an emergency. The Blessing's say they did not have a DNH.

We reached out to AHCA, the Agency for Health Care Administration, to see if it has any response to claims that people with DNR's are not being hospitalized after testing positive with COVID-19.

We received this response:

"Anyone with concerns about an individual's care should immediately contact the Agency's Complaint Administration Unit at 1-888-419-3456 or use our online Licensed Health Care Facility Complaint Form. Not all patients who are COVID-positive require hospitalization."

So, we're hearing less about nursing homes than we did in the beginning of the pandemic, but 10 Investigates has been following the numbers continuously these past months.

COVID-19 deaths are still happening among this most vulnerable population.

As of July 17, according to the Department of Health, there have been 2,302 deaths among people who live or work in long-term care in Florida.

Of those, 616 or 27 percent, of the total long-term care deaths in the state have been in the 10 counties that make up Tampa Bay.

Hillsborough, Polk, Manatee and Sarasota Counties are in the top 10 counties in the state with the most long-term care deaths.

For context, the three southern Florida counties, Miami-Dade, Palm Beach and Broward, which are still in Phase 1 of opening, make up 44 percent of nursing home and long-term care deaths.

These numbers change daily. You can see the latest numbers here.