Why Florida police agencies are still so white

There are obstacles still standing in the way of a more diverse police force. 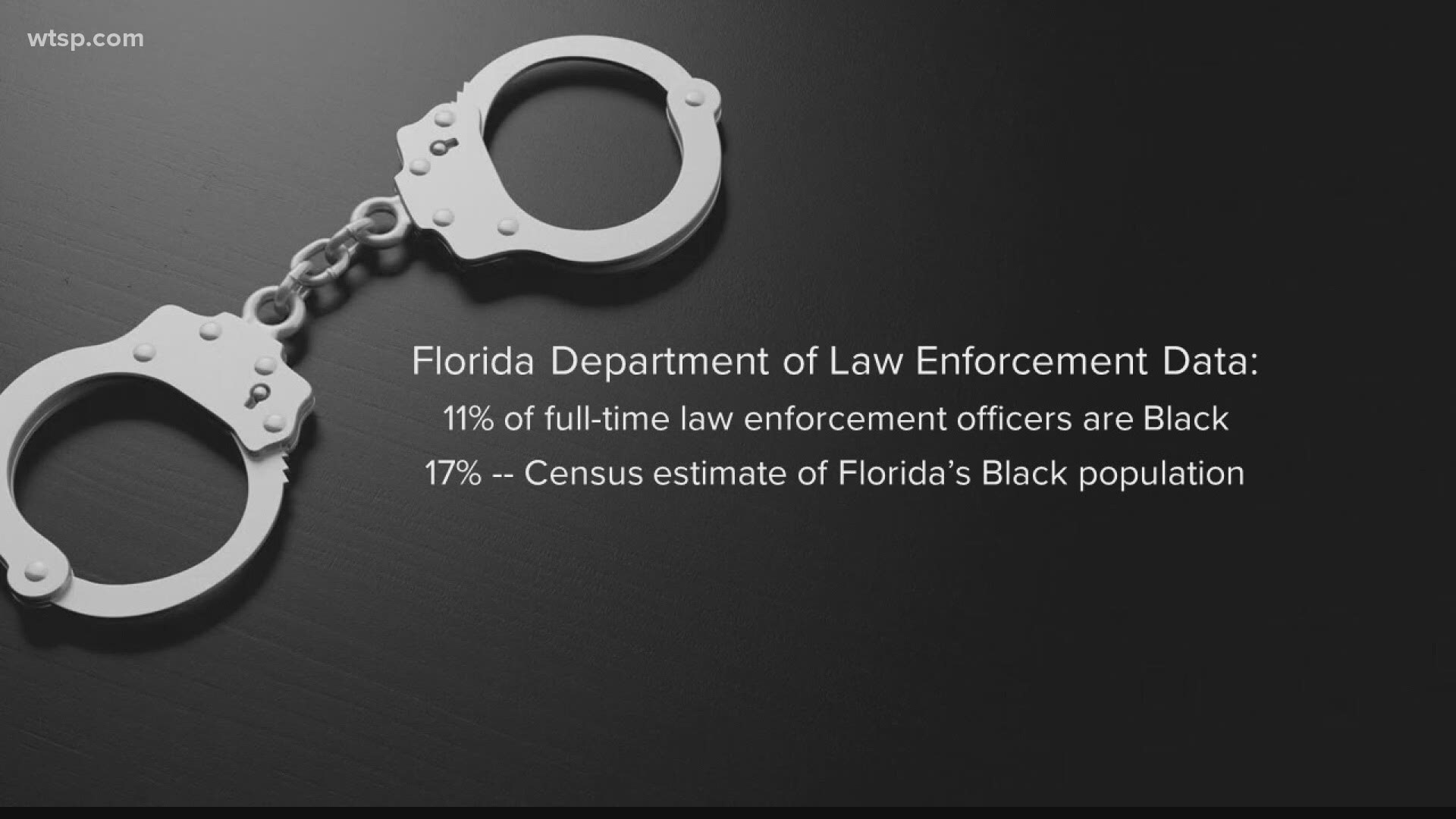 People of color have been sounding the alarm for years, but this particular case has put police back under the microscope.

According to the Florida Department of Law Enforcement’s data, 11 percent of full-time law enforcement officers in the state are Black.

Compare that to 17 percent, the Census estimate of Florida’s Black population last year.

According to 10 Investigates’ calculations of the Census estimates for our 10 counties, that matches exactly with the Tampa Bay area’s Black population: 12 percent.

But if you take a deeper dive, it varies by city and county.

A total of 119 of The Tampa Police Department’s 934 sworn employees are Black. That’s 13 percent.

Compare that to 24 percent of the city of Tampa’s population being Black.

The Pasco Sheriff’s Office has the highest percentage of Black sworn employees with 24 percent. That’s 85 out of 351.

So, how important is diversity in policing?

This report from the U.S. Department of Justice says increased diversity deepens trust in law enforcement, which is “essential to defusing tension, to solving crimes,” “enables officers to more effectively and safely perform their jobs,” and “can make law enforcement agencies more open to reform.”

10 Investigates read a bunch of research and, long story short, there doesn’t yet appear to be clear evidence that diversity decreases police violence. Researchers mostly agree more study is needed.

He’s referencing the Courageous 12, a dozen Black officers who sued the city of St. Pete in the 1960s.

"Black officers were not given the opportunity for promotions or any advanced training," Fearless Four member Frank Gray Jr. told 10 Tampa Bay in February.

Supporters of police reform have advocated for putting more people of color into leadership positions within law enforcement agencies—so they can make decisions to improve policing.

Decades after those local lawsuits, there are still obstacles standing in the way of diversity in law enforcement.

A big part of that is distrust of law enforcement within communities of color.

“Understanding the history of law enforcement in this country in the emergence of policing from forms of slave patrols. And the idea that we had a society which racialized a system of policing where Whites were entrusted to police African Americans or those of African descent. I think that if you don’t tap into the diversity of society, you create and continue that system,” said Bethune-Cookman University Justice and Political Studies Department Chair Dr. Kideste Yusef.

10 Investigates talked to two 2019 Criminal Justice grads from the historically Black Bethune-Cookman University, Enise Alcius and Kiefer Jefferson-Grimes, who both said they got pushback from their communities and families when they decided to go into law enforcement.

“They don’t see us as trying to make it better. They see it as joining the opposite side. We’re not on their side. And I see it as, if I don’t join, who’s going to join?” said Alcius.

“Coming up, no one in my family really even liked law enforcement. So, when I told everybody that, they were like, oh no, no, no, no, no,” said Jefferson-Grimes.

He didn’t let that hold him back. He’s supposed to start the law enforcement academy this summer.

“I’ve always seen myself in a uniform. It’s just something I want to do. And I feel like it’s a great career to actually help anyone and everyone around you,” said Jefferson-Grimes.

“Because they don’t feel like they would fit in. That’s what I think. I think that they see it as, they won’t get equal opportunities. Yes, you have on a badge. You wear a uniform. But you will never be equal with your counterparts. That’s what I hear,” said Alcius.

Steps in the right direction

For the past few years, Florida’s Historically Black Colleges and Universities have been collaborating with law enforcement to change that, putting a bigger priority on law enforcement recruitment events and roundtable forums on campus.

Pasco County Sheriff Chris Nocco tells 10 Investigates that making sure people of color have access to pursuing leadership roles is a priority for his agency.

About three years ago, he contracted with Greg Williams to help recruit.

Eighty-five of the 351 sworn employees at the Pasco Sheriff’s Office are Black -- that’s 24 percent.

Compare that to Pasco County’s Black population, which the Census estimates made up 6.5 percent of the county’s total population last year.

So, what can other agencies learn from Pasco about how to diversify?

Not only do they sponsor a certain number of recruits through the academy, they stand by them to make sure they stay on track.

10 Investigates asked if the Pasco Sheriff’s Office has noticed any measurable improvements since it began adding more diverse recruits, such as a decrease in violent confrontations.

Lead Public Information Officer Amanda Hunter said it’s hard to say for sure because, around the same time, they also started widespread use of body cameras, which Hunter said could also affect metrics like bias complaints.

And that’s the thing: Racial diversity in law enforcement is just one piece of the puzzle when it comes to police reform.

A report co-authored by two of the Bethune-Cookman department chairs you heard from earlier in this story, Dr. Kideste and Dr. Nelson, says, “Other needed reforms include routine implicit bias and de-escalation training of law enforcement, the charging of officers as appropriate when misconduct does occur, and the use of citizen review boards to address complaints and claims of misconduct.”