There are government workers across Florida abusing their access to your sensitive personal information in a state-run database. Most get a slap on the wrist. 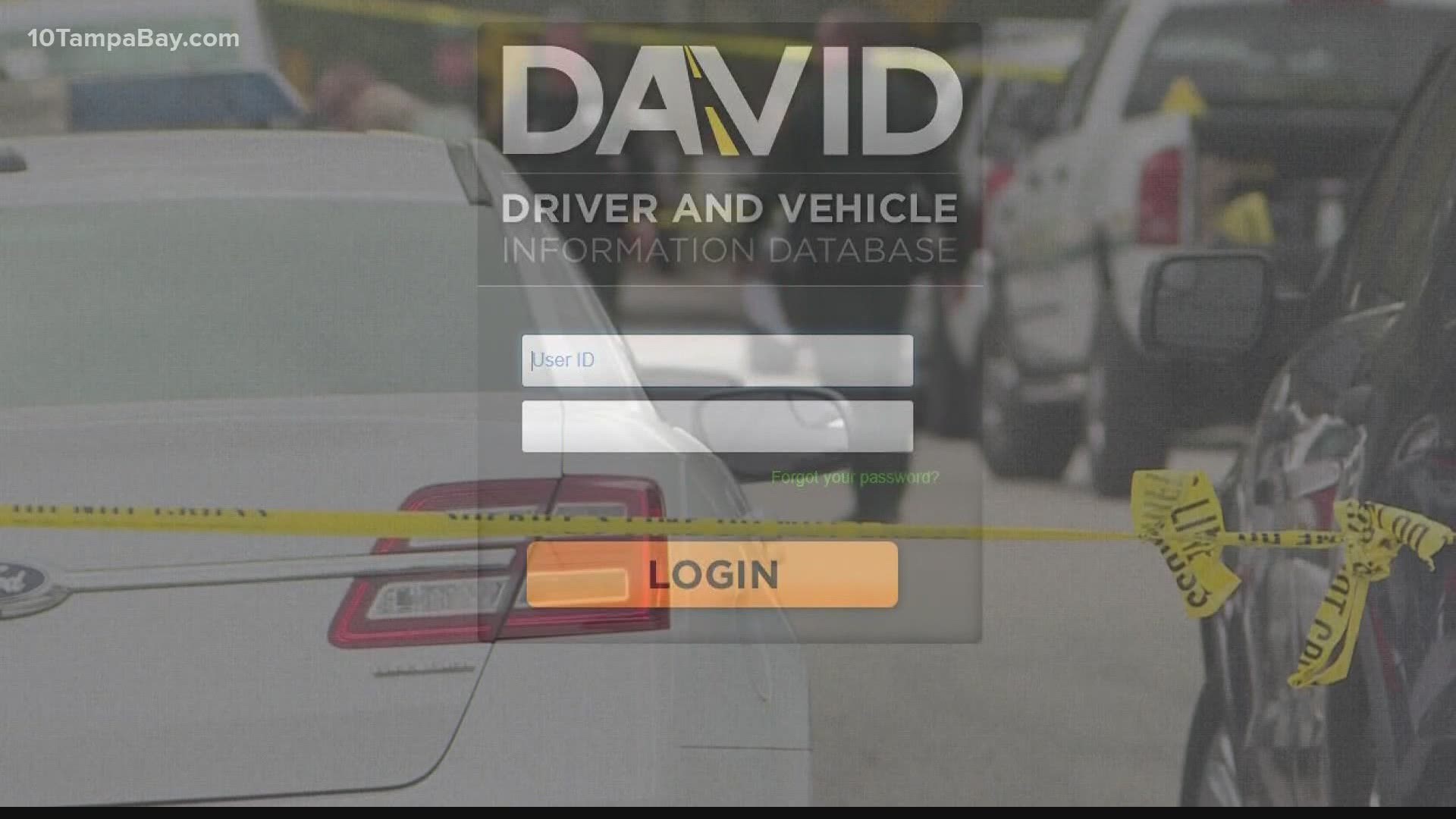 It’s not unusual to search for an ex on social media.

People get curious about what their former romantic partners look like now and what they’re up to.

But what happened to Eva Kennedy was different.

Decades later, her ex looked her up – not on Facebook, but in a confidential government database: Florida’s Driver And Vehicle Information Database, known as DAVID.

Government workers made more than 24 million searches on DAVID in 2019.

It’s meant to be a tool for government agencies and law enforcement officers to confirm information about Florida drivers, not a tool for romantic snooping.

“It’s kind of odd that he would just seek me out after 20-something years to find out where I’m at and what I’m doing,” said Kennedy.

She wasn’t the only one Willis admitted to looking up on DAVID while on the job as a child support program operations analyst at the Florida Department of Revenue in Jacksonville.

In a recorded interview with investigators, he says he also searched his ex-wife, looking for driver’s license photos.

“Gee, I wondered how a couple of people – my ex-wife, you know, well, her and a woman that I dated prior to her – you, know I wondered how they aged, basically, is what it was. And to be honest with you, I mean, I knew better. I hesitated,” Willis said in the May 3, 2019 recording.

Willis turned down 10 Investigates’ request for an interview.

“Out of curiosity I looked up the photos of an ex-girlfriend from 35 years ago, and an ex-wife from nearly 20 years ago simply to see how they had aged. I knew it was wrong to use DAVID for this purpose and admitted my lapse in judgment and that was the end of it. Please do not contact me again about this. There is nothing more to say,” said Willis in an email to 10 Investigates.

But Willis had access to more than just driver’s license photos.

Records 10 Investigates got from each agency through public records requests showed, with the exception of three people, they all got verbal or written counseling or no discipline at all.

At the Pasco Sheriff’s Office, a detective got a letter of counseling after using DAVID to search an activist who had asked for a copy of his internal affairs file.

Last year in Tampa Bay, one person got suspended for two days: A Temple Terrace dispatcher who used DAVID to find addresses for Christmas cards.

One person got fired: Port Richey Police dispatcher Christian Mercado. Police reports say Mercado used DAVID to look up a teen girl he was talking to and her parents.

In Lakeland, Police Officer Christopher Hoo resigned after he was accused of searching DAVID for the personal information of multiple young women he met while out on police calls.

One of those women told police she had a “sexual encounter” with Hoo after meeting him on duty.

Another was a “known prostitute,” according to a Lakeland Police report.

Lakeland Police Chief Ruben Garcia told 10 Investigates he would have fired Hoo if he had not resigned.

“He can tender his resignation up and to the point that I would have terminated him. But he knew that was inevitable, and that’s notated in the file,” said Garcia. “Here at this agency, we are not going to tolerate it. We take our public trust very serious. And anything we do to breach that trust, there has to be discipline.”

Hoo declined 10 Investigates’ request for an interview, through his attorney.

He is now being criminally prosecuted for misusing DAVID in Polk County court.

Although agencies reported more than 900 times since 2015 that their employees misused DAVID, State Attorney’s Offices in Florida tell us they only know of one other person who was criminally charged during that time: Another officer in Tampa Bay.

He pleaded guilty to using information from DAVID to track his ex-girlfriend and set multiple fires to the property of her and her friends in 2015.

FWC tells 10 Investigates the agency fired Butler after his arrest.

If someone was looking you up on DAVID for no good reason, you’d probably want to know.

But 10 Investigates found half the people whose information was accessed inappropriately by Tampa Bay law enforcement agencies last year were never notified.

It’s a failure that’s happening at the state level, too.

No victims were notified.

The Florida Department of Revenue told 10 Investigates it sent letters to notify Leonard Willis’ ex-girlfriend and ex-wife but didn’t have any documentation to prove it.

Both women told 10 Investigates they had no idea until we reached out.

“I don’t recall anything in the mail. Because I definitely would pay attention to that,” said Kennedy.

Florida law gives agencies an out when it comes to notifying victims of a data breach.

An agency doesn’t have to notify you if it “reasonably determines that the breach has not and will not likely result in identity theft or any other financial harm.”

“If they don’t notify them, most people may not ever know this has occurred. I’ve had cases before where people just thought it was some strange coincidence, and said, ‘Why is this person always where I’m going? How does he know I’m here? How does he know what kind of car I drive?’ And it was only much later that they found out that it was through abuse of the DAVID system,” said attorney Moses DeWitt.

“But they’re very difficult cases, unfortunately. The person who was kind of wronged never gets the damages they’re seeking, frankly,” said DeWitt.

Even if someone was looked up hundreds of times, DeWitt says a judge might only award them the minimum amount in damages.

“These lawsuits take years. They’re lengthy. They’re emotionally tolling, typically. And so, you could go through years of litigation only to receive $2,500,” said DeWitt.

The Florida Department of Highway Safety and Motor Vehicles, or HSMV, oversees DAVID.

The HSMV knew DAVID misuse was a problem years ago, so it began requiring more audits.

The agency also started requiring government workers who use DAVID to sign acknowledgments that they could face civil and criminal penalties for misuse.

But the state doesn’t know if those changes are working because they aren’t tracking how often government workers are misusing DAVID.

Agencies are required to report DAVID misuse to the HSMV, but the HSMV doesn’t use those reports to track the frequency of misuse.

Instead, the HSMV tells 10 Investigates its employees “review” the information and “take action if needed.”

The HSMV sent 10 Investigates spreadsheets and counts of how many times an agency has reported DAVID misuse since 2015, saying it created those spreadsheets specifically for our public records request.

We found those spreadsheets understated how often misuse happens.

They show how many times agencies report misuse to the state, but not how many instances of misuse are in each of those reports.

An agency might send the state one report, but there are 10 instances of misuse within that report.

The spreadsheet shows it as one report.

10 Investigates repeatedly asked for an interview with HSMV Executive Director Terry Rhodes, but she did not agree to talk to us.

According to the HSMV, 957 agencies currently have access to DAVID.

Each agency that uses DAVID has to sign an annual agreement to follow all rules and regulations since your personal information is protected under the federal Driver Privacy and Protection Act and Florida law.

Each agency must do quarterly quality control reviews.

The HSMV also does field audits at law enforcement agencies every two years.

“The DAVID system is a secure, multifaceted database that provides law enforcement and criminal justice officials critical driver and motor vehicle information. The department is clear in its expectations of agencies who request access to the DAVID system to educate and hold their employees accountable to ensure Floridian’s personal information is kept confidential in accordance with state and federal law,” said Keller in an email.

Kennedy says she wants people who abuse their access to face consequences.

“People just are invading privacy of other people,” said Kennedy. “Maybe they need to have a different job if they can’t handle having that type of – that level of security.”

If you suspect DAVID misuse, you can submit a complaint to the HSMV.

You can also or submit a public records request for DAVID searches of your name. To request your search history, email DAVIDPublicRecordRequest@flhsmv.gov and include your full name, driver's license number, and the time period you want to request.