One driver told 10Investigates she feels like she's out there on the front lines and is now afraid to hug her family for fear they'll get sick. 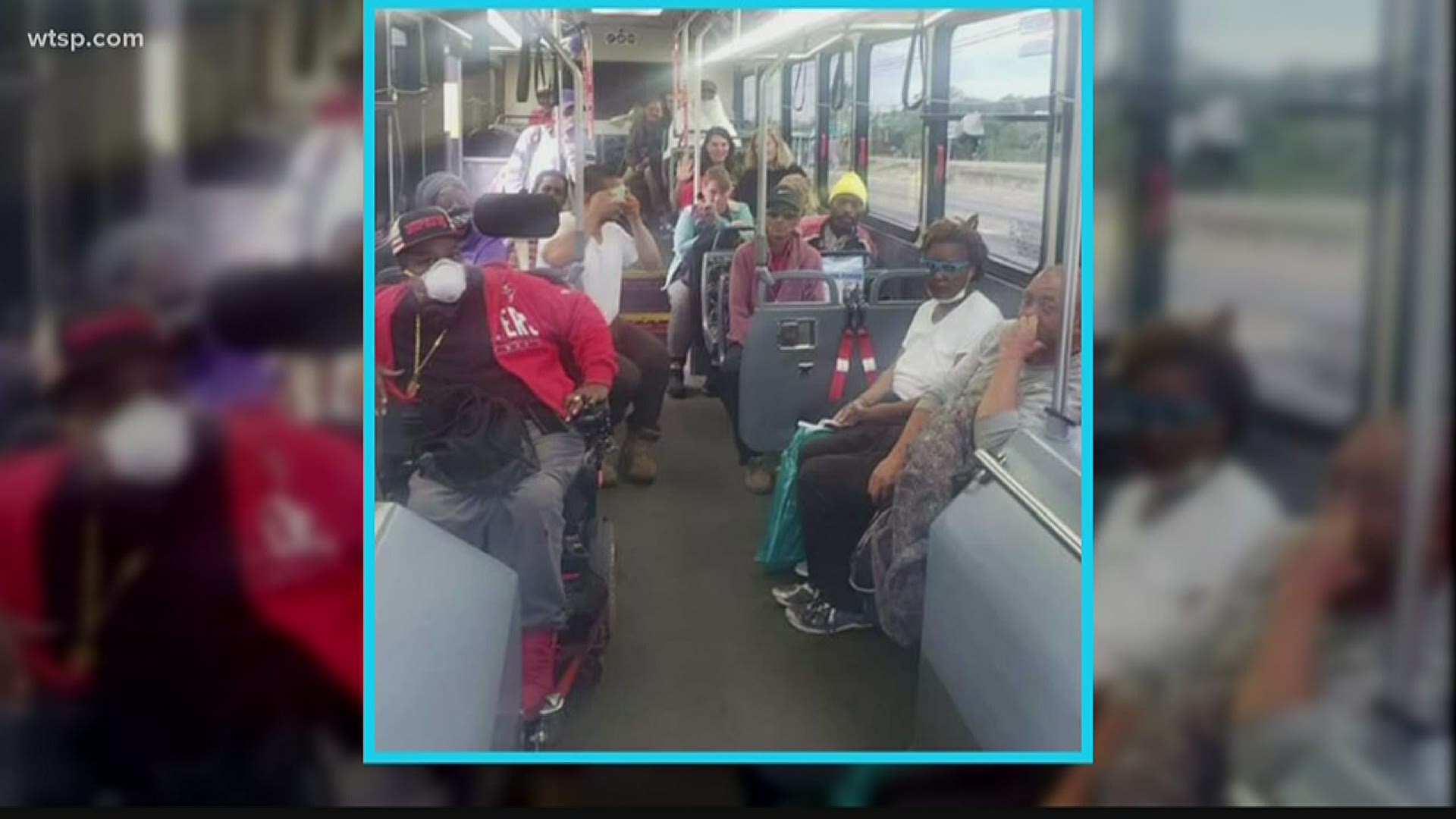 TAMPA, Fla. — This story is the first installment in our new series called: "What's Brewing?" It's investigative reporter Jenna Bourne's homemade look at the coronavirus pandemic. Click here to check out the series and subscribe to our new YouTube channel: The Deeper Dive.

Hillsborough County bus drivers tell 10Investigates they’re worried about their safety and the safety of their riders.

They say some Hillsborough Area Regional Transit buses are packed, and more needs to be done so people can socially distance.

Photos sent to 10Investigates by drivers and their union show crowded buses. Some riders are wearing face masks, but most are not.

One HART driver tested positive for COVID-19 this week.

Students and their families might be affected by crowded buses because HART is giving free rides for students to pick up free breakfast and lunch while school has gone digital-only.

HART bus driver Vera Johnson says the problem is HART switched from running its busiest routes every 15 minutes to running them every hour.

HART says that’s because of “closures along routes, reduced demand for service, and in support of Hillsborough County's 'Safer-at-Home' order.”

But since that switch happened, Johnson says buses have been packed.

“I absolutely don’t feel safe,” said Johnson. “My anxiety is high because I’m at a higher age.”

An essential worker who needs to get to their job may not want to wait another hour for the next bus just because the bus that’s available now is crowded.

“I have grandbabies,” said Johnson. “I can’t hug them because I feel like I’m out there in the front lines. We all are, all them bus operators.”

Another HART driver, who didn’t her identity made public because she’s worried about getting in trouble at work, says she’s waiting on her COVID-19 test results.

She says she was in daily contact with the HART employee who got COVID-19, started feeling sick last week, and has been isolating from her husband and kids.

“And I’ve just been sitting here waiting on it. You know, I’m having anxiety attacks and it’s just crazy,” the driver said.

According to the two biggest transit workers unions, more than 20 transit workers nationwide have died from COVID-19, and hundreds more have tested positive for the virus.

It’s not just drivers who are worried; riders are, too.

“You have turned riding the bus into a dangerous situation with this new schedule…We were unable to social distance and there were 2 to a seat in some cases,” one commenter wrote on HART’s Facebook page.

“My bus went from 6 people to about 20. It felt very unsafe,” another commenter wrote on HART’s Facebook page.

10Investigates wanted to know how a comparable transit authority is dealing with social distancing, so we checked with Pinellas Suncoast Transit Authority, or PSTA.

Both PSTA and HART have about 12 million bus riders a year.

PSTA has been allowing drivers to limit the number of riders on their buses to 10 people since March 21.

“I’ll just tell you what I heard – what the staff told me: That they got a call from someone at PSTA saying they were having more confrontation with drivers because of what they’re doing,” said Miller.

10Investigates reported in February that HART saw a 220 percent increase in attacks on drivers last year.

PSTA disagrees that the 10-person limit is causing more conflict.

Earlier this month, HART started putting laminated signs in chairs telling riders to “use staggered seating” and “maintain distance between others.”

“I think we have to take this step and see if it is effective. If it’s not effective, we’ll have to take further steps, certainly,” said HART Board member Mariella Smith.

RELATED: HART offers free rides for students to get breakfast and lunch

HART’s spokesperson Carson Chambers says the transit authority has “plug buses” on standby around the county to relieve routes that are getting crowded.

But, this week, the union told 10Investigates a driver of a crowded bus who called dispatch asking for relief from a plug bus was told to keep driving.

“At times, there may be an instance where Operations Control will tell a bus operator to keep going. That is only due to the fact that, for a variety of factors, a plug bus may not be available. HART’s first commitment is taking people where they want to go, when they want to go and to not leave customers stranded,” said Chambers in an email to 10Investigates.

If you want a behind-the-scenes deeper dive into this topic, check out the first episode of our new YouTube series What’s Brewing.

Subscribe to The Deeper Dive channel for weekly deep dives into the issues affecting you during the COVID-19 pandemic.