She went to a Tampa hospital for surgery. Her family says she left with a deadly infection. She’s not alone.

At least eight Florida surgery patients have filed lawsuits over infections caused by bacteria that can hide in water: nontuberculous mycobacteria, or NTM. 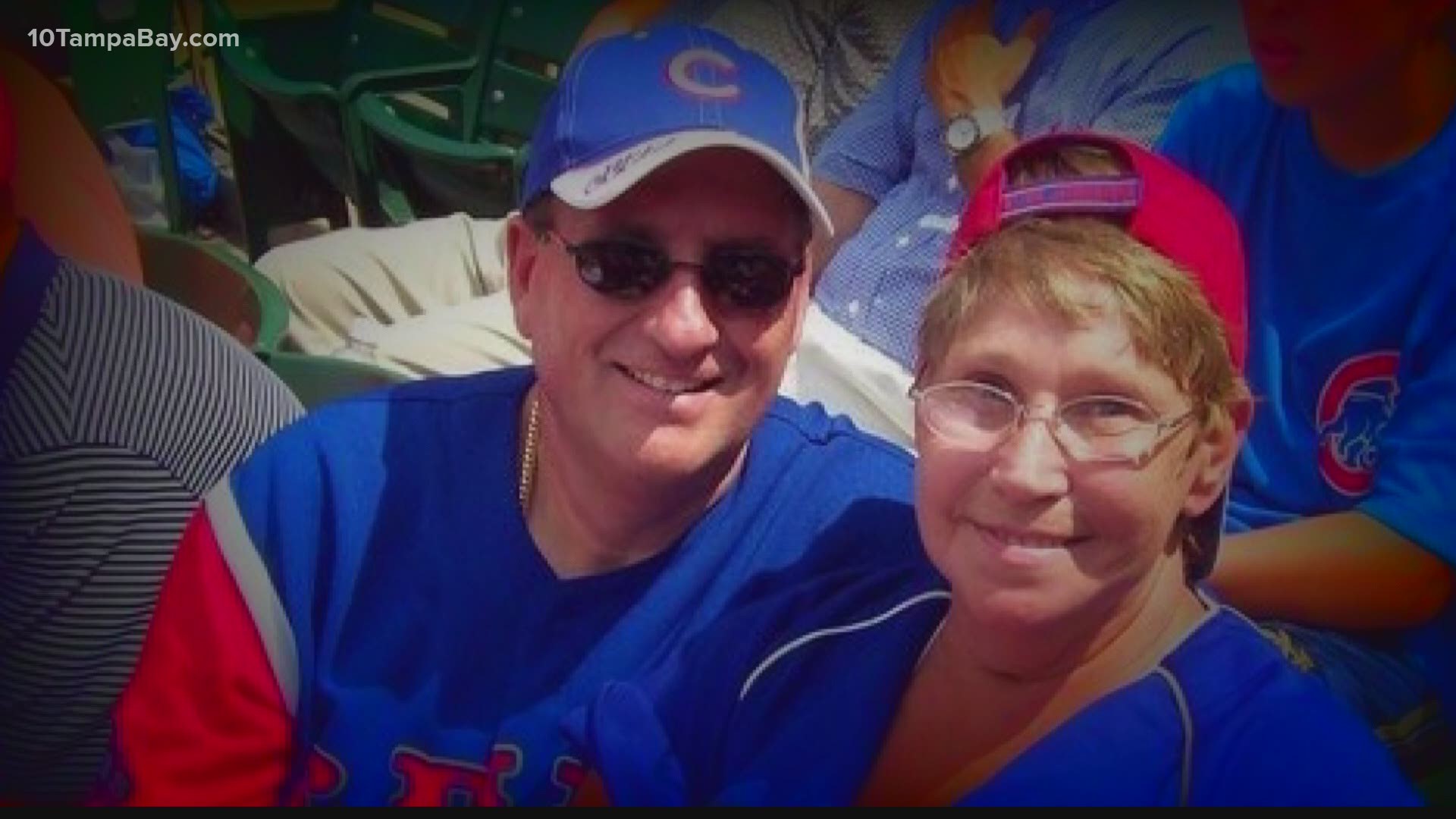 10 Investigates found something hospitals use every day could be hurting some patients, even killing them: Tap water.

At least eight Florida surgery patients have filed lawsuits over infections caused by bacteria that can hide in water.

Gerardi’s family thought her lung transplant at Tampa General Hospital was a step toward a healthier and happier life.

“She was like a mom to me. A best friend. I miss her. There isn’t a day that goes by that I don’t think of her and wish she was still here,” said Marshall.

According to her family’s lawsuit, Gerardi died from an infection called nontuberculous mycobacteria, or NTM. 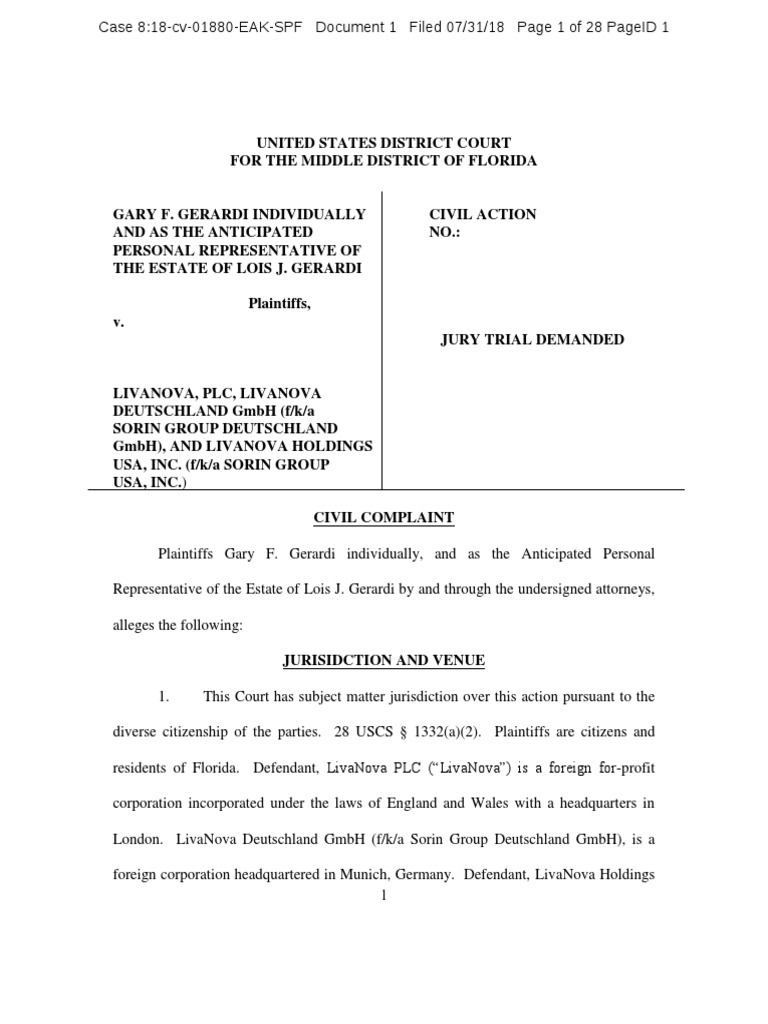 It’s not unusual for NTM to be in tap water. It’s typically not a threat to healthy people.

But for vulnerable patients, the bacteria can be dangerous, even deadly.

"A patient with a harmed or an ill immune system who cannot fight it, they are much more prone," said hospital safety expert and president of LFM Health Care Solutions Dr. Lawrence Muscarella.

According to the Centers for Disease Control and Prevention’s most recent data, far more people died in 2017 from NTM infections than the more well-known Legionnaires Disease.

So, how common is it in Florida?

That’s hard to track because medical facilities aren’t required to report individual infections to the state.

10 Investigates found eight federal lawsuits filed by Floridians who say they got NTM infections from a machine used during their surgeries.

Three of those Floridians died.

NTM infections happen all over the country, but the highest number of deaths happen in the Southeast.

At Duke University Medical Center, an NTM outbreak from 2013-2015 was linked to nearly 100 patients getting infected.

Twenty-six of them died.

The cause was routine care with hospital tap water and unfiltered water used in a machine that regulates body temperature during surgery.

None of the Florida lawsuits 10 Investigates found were against the hospitals. They were all filed against LivaNova, the company that makes 3T Heater-Cooler machines.

The machines aerosolized water, turning it into mist during surgery.

If that water had NTM in it, it could cause infections, according to research published in the Journal of Hospital Infection and the U.S. Food and Drug Administration.

But public health experts warn NTM infections often start with the hospital water that goes into the machines.

Some hospitals have made changes to help prevent NTM in their water. Duke installed water filters in operating rooms and made engineering changes, like increasing water flow to better flush their pipes.

Greenville Health System in South Carolina installed water filters in operating rooms in 2014, after more than a dozen patients were infected with NTM during surgery.

“It felt like something is just pulling me apart in there. A claw, or something, just stretching my insides out,” said Fowler.

But, what about the Tampa Bay hospitals where patients who sued LivaNova had their surgeries?

In 2018, Florida’s Agency for Health Care Administration said Tampa General Hospital didn’t have a procedure to identity waterborne pathogens, among other issues, and fined them $12,800.

The state agency also said three patients in 2017 had “mycobacteria-nontuberculous” documented by the hospital that year – but TGH’s infection preventionist didn’t investigate how the patients were infected and couldn’t rule out that the infections came from the hospital’s water.

Both TGH and the state tell us the hospital corrected those problems in 2018.

TGH would not do an interview for this story, but spokesperson Jennifer McVan emailed 10 Investigates this statement:

“The health & safety of our patients is our number one priority. Tampa General Hospital cannot make any comments about a specific patient because of patient confidentiality. We also can’t discuss a lawsuit in which we are not involved. The defendant in this case is LivaNova. In response to the CDC alert issued for the Sorin 3T heater-cooler system, Tampa General Hospital stopped using these systems and found replacements almost three years ago. Tampa General maintains the highest standards for patient safety.

We currently rank in the top 10th percentile for patient safety among U.S. academic medical centers as a member of the Vizient University Health System Consortium, the largest such network in the country. Again, the health and safety of our patients, families and team members will always be our top priority.”

Johnson would not confirm whether any NTM testing has actually been done at Northside.

“Northside Hospital is committed to providing our patients with high quality healthcare services, compassionately and safely. When the hospital, like hospitals across the country, received notification of issues with the LivaNova 3T Heater-Cooler systems equipment in 2016, the hospital immediately performed and adopted the new cleaning protocols. Letters were sent to patients who potentially could have been impacted and a notice was published on the hospital website. Northside Hospital has not in the past been notified of any infections related to the LivaNova system by any of our patients. This communication from News Channel 10 is the first time we have heard about it.”

The federal government warned hospitals about the infection risk from LivaNova 3T Heater-Cooler machines in 2016.

Hospitals across the country started following new cleaning instructions for the machines after that warning, but infections nationwide haven’t stopped.

The FDA has received more than 400 reports of NTM-related deaths, injuries and other problems connected to those machines even after hospitals started more rigorous cleaning.

“Due to ongoing litigation, we will not comment on the data at this time,” said LivaNova VP of Corporate Communications Deanna Wilke.

Wilke said LivaNova got FDA clearance earlier this year for a change to their machines that reduces the risk of aerosolizing water. She emailed 10 Investigates the following statement:

“Care for our patients and the quality of our products are at the forefront of everything we do. Over the past several years, and in consultation with regulatory agencies worldwide, LivaNova implemented a device remediation plan to address the use of heater-coolers during open-heart surgery to further mitigate the already low risk of contamination.

The three-part remediation plan developed by LivaNova consists of a device loaner program, a deep-cleaning service for 3T Heater-Cooler users and a modification of the 3T Heater-Cooler design to include internal sealing and the addition of a vacuum system for new and existing devices. These changes are intended to further reduce the risk of possible dispersion of aerosols from the 3T Heater-Cooler device in hospital operating rooms.

LivaNova continues to work closely with regulatory agencies around the world to address the issue of heater-cooler use during open-heart surgery and remains committed to ensuring continued clinician access to this important device that enables lifesaving cardiac surgery.”

Cheryl Marshall hopes this doesn’t happen to any more patients, so other families don’t have to go through the same heartbreak.

“We’ve all never been the same since she left,” Marshall explained through tears.

None of the Florida NTM infections in this story were reported to the state.

The Florida Department of Health told 10 Investigates that facilities only have to notify them about NTM if there’s an outbreak.

Two NTM outbreaks were reported to the agency since 2015 – one at a Collier County pain clinic in 2017 and one at a Miami-Dade tattoo parlor in 2015.

So, when it comes to individual cases -- patients like Lois Gerardi -- the state gets left in the dark.

“People go to hospitals because they expect to be made healthy. They’re in compromised physical and medical conditions. They should be able to rely on the safety of hospitals, hospital staff, and hospital atmospheres, environments. And so, to the extent that this fails them, it makes me feel very upset,” said State Senator Darryl Rouson, a St. Petersburg Democrat representing the 19th District.

Sen. Rouson is a member of the Florida Senate Committee on Health Policy.

After 10 Investigates shared our findings with Sen. Rouson, he sent a letter to State Surgeon General Dr. Scott Rivkees, calling on the Florida Department of Health to ensure “proper reporting of NTM infections in our state.”

The senator’s Aug. 27 letter also said he’s “interested in filing legislation that would require such reporting.” 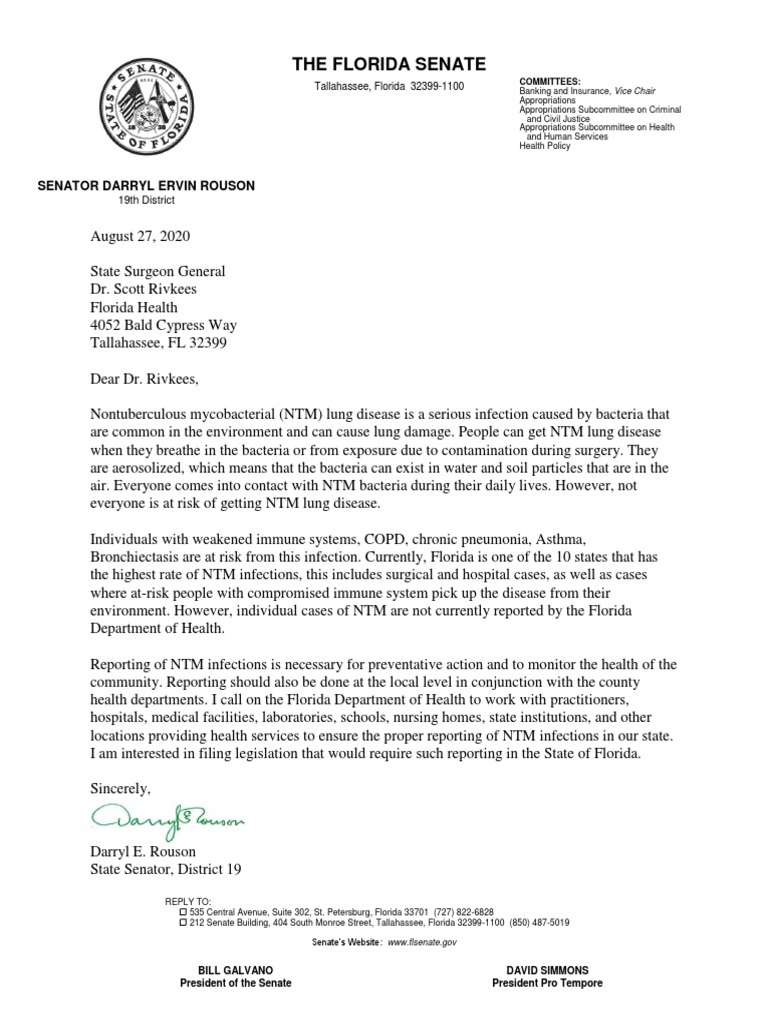 State Senator Darryl Rouson Letter | Public Health | Infection
After 10 Investigates shared our findings with Sen. Rouson, he sent a letter to State Surgeon General Dr. Scott Rivkees, calling on the Florida Department of Health to ensure "proper reporting of NTM infections in our state." PDF, TXT or read online from Scribd Did you find this document useful?