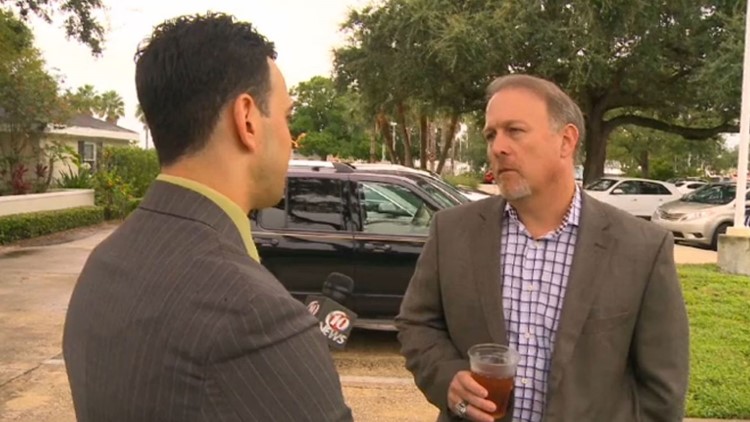 Ken Hagan and me: how did we get here?

TAMPA, Fla. (Noah Pransky) -- As reporters, we never want to be part of the story. But let's face it: Ken Hagan's feud with me reached mainstream comedic proportions last Friday, when he stood in front of two dozen cameras and said he wouldn't answer my question regarding what kind of financing county officials were discussing behind-closed-doors.

Then, in a well-choreographed exit at the conclusion of the press conference, Hagan scurried to the back door and had a consultant restrain me while he sprinted to a county car (with chauffeur) awaiting outside.

Many of you have asked me in recent days how we got here. Well, it all started early on in the stadium saga.

Since Hagan self-appointed himself lead negotiator for Hillsborough County on the Rays-to-Tampa effort in 2010, I've been asking watchdog questions about how the cash-strapped county will pay for it.

If you don't think those are important questions, talk to taxpayers in Miami. Or in Cincinnati. Or in Cobb County. After all, Hillsborough County already is failing to fund necessary roadwork and won't spend money on much-needed transit.

Which is why, several years ago, I identified how Hagan was shifting from the conservative tax hawk that got him elected in 2010. He started talking more about offering the Rays incentives to dump their partners in St. Pete and come across the bay.

Hagan pushed back, claiming he never said "no public dollars" for a stadium...except the proof exists...in several different places. Then he did it again in 2013.

There were other key moments in our professional relationship:

2015 - Connections to political consultant & public records problems: I aired the product of a year-long investigation into how a closely-tied political consultant and lobbyist, Beth Leytham, appeared to use her relationship with Hagan and other politicians to exert influence on big government deals behind-the-scenes. Hagan didn't like the story, and also failed to comply with public records requests, ultimately getting rid of his cell phone before sheriff's deputies could investigate what happened to his text messages.

2016 - Secret stadium negotiations: I took to Facebook to call out Hagan and others for their broken promises on transparency.

2017 - Hillsborough Man of Mystery: It was a chance to catch up with the commissioner about all the issues he wouldn't return my calls on: secret stadium funding, public record problems, free tickets he didn't disclose, and handouts for Hollywood productions.

2017 - The pop-up video: We tried to get real answers to real questions...but instead, the commissioner resorted to a well-rehearsed line about "irresponsible and misleading reporting"...16 times. So naturally, we posted the entire video.

2018 - Ybor City announcement: After Hagan admitted leaking news of the Ybor deal to a friendly news outlet back in October so I didn't get it first, I've broadcast a series of Hagan-related investigations based on public records, including all the campaign money he's received from the individuals who stand to gain from the secret stadium dealings.

I still can't figure out who is giving Hagan his advice, but I'd contend its not very good advice. It's not just my stories, but his fellow commissioners are distrustful and his "partner" in this dance, Tampa Mayor Bob Buckhorn, called him "bush league" and a "minor league politician."

Anyway, if you really want more, here's a few other links you can kill your work day with: