Those fees were supposed to pay for student activities, not other students’ tuition. 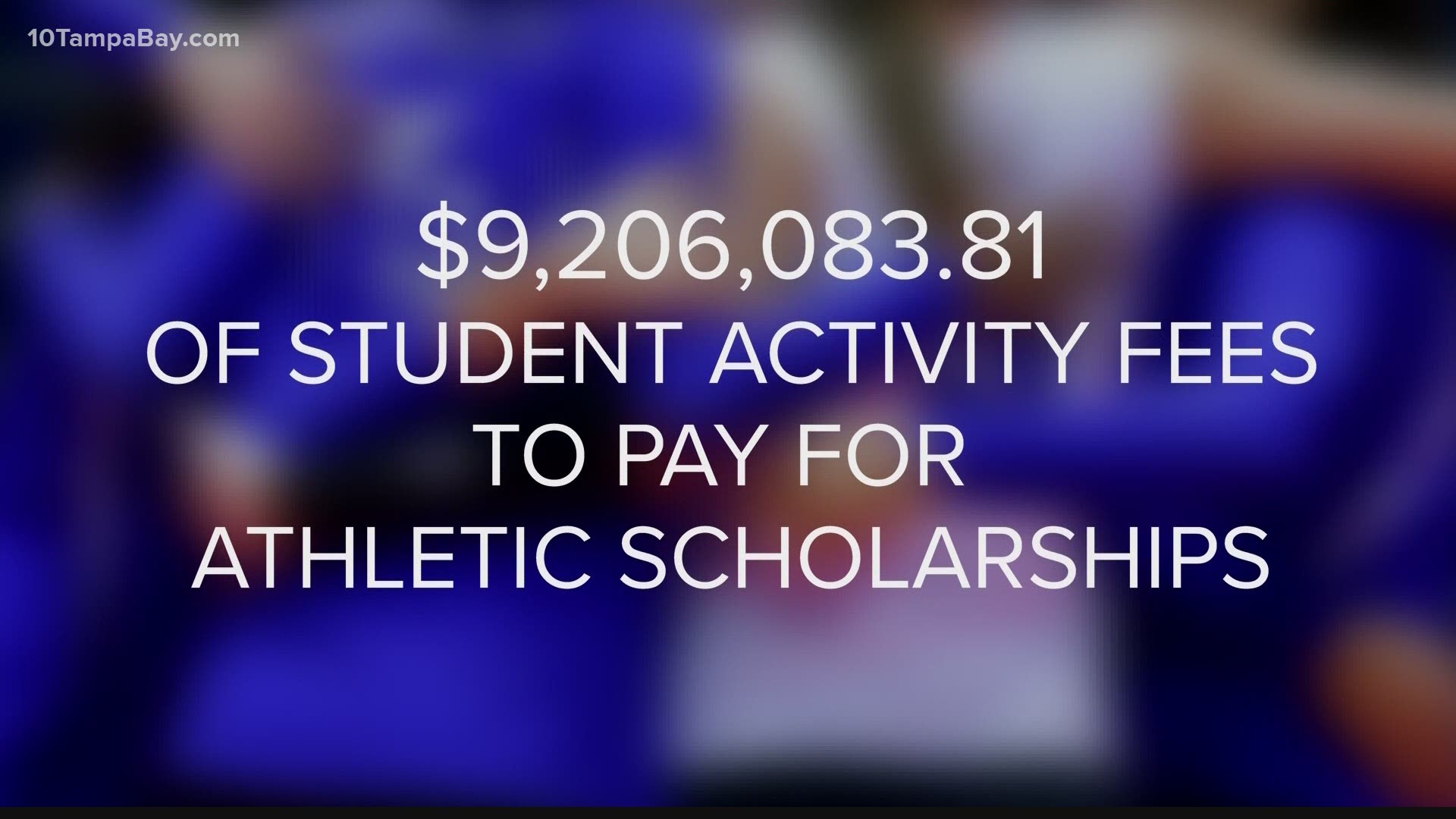 ST. PETERSBURG, Fla. — This story is the latest installment in our YouTube series, "What's Brewing,” investigative reporter Jenna Bourne's series of homemade deep dives into important issues during the coronavirus pandemic. Click here to check out the series and subscribe to our YouTube channel: The Deeper Dive.

It went unnoticed for 17 years.

“Many people have to take on a ton of debt, not only to pay for tuition, not only to pay for books but also to pay for all these extra fees that come with their education,” said Cody Hounanian, program director at Student Debt Crisis, an organization that advocates for people with student loan debt.

One of those is the student activity fee.

It’s supposed to go toward things that benefit the student body in general, like student organizations.

But St. Petersburg College has been misusing millions from those student activity fees to pay for individual students’ athletic scholarships – and that’s against Florida law.

In a report published in November 2020, The Florida Auditor General found that, in 2019, St. Petersburg College improperly used $453,172 from student activity and service fees to fund 89 student athletic scholarships.

That’s 10 percent of those fees just going to athletic scholarships.

“When we went back and looked after the audit, it had been something we’ve done for 17 years. And so, that precedes me, and so I’m not really sure and can’t say why we started doing this in the first place,” said St. Petersburg College Vice President of Student Affairs Dr. Jamelle Conner.

And that adds up.

Over those 17 years, the college used $9,206,083.81 of student activity fees to pay for athletic scholarships – fees paid by students that were supposed to go toward student activities, not to pay for other students’ tuition.

“This is money coming out of the pockets of struggling students and young people. This is the money coming out of pockets of parents investing in their children’s education, even when they maybe don’t have enough money at home to support their lives,” said Hounanian. “Often, what comes up is that these athletic programs are big money-makers. And that’s a huge misconception because, in a majority of schools across the country, athletic programs – including football programs—are a loss.”

“Most of these programs don’t make money. They lose money. Even – you can take probably 15 Division 1 college football teams that make money. The rest of them lose money,” said Sanderson, a Senior Instructional Professor at the University of Chicago’s Department of Economics.

10 Investigates asked Sanderson how an institution like St. Petersburg College, which doesn’t have a football team, benefits from giving athletic scholarships.

“I can’t conceive that it does,” said Sanderson.

But the school confirms none of those scholarships were funded by student activity fees – only athletic scholarships.

“The student activity fee is supposed to be used for the general benefit of the students. And our athletic program is funded out of student activity fees – and that’s absolutely allowable. And the program, within the program, included athletic scholarships for those students,” said Dr. Conner. “Since the operational audits were coming in clean, there was never really a question, right? There wasn’t anything that raised any alarms that seemed for that to be out of place.”

10 Investigates asked the Florida Auditor General’s Office why this hasn’t come up in the college’s previous audits.

The bottom line is they don’t audit everything every time.

“An audit by its nature does not include a review of all records and actions of management, staff, and vendors and, as a consequence, cannot be relied upon to identify all instances of noncompliance, fraud, waste, abuse, or inefficiency. Because audit efforts cannot practically extend to all areas of an entity’s operations, the scope of each operational audit is limited and varies based on a risk assessment of the particular entity under audit. Responsibility for the design, implementation, and maintenance of internal control relevant to St. Petersburg College operations and compliance with various provisions of laws and rules rests with College management,” Florida Auditor General Audit Manager Jaime Hoelscher told 10 Investigates in an email.

We reached out to a bunch of student organizations at St. Petersburg College to find out how they feel about the way their money was spent but didn’t hear back.

Instead, 10 Investigates heard from the college’s marketing director that she found out we were reaching out to students, and the college would like to set us up with one.

“I only found out [about using the fees for athletic scholarships] recently and basically because of your investigation,” said St. Petersburg Gibbs Campus Student Government Association Vice President Christy-Lynne Lapine.

“It actually doesn’t bother me… The fact that [the activity fees] go toward scholarships, they go toward helping put people into the position of being students, into this experience of college life, and continuing their education, and bettering themselves – honestly, that’s a perfect way to spend this money,” said Lapine.

Except that it’s against Florida law.